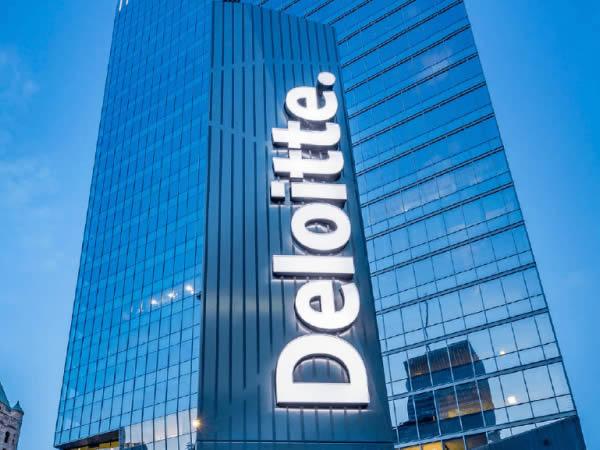 The Cadillac Fairview Corporation Limited, along with its major tenant Deloitte, has helped create the first, new, privately-owned and financed commercial office tower in more than 20 years to be built in the city of Montreal, Quebec.

This marks the first step in a $2 billion multiyear plan to develop a prime sector of downtown Montreal creating a vibrant new neighborhood known as Quad Windsor.

The tower is located next to the heritage-designated Windsor Station entertainment venue and connects directly to the Bell Centre, home of the Montreal Canadiens professional hockey team.

The spirit of the city is seen as alive and strong in this setting, despite its cold climate.

Cadillac Fairview has initiated a nationwide effort known as Green at Work.

This program tracks energy consumption, water usage and waste diversion in developments that the company manages across Canada with the objective of progressive improvement each and every year.

For the Deloitte Tower, the decision was made to target a LEED® Platinum CS certification for the Core and Shell of the building.

Tenants, including Deloitte, are subsequently requested to pursue LEED® CI for Commercial Interiors at the gold or platinum level.

This progressive approach puts the development and its tenants at the forefront of sustainable office design in Canada.

The intent is to realize energy cost savings of 35-40% and reduced greenhouse gas emissions from lower power consumption.

Other goals of the certification include sustainable site work, water conservation, indoor environmental quality, and sustainable use of materials and resources.

Early in the planning phase, the architectural teams collaborated with glass and curtain wall fabricators to ensure the best possible selection of suitable products to optimize both the energy efficiency and the visual appeal of the building.

They ultimately settled on a curtain wall design using lightly tinted grey vision glass to allow abundant daylight to enter virtually the full width and over 80% of the height of the perimeter walls on all of the office floors, which also affords spectacular vistas of the city in every direction.

Grey tinted windows are an upcoming trend in architecture, according to the Efficient Windows Collaborative.

Based on these characteristics, Guardian Industries glass, color AG50 crystal grey, was specified by the architects for the glazing. 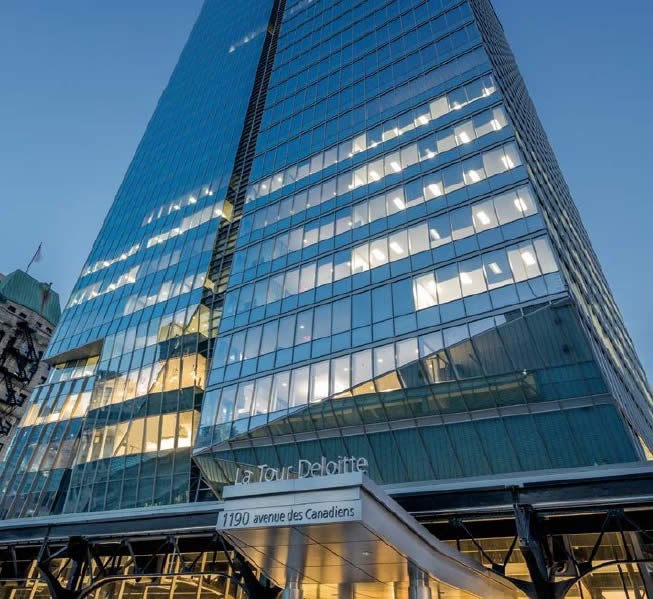 In order to control heat gain and loss, the glazing in the project is made up of dual pane insulatinsulating glass units (IGUs) with a low emissivity (low- E) grey colored coating on the inside surfaces.

The glass supplier and fabricator of the IGUs was Multiver Ltée of Quebec. Throughout the planning and design process, they assisted the architects with performance calculations, color selection, and other support.

They recognized that the total performance of the glazing would be influenced not only by the glass itself but by the individual products that held the dual panes together, commonly referred to as glass spacers.

Numerous independent tests and certification organizations have confirmed that selecting an inferior glass spacer results in the edges, as well as the center of the glass, performing poorly in terms of heat transfer.

If the seal along the edge of the spacer does not hold up, then air and water vapor can seep into the glass space otherwise filled with an inert gas.

When that happens, the glass appears streaked or stained on the inside and performs even worse.

Further, in cold climates like Montreal, condensation can form on the inside of the glass along the cold edges causing other problems for the building components nearby.

Together, the architects and Multiver researched and chose glass spacers manufactured by Technoform Glass Insulation (TGI) since they met their design criteria for both excellent energy efficiency and the ability to meet unique aesthetic requirements.

Specifically, they selected a 17/32” (13.44mm) TGI®-Spacer in a light grey tone to match the glass color beautifully.

• To maintain a congruent aesthetic appearance throughout all glass units, Multiver also used the TGI®-Spacer in the spandrel glass panels they provided. Opaque spandrel glass is used in areas that do not require vision glass, such as the horizontal sections along the floor lines where concealing the structure and other building components are required.

Putting It All Together – The Curtain Wall System 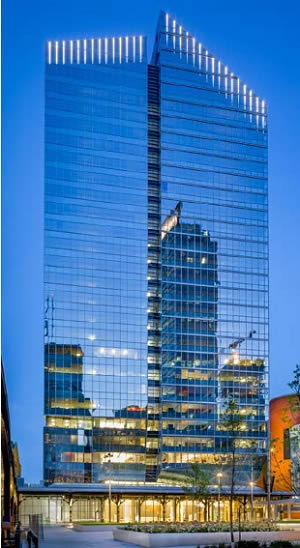 Epsylon is known as a leader in specialized high energy efficiency curtain walls making them ideal to meet the demands of the Deloitte Tower project.

They also conduct an evaluation of all their products in regard to LEED certification for materials and vetted all products for compliance with the LBC “Red List” of 14 potentially toxic substances.

Because of the size and expanse of the curtain wall system, a pre-fabricated, unitized system was quickly determined to be the best choice.

Generally, these systems are used on mid-rise to high-rise structures that are 20,000 square feet and up where there is high repetition, tight job site access, and high installation labor costs.

These systems hold up over time better than others because each curtain wall panel is installed to be able to expand and contract independently from the supporting structure and retain its ability to be completely weather tight.

Traditional curtain wall systems use continuously gasketed aluminum pressure plates or caps that can conduct large amounts of heat in or out of the façade resulting in “thermal bridging”.

Structurally glazed curtain wall systems consist of glass that is bonded or anchored back to a frame with engineered silicone sealant that can reduce or eliminate the thermal bridging along the joints between adjacent IGUs.

The aesthetic benefit of a structural silicone glazed system is the creation of greater transparency than traditional systems.

There are less visual interruptions due to the lack of metal on the exterior, creating a seamless, continuous glass look. This system creates a completely clean, flush exterior appearance with superior energy performance.

It can also be much more technically complex than a traditional system so the skill and quality control of the Epsylon team was heavily relied upon.

It is a pre-fabricated, unitized system, with structural silicone on 2 sides that allows multiple glazing types and materials to be combined into one ‘unit’ in a quality controlled shop environment.

Precision is needed in sealing the units together since there is no outside metal frame to cover any irregularities or imperfections.

That goes for the glass spacers used too, since in some cases they can be left partly exposed and create an unintended visual appearance.

The TGI®-Spacer used in this project extends the colored polypropylene through an extended sidewall ensuring minimal opportunity for stainless steel peek through and overcoming this common quality control issue on structural silicone glazed units.

After the IGUs and spandrel glass are glazed into unit frames within the shop, they are transported and installed at the job site by crane.

The installed units then receive additional silicone and or EPDM gaskets on the exterior creating “stack joints” as the complete air and moisture barrier of the system allowing a weep at each floor.

The Deloitte Tower is a stunning example of design and functionality coming together beautifully by paying attention to the details of the glazing system.

The collaborative effort of the owner, design team, fabricators, and installers created an environment that eliminates visual barriers offering a desirable and productive office setting.

All in all, with the goal of LEED Platinum, the Deloitte Tower will certainly be a jewel for the downtown Montreal area. The TGI-Spacer played an appropriately subtle but very important role in seeing these results achieved. 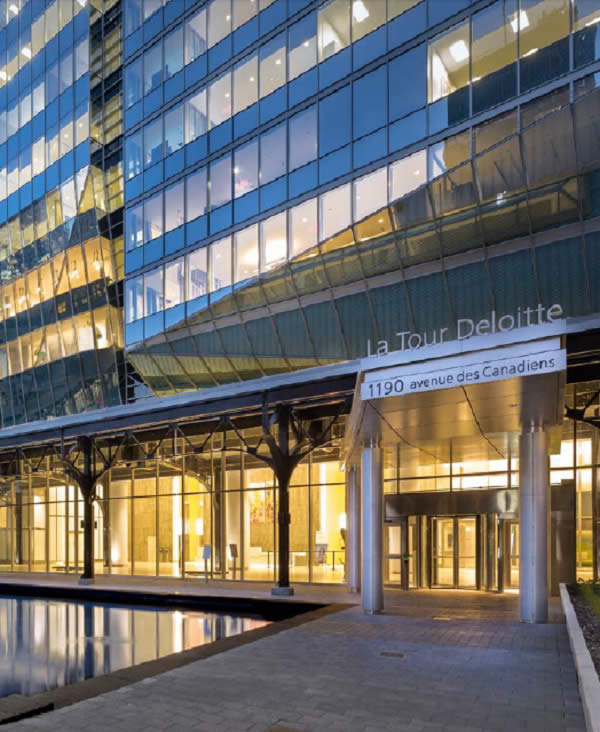 Multiver V.P. of Operations, Luc Cormier states “Our prebuild simulations clearly indicated that the TGI®-Spacer offered superior Ufactor, vapor barrier, site-line temperature and condensation resistance - exactly the rifght combination of quality, value and appearance for the tower project. We asimply could not achieve this any other way.”

The Aesthetics of Color in Architecture Glass Facades
Research deals with the effect of using color in aesthetic taste of architectural interfaces as one of the most important problems affecting the architectural form.
Glass Constructions Under Extreme Boundary Conditions
Constructions at exceptional locations are often challenging but worth one’s while. Extreme boundary conditions and sophisticated demands of the client have to be considered.
20 Farringdon Street - Case Study
Unitised Façade System Designed with a Highly Transparent Façade of Low G-value Combined with Blast Requirements
Smart products in the façade: Dynamic glazing III
This article is dedicated to dynamic glazing in the façade. This is an update of the articles on smart products in the façade I and II published in March 2019 and May 2020.
Structural glass: A new remedial tool for the consolidation of historic structures
This research investigates the potential of glass as a new design tool to highlight and safeguard our historic structures.
Experimental Study on Thermoplastic Interlayers in Laminated Glass Using Fiber Optic Strain Sensors
The study describes the results of the principal applicability of fiber optic strain sensors to evaluate the structural behaviour of laminated glass and provides the basis to define a model for the material characteristics of viscoelastic interlayers. 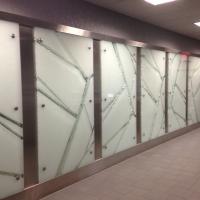 Şişecam is preferred for the office building: The Ilbank Atasehir Tower