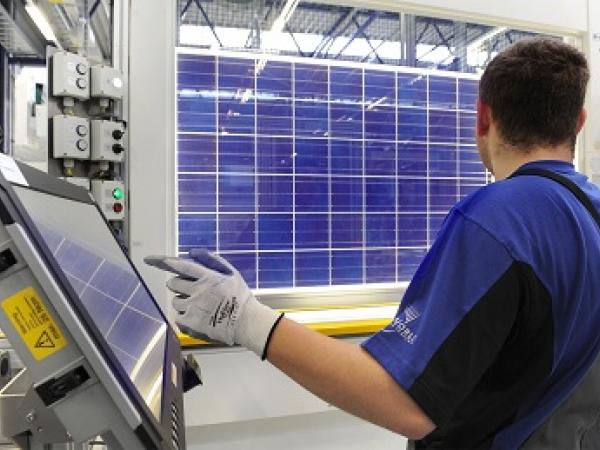 Although the costs for solar power have come down considerably lately, photovoltaics are still unable to compete with conventional energy sources.

The “last mile” to competitiveness will therefore prove difficult for the sector: Cell and module production have already been rationalised substantially. Companies now need to increasingly focus on innovations in raw materials and components.

Analysts agree: After two years of consolidation the global PV market is picking up again. US-based market research company NPD Solarbuzz expects global demand for PV to reach between 45 and 55 Gigawatt this year after 37 Gigawatt in 2013. Experts expect strong growth especially in Asia as well as in North and South America. This means that alongside the established markets in Europe new regions will soon emerge on the PV landscape.

Markets are driven by solar power feed-in-tariffs designed in line with Germany’s Renewable Energies Act. To the tune of 60 countries have introduced this type of subsidy now and, at the same time, PV systems are becoming more affordable by the day. According to the trade portal pvXchange, prices for an average turn-key system with crystalline modules from Germany dropped by some 25% to around EUR 1,500 per Kilowatt.

This price dumping can be attributed to the keen competition prevailing in the PV industry. In China, in particular, solar energy component factories have been virtually springing up like mushrooms over the past few years thanks to state subsidies. “In China this is encouraged by the state: Chinese manufacturers wish to dominate this promising future market at any cost,” explains business consultant and China expert Frank Haugwitz. The over-supply of solar modules is forcing producers to offer drastic discounts.


Price battles are starting to affect the very substance of the European solar industry. According to current data provided by the German Statistical Office, over half the 10,200 jobs at German module producers have been lost since 2012. For the first time in almost four years employment has fallen below the 5,000 threshold.

On the other hand, PV now boasts comparable power generation costs with conventional power plants thanks to this price landslide; in some very sunny regions solar power is even competitive already. In the South West of the USA large solar power plants can produce one Kilowatt hour for as little as 0.08 cents – almost as inexpensively as gas and coal-fired power plants.

To cut costs even further, however, the solar industry will need to make major efforts. “In cell and module production the savings to be expected will not be as dramatic as over the past two years,” says Florian Wessendorf, General Manager of the Association for Photovoltaic Components in the German Engineering Industry Federation VDMA, and explains that technical innovations have already been largely implemented here.

But the industry has other cost-cutting options. One approach is the so-called Balance-of-System costs. In PV these costs describe all the costs incurred for components and services required for installing fully operational solar systems at a site – excluding module costs. This includes costs for inverter, substructure, wiring or mains connection. At present, these items account for about one third of the total costs of a solar project.

Photo 3 - Thin yet extremely stable: these days solar glass is only 2 millimetres thick. This saves material costs and makes glass-glass module production possible. These come with a robust glass sheet rather than a backsheet. Photo: F-Solar

There are still some efficiency gains to be “reaped” in the upstream stages of the value chain such as glass manufacturing. According to data by Heiko Hessenkemper, Professor of Glass and Enamel Technology at the Technical University (TU) of Freiberg, cover and carrier glass currently costs some EUR 80 per Kilowatt hour of module output. This means, glass accounts for at least 10% of the present module prices of EUR 600 to EUR 800 per Kilowatt hour. Hessenkemper believes that this proportion can be cut by two thirds to some EUR 30 per KWh by relatively simple means.

“There are materials that can be easily separated from the gaseous phase and deposited on the glass. These increase the toughness of glass while reducing reflections at the same time,” explains Hessenkemper. This simple method of surface modification, which does not even require any process changes to glass manufacturing, means you can cut out the thermal pre-stressing that has been required for glass toughening until now.

This hardening process gives glass sheets the characteristics of elastic yet resistant bodies that protect the sensitive solar cells against weather impact for many years. However, the process is both energy and cost-intensive: The sheets are first heated up to over 600°C and then quickly cooled off starting with the surface, thereby transferring them into a state of residual stress.

According to Hessenkemper, although gaseous phase separation is already fit for commercial use and currently being tested primarily by Asian glass producers, the technical approach pursued by the Friedrich-Alexander University Nürnberg-Erlangen (FAU) and its project partners is still in the research stage. Scientists there are working on types of smart solar glass that adjust the sunlight to the spectral sensitivity of solar cells with the help of fluorescent materials. This way the power yield of the cells can be improved and power generation costs can be reduced.

For years now scientists have been aware of a way to expand the spectral area of solar cells: using so-called “luminescence down-shifting” those parts of the sunlight that solar cells find it hard to absorbcan be converted into wavelength spectrums where the cells work very efficiently. The FAU project is specifically geared to converting high-energy, ultra-violet and blue light into low-energy, green and red light by means of an ultra-thin fluorescent layer.

According to FAU Project Manager Miroslaw Batentschuk, it is not necessary to change the established manufacturing technologies for solar glass overall – only parts of the coating need to be modified. Initial project results are very promising: “With thin-film solar cells based on copper, indium, gallium and selenium we have achieved efficiency improvements of up to 5%,” says Batentschuk.

Until such novel technologies as smart solar glass can be used on a commercial scale, the industry will implement more obvious innovations. For instance, since last year, in a joint venture with Interpane and the Dutch company Scheuten the German solar glass manufacturer F-Solar has offered float glass that is half the thickness of conventional solar glass: two millimetres.

“The reduced material input brings down the price. Furthermore, module manufacturers benefit from these thinner glass sheets for new products such as glass-glass modules,” says F-Solar CEO Thomas Keyser. In this type of module one glass sheet replaces the otherwise usual backsheet. This protects the embedded solar cells better against compression and tensile forces making them less susceptible to cell breakage. Furthermore, moisture can no longer penetrate modules so easily and damage the sensitive cells – module service life increases, modules produce more power and costs per KWh come down.

Since 2103 the solar producer Solarworld has offered glass-glass modules by the name of “Sunmodule Protect”. By company accounts, while these modules are as light as customary glass-backsheet modules of the same dimensions despite the additional glass sheet they age considerably more slowly.

The modules are said to work for 30 rather than 25 years and to lose less than 0.35 % yield per year. In general, producers today reckon on an annual degradation of 0.7 %. Solarworld is therefore considering to further upgrade the technical features of its new glass-glass modules.

At present, they still consist of conventional solar cells from multi-crystalline silicon. In future, highly efficient Passivated Emitter Rear Cells (PERC) with efficiencies of over 20% could be used instead – another of Solarworld’s new developments. To achieve this high efficiency the cell rear is provided with additional coatings that reduce both electrical and optical losses.

Another approach to increasing the efficiency of solar modules is offered by so-called anti-reflex layers on the front glass. Most of these are single-layer, nano-porous structures from silicon oxide. They reduce the reflection of the incoming light and increase the light transmission of the glass. Since more light hits the solar cells this additional energy increases the total efficiency of the modules by two to three percent.

According to Bürkle’s Product Manager Oliver Meisriemel, this process is ideal for avoiding material wastage and achieving a defined layer thickness. “Layer thickness variations are easy to identify through colour deviations. With our roller coater a technically and visually perfect surface can be achieved.”

At glasstec 2014 in Düsseldorf, the world’s biggest and most international trade fair for the glass industry and its suppliers, machine builders like Bürkle will be presenting their latest manufacturing technologies for solar glass production from 21 – 24 October 2014. Innovations for solar glass and solar modules will also be the focal theme of the “solar meets glass” Congress at the coming glasstec.

Here experts from the solar and glass industries will get together from 20 to 21 October 2014 to exchange ideas on the progress made in glass and module manufacturing as well as in materials and costs. Experts hope for a close alliance between the two sectors. Commenting on this glass researcher Hessenkemper said: “Glass still holds great innovative potential and one the PV industry has by no means fully tapped into yet.” Architectural Glass Laminating Guide - Part 8
PhotoVoltaic Lamination Process
Semi-Transparent Building Integrated Photovoltaic Solar Glazing
Investigations of Electrical and Optical Performances for Window Applications in Tropical Region
Investigation of thermal and electrical performances of a combined semi-transparent PV-vacuum glazing
In this work, thermal and electrical performances of a multicrystalline silicon based PV-vacuum glazing were characterised using indoor test cell.
Energy and Daylighting Evaluation of Integrated STPV Windows with Internal Light Shelves in Open-Office Buildings
Abatement of the high building energy is possible by employing semitransparent photovoltaic window which has triple point advantages as they control the admitted solar gain and daylight and generates benign electricity.
GlassBuild America 2022
See you next year in Atlanta!
Glasstec 2022
Check out the latest updates from glasstec