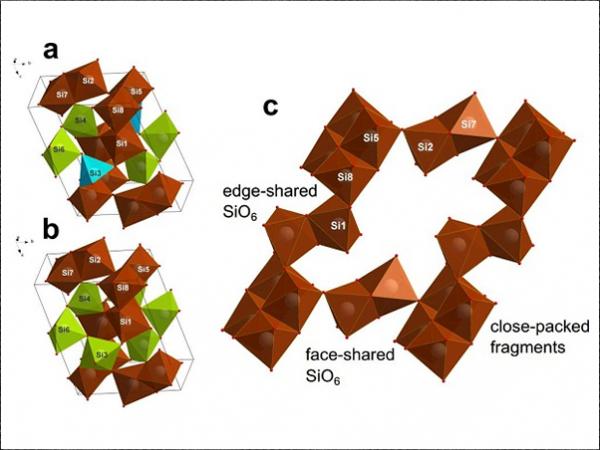 Photo source
Figures a and b show the spatial crystal lattice of coenzymes, and figure c shows it deployed on a plane where fragments of SiO6 are clearly visible, paradoxically connecting faces | Credit: NUST MISIS

NUST MISIS Scientists Discover “Impossible” Material according to the Laws of Modern Chemistry.

An international team of physicists and materials scientists from NUST MISIS, Bayerisches Geoinstitut (Germany), Linkoping University (Sweden), and the California Institute of Technology (U.S.) has discovered an “impossible” modification of silica-coesite-IV and coasite-V materials, which shouldn’t exist if modern laws of Chemistry are correct.

Their structure is an exception to the generally accepted rules for the formation of chemical bonds in inorganic materials formulated by Linus Pauling, who won the 1954 Nobel Prize in Chemistry for that discovery. The research results were published in the international scientific journal Nature Communications on November 15th, 2018.

According to Pauling’s rules, “vertices” connect the fragments of atomic lattice in inorganic materials, and since the compound by “faces” is the most energy-consuming way of forming chemical bonds, it should not exist in nature.

However, scientists have shown experimentally and proven using calculations conducted on NUST MISIS’s supercomputer that such a connection is possible if we put materials in conditions of ultrahigh pressures. The results obtained open up a completely new path in the development of modern materials science as well as a fundamentally new class of materials that exist in extreme conditions.

“The metastable phases of high-pressure silica, coesite-IV and coesite-V, were synthesized and described: their crystal structures differ sharply from any previously considered models. Two open coesite contain SiO6 octahedras, which unlike in Pauling’s rules, are connected via common edges, which is the most energetically costly way [to form] for a chemical bond. Our results show that possible silicate magmas in the earth`s mantle may have complex structures making them more compressible than previously thought”, said Professor Igor Abrikosov, head of the theoretical research group and the NUST MISIS Laboratory for the Modelling and Development of New Materials.

The research group, led by Professor Igor Abrikosov (NUST MISIS, Russia, and Linkoping University, Sweden), specializes in the study of the properties of materials under ultrahigh pressure. Placing materials in extreme conditions is one of the most promising ways of creating qualitatively new materials, which opens up fantastic opportunities for societal developments. For example, in one recent scientific work, scientists created material-nitrides which were previously considered impossible to obtain.

In the process of studying the modification of silicon oxide, the information about the structure and its mechanical properties are key for understanding the processes occurring in the Earth’s mantle, which exist at unthinkably high temperatures and pressures deep in our planet’s core.

Scientists have discovered that a special form of silicon oxide—polyester-coesite—undergoes a number of phase transformations at a pressure of up to 30 hPa and forms new phases (“coesite-II” and “coesite III”), which in their crystal lattice retain SiO4 tetrahedrons as their main structural element.

In the new experiments, scientists went further, compressing silicon oxide in a diamond anvil at over 30 hPa, and as a result saw structural changes in this phase using single-crystal x-ray diffraction. The results they obtained were unexpected — these structural changes will force an adjustment to generally accepted scientific canon, finding an exception to the tried-and-tested veracity of Pauling’s rules.

Two completely hitherto unknown coesite modifications (coesite-IV, and coesite-V) with structures (Pic. 1) exceptional and “impossible” from the classical crystal-chemical point of view were discovered: they have penta-coordinated silicon bordering with SiO6 octahedra, and simultaneously consist of four-, five-, and six-coordinated silicon. Some fragments of the atomic lattice are also connected by faces rather than vertices, which according to the generally accepted Pauling rules, is not possible. Kuraray takes initiative to enhance product sustainability through LCAs
Independent Life Cycle Assessments for Kuraray Poval™, PVB, PVB film and SentryGlas®.
Join Vitro for four live Continuing Education webinars this February
Earn AIA LU/HSW Credits with Vitro CE Webinars.
2023 FGIA Conference to Focus on Advances in Glazing, Windows, and Glass Safety
Don't miss out: Register now for the FGIA Annual Conference to learn about quality systems, innovation, and more!
Researchers Shed Light on the Physics Behind Glass Formation
An international team of scientists has discovered new insights into the physics of vitrification – the process by which glass forms.
HEGLA boraident LASERBIRD for glass panes up to 9,0 x 3,3 meters
HEGLA is proud to introduce the Laserbird, a system that can manipulate the top layer of a pane of glass up to 9,000 x 3,300 mm in size.
NGA Presents 2022 Annual Report
The report showcases the key accomplishments and objectives that NGA has achieved over the past year.