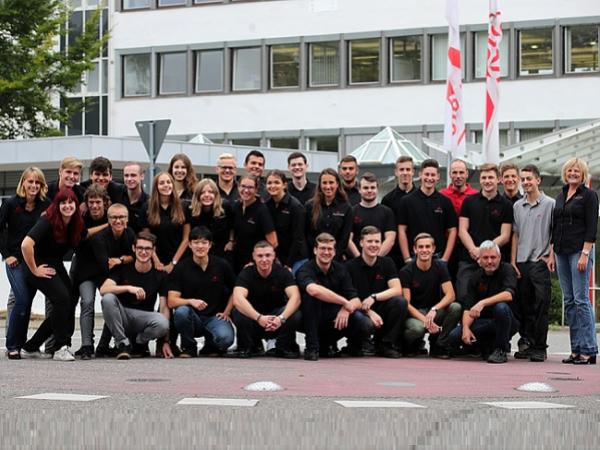 The shortage of skilled labour which is a serious problem that many industries frequently complain of is not only holding back growth, it could also have a negative impact on future economic development in general. This is why the issue surrounding the best way to attract and recruit hotly contested junior staff is a high priority within companies.

“This makes us attractive to enthusiastic prospective employees and regularly leads to us receiving awards from independent bodies,” explains Chairman of the Board of Directors Dr Eckhard Keill. The “special list of testimonials” has recently been added to once again.

For instance, the “Capital” business magazine gave Roto Frank a “5-star” rating as part of the “Best trainers in Germany” study conducted together with the “ausbildung.de” talent platform. This top rating awarded to the manufacturer of window and door products and systems was only attained by around another 150 companies, revealed the initiator of the survey.

One particular point to emphasise is that Roto earned the maximum number of starts, both in the main category of “Training” and in the subcategory of “Dual studies courses”. The survey was split into five topics: support and integration of the trainees, learning within the company, engagement of the company, prospects of success of the trainees and innovative teaching methods.

The second new award certifies that Roto is one of the “Top 1000 employers 2019”. To compile this ranking, “Focus-Business” magazine collaborated with the Statista and Xing portals and the Kununu assessment platform to find out which companies in Germany “employees are particularly satisfied with as employers”. The study covered 22 industries.

Opportunities at the hidden champion

Keill considers these independent testimonials as confirmation that the globally active group, which currently has approximately 4900 employees, offers “excellent working conditions and a variety of development opportunities.” They also act as an important tool for guidance and decision-making, especially for people who are just starting out in their career.

This ultimately also applies to the title of “Global market leader 2018”, which Roto was awarded in the “Window and door hardware systems” segment by the “WirtschaftsWoche” business news magazine on the basis of factual analysis conducted by the University of St. Gallen.

Ultimately, all of the different awards Roto has received for being attractive to current and future employees also plays a role here. “As a hidden champion, this also allows us to compensate for the fact that our company is less well known than large corporations,” highlights the Chairman of the Board of Directors.

Erika Dittmann-Frank adds that, in general, the company paves the way for talented young employees with good school leaving qualifications to take various career paths in the business and commercial / technical sector.

At the headquarters in Leinfelden-Echterdingen alone, 24 trainees and students are currently making the most of these opportunities. This number is set to increase to 30 on 1st September 2019. The company will then also start training specialists in metal technology for the first time.

A+W Software is participating in GlassBuild Connect
A+W Software is participating in GlassBuild Connect: The Glass & Fenestration Online Experience, taking place September 1-30, 2020
BAU 2021: Building the future together
Preparations for BAU 2021 are moving full steam ahead—and that includes the work of many highly respected exhibitors.
The Massive importance of Glassbuild
By now, the news of GlassBuild America in Las Vegas being cancelled is everywhere. Those of you who know me know that the news of this happening absolutely gutted me.
FENSTERBAU FRONTALE connected
FENSTERBAU FRONTALE is open for your industry dialogue.
GlassBuild is Going Online. Here's why I'm on Board.
When I think of fall, I think of two things: football and trade show season. For more than two decades, I have been representing FeneTech at trade shows.
New furnace for high-tech glass factory Ritzenhoff AG | HORN Glass Industries
The 30 tpd end fired furnace for crystal glass was modified together with the two production lines and partly equipped with furnace equipment by HORN.