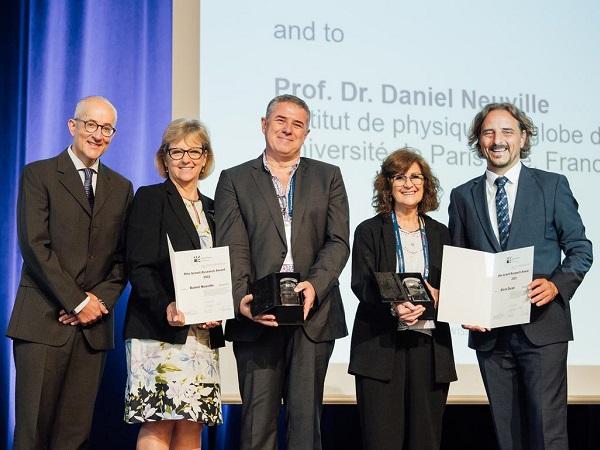 The Ernst Abbe Fund’s Board of Trustees recognized both Duran and Neuville as “…internationally renowned glass scientists, leaders amongst global industry and academic entities, who have given significantly to the glass community.” The prize is valued at 25,000 euros and is dedicated to outstanding scientific and technological achievements in glass, glass-ceramic, and related advanced materials. The award was presented for the 17th time on July 4, 2022, as part of the 26th International Congress of Glass in Berlin, Germany.

Awardee Professor Alicia Durán is a Research Professor at the Spanish National Research Council (CSIC), former President of the International Commission on Glass (ICG), and Chair of the United Nations International Year of Glass 2022. She is considered one of the most distinguished and versatile researchers on functional glass coatings. Her research is characterized by a very successful transfer of knowledge about glass structure to innovative materials with optimized properties for new applications, such as the optimization of glass-ceramic seals for solid oxide fuel cells or the synthesis and photocatalytic characterization of porous and antibacterial sol-gel layers. Durán is the first Spanish researcher to receive the Otto Schott Research Award.

The second award winner, Professor Daniel Neuville, is highly regarded and recognized internationally for using various types of spectroscopy to develop new structural concepts for glass-like inorganic materials, especially at the interface between geomaterials, physics, and chemistry. He has been a pioneer in bridging the gap between macroscopic properties (thermodynamics, physical properties) and structure or dynamics at the atomic or molecular level.

The Otto Schott Research Award was first presented in 1991 and recognizes outstanding scientific achievements in fundamental research and technology development of special materials, components, and systems for applications like optics and electronics, solar power, health, and living. It is also intented to encourage support for collaboration between science and industry. The Stifterverband für die Deutsche Wissenschaft manages the Ernst Abbe Fund, which is responsible for funding the prize. The previous winners of the Otto Schott Research Award include physicians and chemists from the United States, Russia, Japan, China, Germany, and other European countries.

Otto Schott is considered the inventor of modern glass technology. Borosilicate glass, one of his many inventions, has changed the world. Unlike any other invention, these products have influenced and, in some cases, even enabled the development of optics, the large-scale chemical industry, and people's everyday lives all over the world.

These attributes characterize SCHOTT as a manufacturer of high-tech materials based on specialty glass. Founder Otto Schott is considered its inventor and became the pioneer of an entire industry.Always opening up new markets and applications with a pioneering spirit and passion – this is what has driven the #glasslovers at SCHOTT for more than 130 years. Represented in 34 countries, the company is a highly skilled partner for high-tech industries: Healthcare, Home Appliances & Living, Consumer Electronics, Semiconductors & Datacom, Optics, Industry & Energy, Automotive, Astronomy & Aerospace. In the fiscal year 2021, its 17,300 employees generated sales of 2.5 billion euros. SCHOTT AG is owned by the Carl Zeiss Foundation, one of the oldest foundations in Germany. It uses the Group's dividends to promote science. As a foundation company, SCHOTT has anchored responsibility for employees, society and the environment deeply in its DNA. The goal is to become a climate-neutral company by 2030.

Webinar IR temperature measurement in glass tempering process
How can infrared temperature measurement help your company to improve quality and process controls the glass tempering process?
Register Now for Networking Events During FGIA 2022 Hybrid Fall Conference
The conference will be September 25-28 at the Fairmont Chicago, Millennium Park, in Chicago, IL.
Register now and join the discussion: Online information series TechnologieForumZukunft "Surface Quality"
On 29 September 2022, we will continue our interactive online information series "TechnologieForumZukunft" with the topic "Surface quality".
LiteSentry and SOFTSOLUTION Glasstec Preview
Where ultimate inspection technology is born - LiteSentry and SOFTSOLUTION are ONE company
Glasstec 2022 | Glaston is shaping the sustainable future of glass
Below are just some of Glaston's latest developments that will be showcased to the participants at this year’s glasstec 2022.
FGIA Presents Fenestration Education at the GlassBuild Main Stage
Don't miss these education sessions, relevant for the residential window and door industry, from the Fenestration & Glazing Industry Alliance (FGIA). All sessions take place at the GlassBuild Main Stage.