The key themes at BAU 2021: Resources and recycling 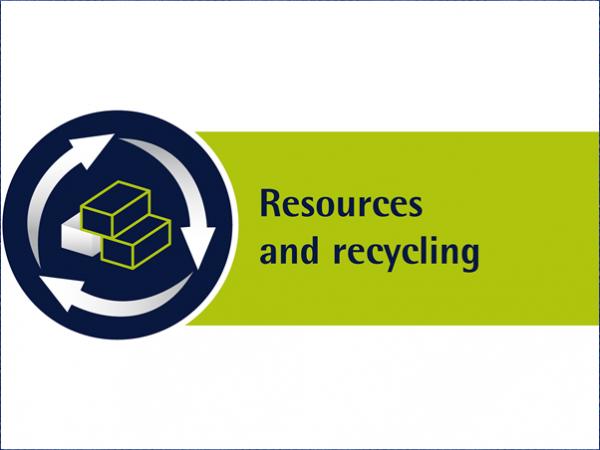 Setting the pace and giving structure to the wide range of products and services on show—the four key themes chosen for BAU 2021.

Many exhibitors will align their presentations with these themes and showcase the solutions that they are offering. In the forums in the supporting program, the key themes will be explored and discussed from a range of different aspects. And in the special shows they will be illustrated using examples of products and projects. Here we present the second of those key themes: Resources and recycling.

Walls made of building rubble, insulation from old trouser material and screw connections instead of welded seams: the “closed-cycle economy” has arrived on building sites, and the sector is taking up the idea of recycling and re-using. Pilot projects and research initiatives are showing the many ways in which recycling can be implemented in building: façade materials, windows, wall and floor coverings and cables—all of them can be fitted in such a way that they can subsequently be completely removed and made available for re-use or recycling. Recovered metals, concrete, bricks, plaster and even clay can now be made into new building materials.

What is “urban mining” exactly? We are familiar with “recycling”, but its meaning has now been expanded: Today, in building, recycling is not just about simple processes such as sorting building rubble for re-use as bulk material in road-building. The use of brick chippings as a substrate for vegetation in gardening, landscaping or the construction of sports grounds is also more about “downcycling”, i.e. recycling but with a loss of quality.

However, if the quality of the material recovered is maintained or even improved, then “recycling” becomes “upcycling” and buildings effectively become a warehouse of raw materials for use tomorrow. Buildings that need to be demolished are regarded differently: not as troublesome waste, but as a valuable store of resources. Town planners call this “urban mining”. An impressive demonstration of this in practice can be seen in Dübendorf, near Zurich. All the building materials used in the construction of the UMAR (Urban Mining and Recycling Unit) residential module, designed by Werner Sobek in collaboration with Dirk Hebel and Felix Heisel, are 100 percent re-usable. In fact, many parts came from demolished buildings. What is particularly important in this module, as regards re-usability, is that the materials are not fixed permanently together—instead the connecting points are screw- or push-fit, or they are pinned. Which means that when the time comes for this module to be dismantled, it will be much easier to separate and re-use the various materials.

In renovation & modernization, too, building materials can be recovered and redeployed in a closed cycle process. This was demonstrated by British architect David Chipperfield in his design for the reconstruction of the Neues Museum in Berlin. He had 350,000 bricks restored and re-used in this project. This historic building material was given a new use, integrated into one of the exhibition halls as exposed brickwork. Bricks and roof tiles are generally well suited for recovery and re-use. In renovation & modernization projects their patina and particular aesthetic are appreciated as a bridge between “old” and “new”. The first “European Technical Approval” has now been granted for re-used wall bricks.

Concrete, too, can be re-used in a cost-effective way and thereby also play its part in the closed-cycle economy. There are already many examples of completed projects in which recycled concrete is replacing conventional concrete by up to 45 percent, as per the current guidelines. Research projects are identifying yet more potential here—up to 100 percent use of recycled concrete. The trend is very much towards recycling valuable building materials, keeping transport distances short and reducing the amount of waste that goes to landfill.

Here are just two examples of the use of recycled concrete: The first, in the town of Korbach in Hessen, Germany, the planning bureau agn selectively dismantled a 1970s extension to the town hall, right back to the skeleton frame. Actually on site the recovered materials were separated into their different categories: concrete, bricks, tiles, ceramics. In a regional recycling company, the recovered concrete was further reduced in size and sieved, so that it could finally be mixed with cement and water to create new concrete for building the new part of the town hall extension.

The second example, a model project involving the University of Munich, goes one step further: The buildings on a large, former barracks area are being demolished to create space for a new residential district, a process that will generate 300,000 tons of recovered concrete, tiles and mortar. This material is to be processed on site for re-use in producing recycled concrete. In this instance, the plan is to use 100 percent recycled concrete—a truly pioneering and progressive example of the closed cycle economy.

A major challenge in the efficient re-use of building rubble is posed by the very small particles, i.e. less than 2 mm in size, that are contained within it. These typically derive from sand-lime bricks, concrete, bricks and plaster. But here, too, there are solutions: In the “BauCycle” project, researchers at various Fraunhofer Institutes have investigated ways of using the finest mineral-based particles from demolition sites and have developed an optical-pneumatic technique for sorting them. This enables the recovery of fine-grained secondary raw materials for re-use in high quality applications.

Recycling demands a re-think by all those involved in building

In view of dwindling resources worldwide (e.g. sand) and the limited capacities of landfill sites for building rubble, it is clear that closed-cycle processes are also cost-effective for the building sector. New approaches, such as the “material passport”, which documents the materials used in a building, and puts a value on their re-use, will in future open up new opportunities, even for the financing of building projects. In addition to this, if recovered building materials are then also re-used locally, or regionally, this can considerably reduce the high energy consumption for extraction, production and transport to the building site.

A re-think is called for. Manufacturers, architects and engineers, as well as building companies and the building trades, will need to develop and implement new, resource-saving solutions. It is not always easy, but initial recycling projects are pointing out that there are big opportunities and significant competitive advantages for everybody involved in the building process.

600450
bau-muenchen.com
The key themes at BAU 2021: Resources and recycling glassonweb.com

Glaston closes EUR 31 million deal for multiple insulating glass lines
Glaston has received a strategically significant order from a glass processor in Europe, valued at approximately EUR 31 million.
Vetropack contracts HORN for furnace repair
Furnace 52 at the Moravia plant in the Czech Republic will be repaired in 2023. Furnace specialist HORN Glass Industries AG has now received the order for this.
Statement of postponing China Glass Exhibition to 2023
The organizer has made the following decision: The 32nd China International Glass Industrial Technical Exhibition will be postponed to 2023.
Guardian Glass focuses on service innovations at Glasstec 2022
Guardian Glass is set to showcase a clear customer service focus at glasstec 2022 (Hall 10, stand A38).
GlassBuild America Announced as Trade Show Executive’s 2021 Gold 100 Honoree
Honoree list recognizes the top executives and their trade shows that set the gold standard in a tumultuous 2021
Training at HORN begins with parents' information evening
Every year, HORN Glass Industries AG organizes a meeting of the new trainees from September of the respective year together with their parents.