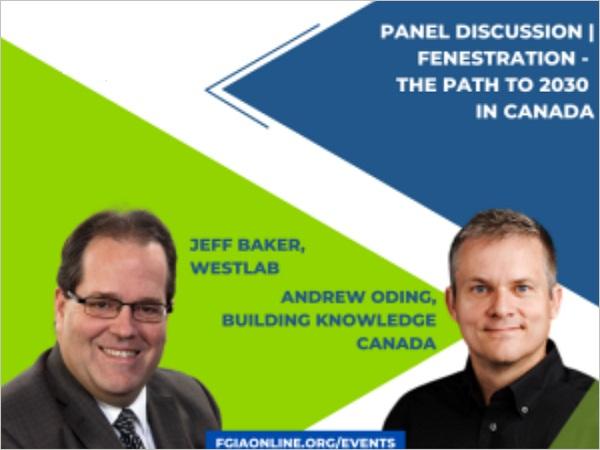 Participants at the 2022 Fenestration and Glazing Industry Alliance (FGIA) Virtual Summer Conference heard from Andrew Oding, Vice President and Director of Building Science of Building Knowledge Canada and Jeff Baker, President of WESTLab Canada, about Canada’s efforts to achieve their energy efficiency goals by 2030. The two spoke on a panel called "Fenestration - The Path to 2030 in Canada,” moderated by FGIA Director of Canadian and Technical Glass Operations, Amy Roberts.

The 2022 publication of Canada’s 2020 National Building Code (NBC) tiered energy code highlights a future of “Net Zero Ready”-type homes and buildings as it relates to higher standards of energy efficiency. Oding and Baker sought to clarify what new codes and a Net Zero future could mean for glazing and window products.

A New Code for Canada

The two panelists provided a brief history of the evolution of window energy performance from 2004 to 2022. Then, the pair shared results of a recent NRCan research project investigating current window designs, including how they are already achieving the 2030 aspirational goal and what design elements are needed to achieve different performance levels on the path to 2030. “The NBC was published in 2022 and there are plans to harmonize [the new 2020 codes] within 18-22 months, putting us somewhere in 2024,” said Oding. “It will take jurisdictions and designers some time to get used to this.”

Oding said he wanted to not just address challenges, but also opportunities. That said, he made it clear he was talking in terms of strictly energy-reduction, not carbon. “Decarbonizing discussions are just now getting underway,” he said. Oding credited the U.S. for pioneering in some areas, including the fact that 27 states require blower door testing prior to occupancy. “The U.S. residential energy code adoption has been rapid,” Oding said. “It's not just a Canadian thing. If anything, we are playing catchup.”

Windows and Energy Use

Windows must have a fairly good U-Value, said Oding, but noted that, as codes move forward, a risk zone is entered. “We start to risk comfort, wetting and/or indoor air quality risks when advanced enclosures are more airtight,” he said.

Baker pointed out that, out of everything else, windows are the most impactful materials in a two-story townhome interior unit when it comes to embodied carbon.

The Impact of Using More Glazing

Today’s homes have lots of glass, Oding said, and cooling loads today are driven by glass. “Because of climate change and more, we are starting to see we may need a backstop on solar heat gain,” he said. “Changing a little solar heat gain can allow for homes to have smaller air conditioning systems, leading to energy savings for homeowners.”

Oding recommended windows keep the relative humidity at about 35-45 percent in the winter and 45-50 percent in summer. Otherwise, homeowners can get dehydrated within hours, he said.

A Window into the Future

“The day will come in five to ten years where the metric for homes will no longer be energy efficiency,” said Oding. “It will be carbon emissions reduction.”

Baker agreed, adding that how each product is selected is going to become more and more important when it comes to solar heat gain, plus including multiple low-E coatings or low-E coatings on all three panes will also be beneficial. “A trend we are seeing in triples is center-of-glass coating for triple glazed glass units with argon fill,” saying that those who are not yet making triples might consider doing so.

When it comes to frames, there is work to be done in the future, according to Baker. “Some are trying to come up with better frame designs,” he said. “But if you are going to redesign a frame in the next few years, make sure it is scalable for the future.”