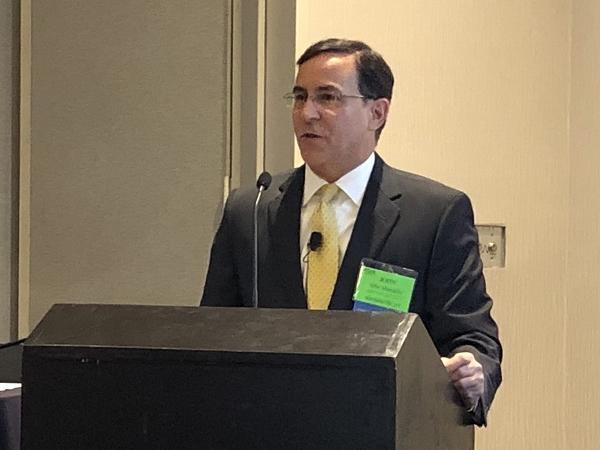 “I've always been a big advocate of trade, and the U.S. is one of the biggest beneficiaries of globalization,” said Manzella.

Manzella reported that markets outside the U.S. and Canada represent 80 percent of the world's purchasing power and 95 percent of its consumers. Trade supports one in five U.S. jobs and increased household income by more than $18,000 per 2016 data, he said.

“Nearly half our exports are sold to our free trade agreement partners but that is only 6 percent of the population,” he said. “The key is to knock down barriers with other countries and level the playing field.”

Manzella brought up the Trans-Pacific Partnership (TPP), which he said would have helped the U.S. to rewrite the rules of trade with Asia.

“But because we are not a member of the TPP, we are losing out to countries that are,” he said.

Next, Manzella discussed the USMCA.

“North American trade, with Mexico, Canada and the U.S. working together, has helped us with China,” he said. “We combined our resources, enhancing our strength.”

Still, there are other things to consider with USMCA, he said.

“When [Americans] buy a good from Mexico, 40 percent of that content was from the U.S. and was shipped to Mexico,” Manzella said. “Does that mean the U.S. should take the deficit and knock off 40 percent? The deficit numbers don't reflect reality.”

He said USMCA encourages U.S. companies to invest more in other U.S. companies, and less so with Mexican and Canadian companies. However, U.S. companies investing abroad have a very positive impact on the U.S. in general, he added.

“In many cases, they do better in the long run,” said Manzella of such companies.

On the labor front, Manzella encouraged conference participants to not fear automation.

“It scares people quite a bit, because 50 percent of jobs are likely to be automated in the next 20 years,” he said. “But in the long run, automation creates more jobs down the road.”

For more information about FGIA and its activities, visit fgiaonline.org.

Your trusted industry resource, setting the standards for fenestration and glazing.

Greenbuild Information: New for 2020!
Greenbuild International Conference & Expo is moving its 2020 event to an all-virtual format.
FEN-TECH implements FeneVision ERP software
A production solution for highly-customized manufacturing
FGIA Virtual Conference panels to focus on financial aid, recovery in wake of COVID-19
FGIA will be hosting a series of panels pertaining to lessons learned for manufacturing operations during COVID-19, as well as an economic outlook and financial relief programs for the U.S. and Canada.
New technical document from Vitro Architectural Glass addresses safety, cleaning and decontamination of glass surfaces
Document provides health, safety and cleaning information for architects, specifiers, designers and fabricators.
The key themes at BAU 2021: Resources and recycling
Setting the pace and giving structure to the wide range of products and services on show—the four key themes chosen for BAU 2021.
Webinar: Understanding Window, Door And Skylight Certification
The Understanding Window, Door & Skylight Certification webinar is designed to help architects and remodelers understand the benefits of window, door and skylight certification, and how certified products can enhance their projects.

The Advantages of Digitalization in the Glass Industry