Towers of strength: windproof doors for Flame Towers in Baku 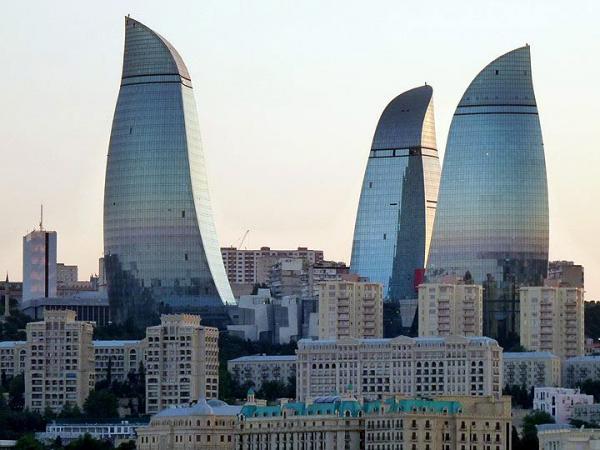 Our job was to install a building maintenance unit at 170 metres height to gain access to the building envelope.

Ever opened a simple casement window at a height of 170 metres? Okay, we admit the question was a rhetorical one. If you’d said yes, you’d probably wouldn’t be alive to tell the tale.

The wind force would almost certainly have taken you and the window with it. Especially in the Azerbaijani capital of Baku, also known as the City of Winds. This is where three so-called Flame Towers up to 190 metres in height shoot up into the stormy skies.

Our job was to install a building maintenance unit at 170 metres height to gain access to the building envelope. The concept involved enabling the facade around the building to open as discretely as possible. And each door leaf needed to withstand the enormous wind force of up to 7.5 kN (normal levels are 1.5 kN).

Other challenges involved the sheer size and weight of the door leaves – whichs were as vast as garage doors and double-glazed too – as well as an inclination of 30° due to the special shape of the towers.

Based on these parameters, our job was to develop a workable concept for the folding sliding doors, the drive mechanism and the static sizing.

First of all we created 3D CAD models to analyse the geometric conditions and to draw various solutions. The models helped the facade builder Dekoral to make a full-size functional model. Extensive static calculations provided the figures to plan the rest of the construction project.

In the end, around 120 units in different shapes and weights of up to 1.2 tonnes were mounted to make the 64,000 sq m facade of the three Flame Towers accessible from the outside at all times. A welcome bonus: by switching the electric drives to hydraulic ones, we halved the running costs.

Ever opened a Priedemann folding sliding door at a height of 170 metres? Go ahead!

Webinar IR temperature measurement in glass tempering process
How can infrared temperature measurement help your company to improve quality and process controls the glass tempering process?
Register now and join the discussion: Online information series TechnologieForumZukunft "Surface Quality"
On 29 September 2022, we will continue our interactive online information series "TechnologieForumZukunft" with the topic "Surface quality".
LiteSentry and SOFTSOLUTION Glasstec Preview
Where ultimate inspection technology is born - LiteSentry and SOFTSOLUTION are ONE company
Glasstec 2022 | Glaston is shaping the sustainable future of glass
Below are just some of Glaston's latest developments that will be showcased to the participants at this year’s glasstec 2022.
Kuraray supports a German nationwide 100ProLesen concept”
Kuraray supports the objective of "100ProLesen" to strengthen and promote individual reading and learning skills.
A+W at Glasstec 2022
Scan barcodes with a smartphone – completely automated production with A+W SmartFactory