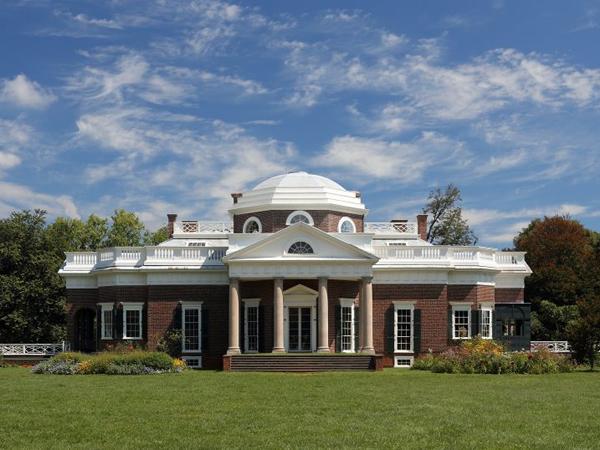 Monticello is Thomas Jefferson’s estate, preserved now as a UNESCO World Heritage Site, it serves as a museum, place of study and research, and a historical site.

As part of an ongoing project to renovate and transform this historical site, Gensler architects have been working to update the 1950s era Griggs Building. As the home of the Thomas Jefferson Foundation Executive Offices, Rachel Himes and her team sought to create a modern day workspace that offered functionality without sacrificing the antiquity and historical integrity of the location.

As part of the renovations, designs called for a more open interior that might facilitate conversation, learning, and interaction between foundation staff. Previously, the building had been composed of closed off offices and pathways, claustrophobic workspaces, and isolated personal areas.

Portella’s steel frame windows and doors offered an excellent opportunity to provide a feeling of openness by furnishing the interior with clean-lined glass walls and doors. With the emphasis on glass, the design team was able to preserve some of the necessary privacy of office space while expanding the feeling of openness.

When designing for such a prestigious project, architects must always be mindful of the delicate balance between accuracy, functionality, and literal structural integrity. Given the significance places on each of these elements, Himes reported working closely not only with her team, but also the Jefferson Foundation’s president, historian, and extended team to ensure the preservation of the historical character of such a prominent piece of architecture.

Designing for Past and Future

From using the right materials, to meticulously weighing changes to design against a traditional outline or build, working on historical projects is a bit tricky. Architects are forced to juggle the expectations implied by history or directly set by the foundations operating and commissioning the renovation while also looking for opportunities to improve and reimagine a project.

In some cases it’s as simple as incorporating bits and pieces of detail that hint at the history of a place. As Himes noted, the new tabletop of the main conference room was taken from a fallen, historic tulip poplar on the Monticello grounds, speaking to the deeply ingrained history and tradition of the place. As a functional centerpiece, it serves as an additional reminder of the age and magnitude of the grounds.

Other times, it’s a bit more complicated. For example, when traditional building methods and materials are unavailable or unsafe for one reason or another, it’s important to consider the overall integrity of the project. Designers can either look for near-equivalents, essentially modern day building materials or design techniques that will work towards keeping a project as close to the original as possible. Or they can go for something that employs modern materials and techniques as a departure from history. While one preserves history in a more literal sense, the other offers an opportunity to express progress through architecture.

For both options, the key aspect of renovation and preservation is to do justice to the legacy of the thing, or in this case the estate. Architecture offers an amazing insight not only into the physical world of our past, but the intellectual and personal lives of the people that once inhabited these structures. For the Monticello project, the combination of historical preservation and modern work speaks to the goals of the foundation operating the site.

The main mission of Monticello is to promote conversation about the history and context of both the home and the people that lived there. The project serves as more than a mere marker of where we’ve been, instead serving as guidepost in history. It speaks to where we’ve been, and gives context to where we’re going.

The need for flat glass recycling at the NGA Glass Conference - Glass for Europe
European flat glass manufacturers promotes the dismantling, collection and recycling of end-of-life building glass (from windows, glazing and other products) to ensure that end-of-life flat glass does not end up in landfill.
Facade Tectonics Institute Recognizes Industry Leaders with the Vitruvian Honors & Awards
In this first 2022 issue of SKINS, we pause to look back on 2021 through our most-read stories of the year, which we’ve recycled here in case you missed them (more original content coming in 2022!).
Get Ready for the 24th Annual BEC Conference!
24 years of tradition begins again this March. Head to Nashville to join hundreds of glazing contractors, fabricators and suppliers for education, tabletop displays and plenty of networking.
Panels, Roundtable, Interactive Workshops to Cover Range of Topics at FGIA Hybrid Annual Conference
The Fenestration and Glazing Industry Alliance (FGIA) has released a final schedule for the upcoming 2022 FGIA Hybrid Annual Conference.
Dow to Introduce carbon neutral silicones
Dow to introduce the world’s first commercially available program for carbon-neutral silicones in building façades.
Inside A+W
Become more successful with our customers