Mental Health Panel at GlassBuild: How Can We Save Lives? 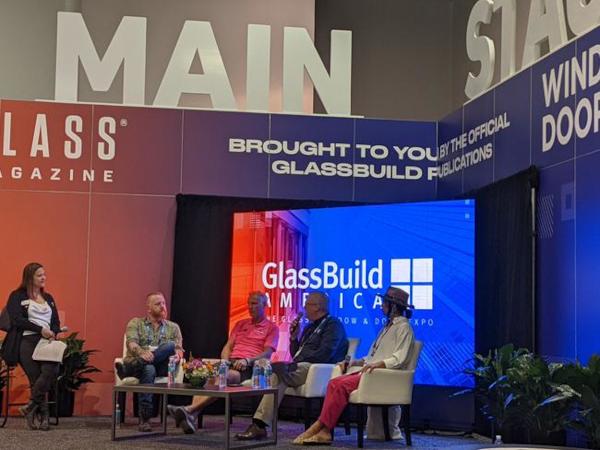 Talk to Each Other. And Listen.

The National Glass Association hosted a panel discussion, Mental health and Suicide Prevention, during GlassBuild America 2022, to start a conversation within the industry on addressing mental health and suicide prevention. Panelists John Hewitt, “We Mind and Kelly Matters;” Steve Dillon, VEKA North America; Dustin Anderson, The Alone Effect; and Mai Tran from the American Foundation for Suicide Prevention all indicated the importance of breaking the stigma around suicide and mental health. A good first and ongoing step is having conversations.

Emily Thompson, publisher of Glass Magazine and Window + Door magazine, moderated the panel. “How do we save lives?” she asked. “We’re doing it right now,” says Tran. “Having a conversation. Being compassionate and caring about how people are doing. And talking about it.”

Hewitt agrees. “People don’t know how to approach suicide, how to talk about it, and they avoid it.” His organization and the Loneliest Road project work to provide the platform for people to talk about their experiences.

“When people are struggling with their mental health, they’re on the loneliest road,” he says. “There are stretches of road you struggle more and need people. You don’t have to struggle alone.” Hewitt organizes a bike ride on Route 50 through Nevada (and elsewhere internationally). The highway is known as the Loneliest Road in America.

Veka is a sponsor and collaborator with Hewitt’s organization. Dillon shared the goal of 52,000 combined miles logged for the charitable ride. “That’s two times around the globe in miles… A metaphor that it’s ok to ask someone twice if they’re ok.”

Anderson also spoke about the importance of sharing stories and being open to an ongoing conversation about mental health awareness. In the construction industry, specifically, Anderson sees two issues: people that don’t understand the importance and people that act too tough to want to talk. “By telling our stories and allowing others to as well, we make an impact... You don’t have to understand what someone is going through to know they’re going through it. Just listen. But it’s a conversation that needs to happen as often as possible.”

For employers and managers in the industry, Dillon shared that creating an environment that’s open to these conversations is key. “It starts at the top and moves down, passed from manager to manager. Everyone learns how to recognize signs, how to approach employees. Don’t quit. Keep opening up the conversation.”

The AFSP offers support for companies, including Veka, with education programs and resources.

Tran recommends employee assistance programs, addressing the importance of mental health awareness during onboarding and reviews. “Have real conversations. Someone showing that they care and will listen does save lives.”

Hewitt says, “Employers need to be a lot braver, do a lot more to address these issues directly.” He suggests educating yourself and employees how to look for warning signs. “Look out for one another.”

Tran says these signs include specific talk about suicide or harm, behaviors that are concerning or changes in mood.

“There’s no one answer to saving lives,” says Tran. “But talking and asking and caring does have a chance of saving a life.” 600450
www.glassbuildamerica.com
Mental Health Panel at GlassBuild: How Can We Save Lives? glassonweb.com

FIT Show 2023 Registration is LIVE!
Visitors can now register to attend the UK’s number one event for the windows, doors, glass, hardware and components industry via the FIT Show website.
Digitization of the construction industry: Digital transformation takes hold
Experience the construction industry of the future at BAU 2023
The Windoor-tech Fair 2023 is over
Windoor-tech Fair 2023 came to an end after four intense days. Participants, exhibitors, and partners all contributed to making this year's edition a success. A short film summary of the Fair has been released.
Glassman Europe opens this week!
Time is running out to register for Glassman Europe, the must-attend event taking place in Istanbul in just two days!
NGA with GANA | Five Years One Voice
Five years ago, NGA and GANA combined to grow glass industry resources and events.
Vitro Architectural Glass Wins 2022 Design Award for Duquesne University Renovation
The UPMC Cooper Fieldhouse in Pittsburgh, Pa., has recently been recognized for its exceptional design featuring Solarban® R67 Starphire® glass from Vitro.