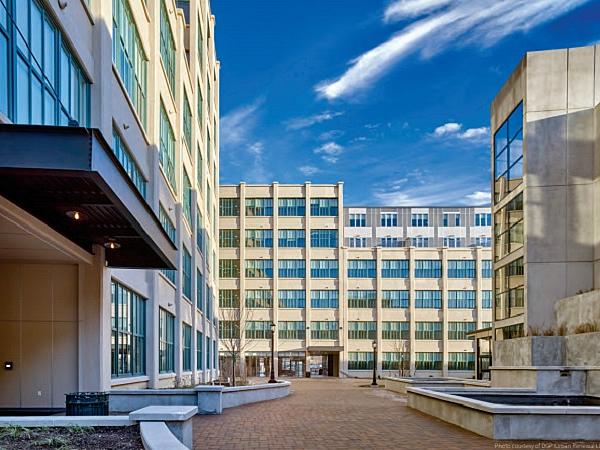 The industrial-to-residential redevelopment of the Thomas Edison Battery Building would require the replacement of nearly 2,500 8- and 10-foot windows.

Graham was well on its way to meeting both the historic criteria and strict thermal performance requirements when, at the eleventh hour, the installer requested a redesign.

HELPING TO POWER A LANDMARK RENOVATION

By the turn of the 21st century, the Thomas Edison Battery Building was the last of the renowned inventor’s factories still standing. But it was clearly on its last legs, abandoned and neglected after nearly 100 years of existence in West Orange, NJ.

By 2001, it was so bad, the building and the 21 acres surrounding it were designated a redevelopment site. The designation generated little interest. In fact, five years passed before Prism Capital Partners unveiled a plan for a mixed-use restoration including retail and residential. West Orange embraced the developers and their vision for “Edison Village.”

Then came the housing crash, followed by the Great Recession, and some legal wrangling. It wasn’t until 2016 that the project finally got underway in earnest. And with nearly 2,500 windows requiring replacement that would meet rigid historic and thermal criteria, finding the right manufacturer was one of Torell’s priorities.

He was coming off a similar project in which the window component was handled in the traditional way. As he explains, “We awarded the windows to an installer and after that it was determined which manufacturer they’d use.” Torell was working with another project manager on that project and didn’t purchase the windows. But, he says, “There were issues with the window, and I ended up having to kind of clean it up. I decided the next time, we were going to do the process a little differently.”

That “next time” was Edison’s Battery Building and its conversion into The Residences at Edison Lofts. Torell went to the window manufacturers first.

“Early on in the process,” he says, “I took a ride out to York (PA – Graham Architectural Products’ headquarters), met the people and had a tour. Everyone was excited. And I just knew in the back of my mind, these are the guys. They want to do the job. They care about it.”

The job wasn’t easy. The openings were up to 10 feet tall. Matching the sightlines and satisfying historic reviews while delivering thermal performance was a challenge.

According to Dennis Kelly, Graham’s executive vice president, Graham delivered “an extensively modified 6800, mostly through dies and tooling, primarily for aesthetic purposes. We have lighter systems that would have given them the same look, but we just couldn’t build them that big. The 6800 is our massive projected window series, so we had to stay within that series for its structural performance, but we really had to make it look like a lighter gauge.”

Nick Irwin, Graham’s sales rep, says, “The grid on this particular job was a very deep grid, so we had to modify the glazing depth to fit the glass and the grid into the pocket, which was somewhat challenging. And the muntin configuration – that was a whole new die itself, because that had a lot of articulation to it.

That attitude would eventually face a tougher test.

Bill Wilder, Graham’s director of technical sales, picks up the story. “We had this all figured out: It was one window, with a fixed lite above and an awning below, with a separator bar running across.

“It’s like the 11th hour. The installer was getting ready to place the order. We already had the contract in. The price was settled. Then the installer came to us and said he can’t install these all in one unit.

“The windows were all, like, 8-, 9- and 10-feet tall. He says, ‘I can’t install them like that. Can you make them a stacked unit?’ He wanted two windows that could be field-stacked – put the lower one in, and then put the top one in, stacked out in the field. Otherwise, they would have had to hoist them up on the outside. Because in some of the areas of the building, they were having interior walls put up, so it wouldn’t be easy to maneuver a 4-foot by 10-foot window around – especially one that weighs 300 pounds.”

Graham’s manufacturing and design people immediately went to work. They found ways to make the manufacturing more efficient, so they could save time without passing along additional costs.

“We basically changed the way the window was manufactured and assembled,” Wilder says. “We found ways to simplify the assembly process. And it probably ended up better for our people as well. They weren’t handling a 300-pound window – they were handling two 150-pound windows, which is a lot easier to handle.”

The final product pleased everyone. In fact, according to local news source TAP into West Orange, West Orange Historic Preservation Commission (WOHPC) member Marty Feitlowitz “complimented Prism officials for working closely with WOHPC on making sure the Edison factory’s windows comported as closely as possible with the original ones.”

Torell is pleased too. “My impression of Graham? Very favorable. Great team player. Easy to work with. They had no problem doing any color we wanted, doing custom extrusions. You name it, it was pretty much whatever we needed.”

The large glass that covers the €1 billion R&D Centre
Tvitec’s large-scale solutions light up AstraZeneca’s magnificent Discovery Centre designed by Herzog & de Meuron.
Change of date: Fensterbau Frontale and Holz-Handwerk 2022 to be held in July
The trade show pairing of FENSTERBAU FRONTALE and HOLZ-HANDWERK 2022 has been rescheduled in close consultation with exhibitors.
AB-AR & Evalam Visual, perfect combination for the CECONEXPO, Mexico
AB-AR and EVALAM VISUAL play a decisive role on the façades of this new business case with 7,300 square meters of laminated glass.
Şişecam is preferred for the office building: The Ilbank Atasehir Tower
Europe's largest flat glass producer Şişecam’s products were preferred in the The Ilbank Atasehir Tower project in Istanbul.
Eastman customers earn The Architect’s Newspaper 2021 design awards
Saflex® and Vanceva® PVB interlayers featured in facade projects.
Mappi at Glass Expo Southeast
From Milan to Florida, attention to the environment is growing, and Mappi is always on the front line.