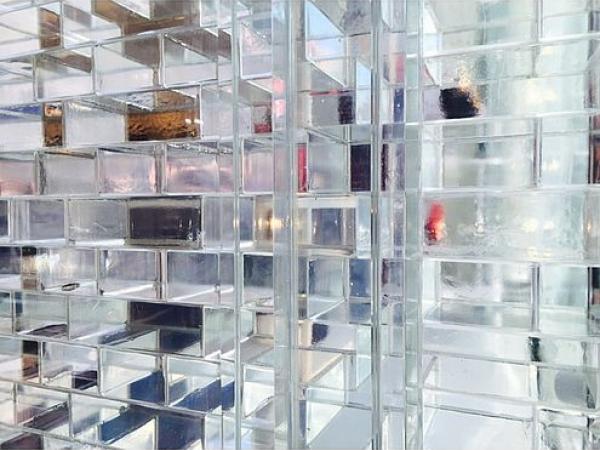 A wall of glued glass bricks that is ten times as strong as a regular brick facade. Experiments conducted by the Glass & Transparency research group proved this could be true. Their test results are being used to make Chanel’s historic storefront at the P.C.

Hooftstraat transparent. ‘This wall could support a herd of elephants and it can withstand an attack with a sledgehammer.’

According to a design by the architecture firm MVRDV, the ‘Crystal House’ will consist of a facade of transparent ‘bricks’. In terms of appearance this design is almost identical to the nineteenth century brick facade that is being replaced. The big question before the start of the project was how glass blocks would hold themselves up as elements of the facade. “We put a number of test pieces together and subjected them to various tests,” says Rob Nijsse, professor of Structural Design. “The results were beyond our expectations.”

Pressure testing, three-point bending testing and impact testing showed that the minimum compressive strength was as high as 10 N/mm2. This is about ten times stronger than the brick facade that is being replaced, and strong enough to build a robust, monolithic, self-supporting facade. In the Stevin Lab, researchers also looked at whether the structures are resistant to heat shock. The test pieces withstood this test too with flying colours. This is important, as it means that the glass won’t crack during heavy rain after a hot summer day.

To acquire maximum transparency, the researchers chose to work with stone of soda-lime-silica glass. These stones are made from sand with low iron content. The Italian specialist Poesia divisione di Vetreria Resanese produced glass stones in five different sizes especially for the Dutch project. For the bonding of the construction, the research group Delo-Photobond chose UV-curing adhesive. At room temperature, this adhesive cures in a matter of seconds by irradiation with an UV-lamp. It is also colourfast and has a refractive index which is equal to that of the glass used. This ensures minimal visual distortion in the 210 millimeters thick glass wall. Furthermore, the glue contributes to the flexural strength of the brickwork. This requires strict tolerances, as the adhesive obtains maximum strength in a layer of 0.3 mm.

Repair of any possible damage to the exclusive glass facade is possible. “In the laboratory, we succeeded at removing broken glass stone from the facade, cleaning it with a blowtorch and replacing it with a new one,” says Nijsse, who conducted research with Fred Veer (Glass & Transparency Research Group) and PhD students Faidra Oikonomopoulou and Telesilla Bristogianni.

The implementation of the facade in the P.C. Hooftstraat took four people and three months of work. It made the facade pricey, also because of the price of the glass stones at fifty euros a piece. Still, there is great interest worldwide for the innovation that was devised in the Delft laboratory. Future user Chanel opens its exclusive new store in June, with an interior design adapted to the facade.

Guardian Glass Project: Mærsk Tower
The glass in the unitised façade system is Guardian ClimaGuard® Premium2, coated thermal insulation glass that optimises comfort and wellbeing of the building’s occupants.
sedak isosecure receives award
Insulating glass in all bullet-resistance classes "A+Awards Special Mention 2020" for sedak isosecure.
Advancements in Structural Glass & Glass Facades | WORKSHOP – SESSION 2A
Do not miss this opportunity! Register for the August 13th Facade Tectonics session (12-2pm) on Advancements in Structural Glass & Glass Facades.
GlassTrend webinars
Since all on-site GlassTrend events in 2020 are cancelled, the GlassTrend Board decided that a series of TEDx-like webinars will be organized during autumn of this year.
A dialogue of history with modernity – the facade of the PURO hotel in Warsaw glazed with Guardian Glass
The use of low-iron UltraClear™ Guardian glass made the project look light and transparent.
Şişecam presents webinar series on Designing for a New World – Post COVID-19 powered by Architect and Interiors India
The fourth episode of the webinar series will see a discussion on the many facets of glass and its use in the architectural and design realm.