Can Your Glass Do This? See How Smart Your Glass Can Be at the New York Auto Show 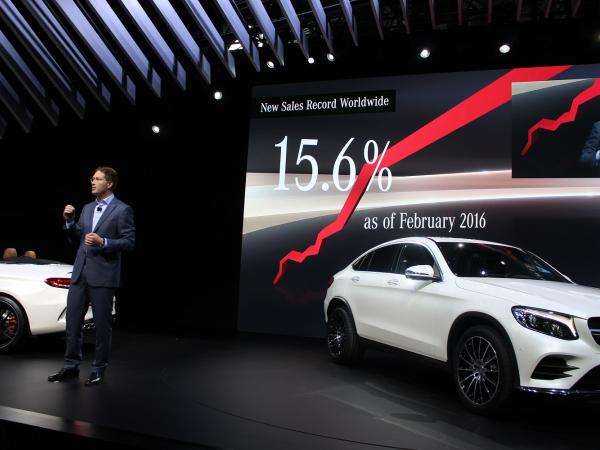 You push a button and your roof glass instantly changes from clear to dark! Magic?

The newest models of the Mercedes-Benz SLC and SL roadsters, and the S-Class Coupe, Maybach and S-Class Sedans all allow you to do this thanks to the MAGIC SKY CONTROL option using SPD-SmartGlass technology from Research Frontiers.

All of these cars will be available in showrooms in the spring of 2016.

Joseph M. Harary, President and CEO of Research Frontiers, the company that invented the SPD-SmartGlass technology used in Daimler's MAGIC SKY CONTROL panoramic roofs, listed some of the benefits of using SPD-SmartGlass. "Imagine you could do one thing to a car that would:

Mr. Harary, who was the keynote speaker at the Automotive Glazing Summit in Stuttgart, Germany earlier this month, noted that SPD-SmartGlass can do all of these things, and that Mercedes-Benz owners and visitors to the New York Auto Show can experience them all first hand.

Please see this video to see SPD-SmartGlass in action in the automotive, aircraft, yacht, museum and architectural industries.

The MAGIC SKY CONTROL feature, using Research Frontiers SPD-SmartGlass technology, was a popular option on the SL and the SLC's predecessor model, the SLK roadster. MAGIC SKY CONTROL was originally introduced on the SLK (now SLC) in 2011 and quickly followed up in early 2012 with the SL and is now also offered on multiple S-Class variants including the S-Class Coupe introduced in 2014, the Maybach introduced in 2015 and the S-Class Sedan (V222) being delivered to dealer showrooms now.

The MAGIC SKY CONTROL feature uses patented SPD-SmartGlass technology developed by Research Frontiers to turn the roof transparent by electrically aligning tiny particles in a thin film within the glass. With the touch of a button, drivers and passengers can instantly change the tint of their roof to help keep out harsh sunlight and heat, and create an open-air feeling even when the sunroof is closed. Glass or plastic using Research Frontiers' patented SPD-SmartGlass technology effectively blocks UV and infrared rays in either mode, helping keep the cabin cooler, and protecting passengers and interiors. These benefits become even more important when a car uses large surface areas of glass, especially in warm climates.

SPD-Smart technology has proven itself in many aspects, from durability and performance, to sales. MAGIC SKY CONTROL is now in use on thousands of SL's, SLK's, Mercedes-Maybach's and S-Class models around the world. Before putting cars into serial production, Mercedes-Benz put the MAGIC SKY CONTROL roof using SPD-SmartGlass technology through rigorous durability and performance testing in some of the most extreme conditions on Earth. This included testing in the arctic cold of Scandinavia (with temperatures below -22ºF/-30ºC) and the blistering desert heat of Death Valley, California (with temperatures exceeding 122ºF/50ºC). MAGIC SKY CONTROL blocks over 99% of harmful UV radiation and substantially reduces heat inside the vehicle. Test data published by Mercedes-Benz shows the ability of the roof to reduce sun exposure to 1/20th of direct exposure levels (from over 1,000 watts/square meter to less than 50 watts/square meter). When compared to conventional automotive glass, Mercedes-Benz reported that the use of SPD-SmartGlass significantly reduces the temperature inside the vehicle by up to 18ºF/10ºC. This increases passenger comfort and reduces air conditioning loads, thereby saving fuel and reducing CO2 emissions. More recently, independent calculations from automotive component supplier Continental Corporation show that use of SPD-SmartGlass can reduce CO2 emissions by four grams per kilometer, and increase the driving range of electric vehicles by approximately 5.5 percent.

Research Frontiers (NASDAQ: REFR) is the developer of SPD-Smart light-control technology which allows users to instantly, precisely and uniformly control the shading of glass or plastic, either manually or automatically. Research Frontiers has built an infrastructure of over 40 licensed companies that collectively are capable of serving the growing global demand for smart glass products in automobiles, homes, buildings, museums, aircraft and boats. For more information, please visit our website at www.SmartGlass.com, and on Facebook, Twitter, LinkedIn and YouTube.

600450
www.smartglass-ir.com
Can Your Glass Do This? See How Smart Your Glass Can Be at the New York Auto Show glassonweb.com

Diamon-Fusion® Protective Coating Glass Benefits
Protect your glass with Diamon-Fusion® coating which is eco-friendly, UV-resistant, and comes with a residential lifetime warranty ensuring the surfaces are protected for years to come.
Early Bird Registration is Still Open for the Facade Tectonics 2022 World Congress!
Register today with our Early Bird pricing to claim your spot amongst the industry’s most influential leaders and academics.
NGA Promotes Weather Safety Awareness
Get NGA downloadable resourses to support the use of glass and glazing materials in buildings.
SOLARBAN® 67 SOLEXIA® Glass at the University of California Project
SOLARBAN® 67 SOLEXIA® Glass Maximizes Daylight for a Southern California Higher Education Mixed Use Facility
Final Schedule, Speakers Announced for 2022 FGIA Virtual Summer Conference
The final schedule has been released for the 2022 Fenestration and Glazing Industry Alliance (FGIA) Virtual Summer Conference, to be held June 6-9.
NGA Glass Conference: Chicago 2022
Registration is NOW open for the NGA Glass Conference: Chicago, taking place July 18-20, 2022, at the Renaissance Chicago North Shore hotel.