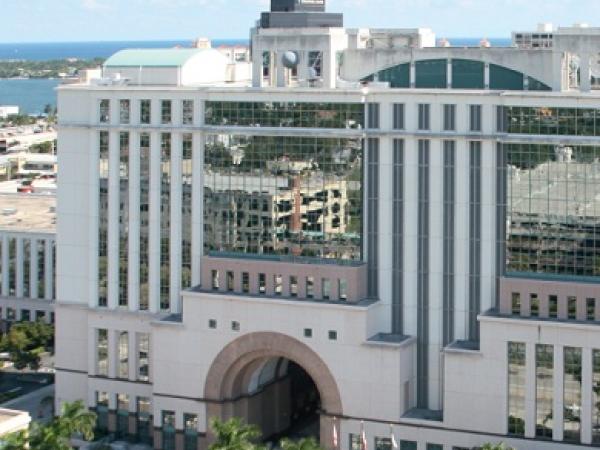 Built in the mid 90s, the imposing 12-storey building – which houses a wide variety of offices, administration centers, chambers and courts – had to be brought up to current building codes following the devastating effects of Hurricane Andrew, one of only three category five hurricanes to hit the United States in the 20th Century.

The building already had a significant façade infrastructure as part of the original build, but after Hurricane Andrew in 1992 building codes in South Florida were significantly revised; demanding even greater protection from high speed winds and the effects of flying debris.

Architect Mark S. Beatty AIA, LEED A.P., who at the time worked for MPA architects, explains the reasoning behind the renovation: "The building was built just before Hurricane Andrew with insulating glazing in the façade. Following Andrew in 1992, Frances and Jannie in 2004 and Wilma in 2005, FEMA money became available and, coupled to a matching grant, the finances were in place to make it not only hurricane hardened but also to solve a water infiltration issue it was facing.

"We were extremely fortunate in that after some initial meetings spent poring over the original architect's drawings and running preliminary engineering calculations, we discovered that the existing façade frames had the potential to meet the revised codes – all we had to do was replace the glass panels," Beatty explains. "Based on the initial findings, we went forward and contracted with the Weitz company to reconstruct and test a modified mock up of the building's glazing and framing facade in a hurricane testing lab. It successfully passed the tests – including the county's high-velocity wind zone requirements – with only minor modifications to the beading. We then went forward and prepared a design based on new large-missile-impact glass panels comprising Viracon’s VP reflective coating on the #2 surface of the insulating glass unit and 14.29 mm (9/16in) laminated with 2.28 mm (90-mil) SentryGlas® interlayer on the inboard.

"The original glass façade panels were not designed to be impact resistant," he elaborates, "they were insulated doublepaned glass, so we needed a tougher replacement. As well as the impact performance however, we were also concerned that we were going to change environmental dynamics of the façade, which had originally been designed for a certain solar performance. The new system had to offer the same or better performance, or the building might not be able to cool itself. During the testing phase we ran a number of energy models to ensure that we could address the environmental issues. As it turns out, the new panels with the SentryGlas® interlayer actually offered better thermal performance after the application of a film coating that was as close to the original that we could find. The new coating, which, like the old coating, is reflective so you can't see inside the offices on outside walls, also contributed to the better thermal performance and retained the visual security for the occupants inside.

"I know that SentryGlas® is stronger than PVB," Beatty concludes, "and this gives us a lot of freedom as architects when it comes to structural design. In addition, one of the big issues we have from an aesthetic standpoint is clouding and delamination; something else that SentryGlas® resists far better than other industry alternatives."

The glass fabricator for the courthouse, Viracon, undertakes jobs like this and deploys SentryGlas® in a number of applications. According to Kevin Anez, director of marketing at Viracon: "We have the capability to design and develop glass solutions with SentryGlas® interlayers and ultimately the decision to use SentryGlas® is determined by how well the product meets both aesthetic and performance requirements.

"In this project Harmon Inc. validated the specified interlayer," he adds, "by using a test laboratory to conduct a large-missile test; and Harmon's subsequent Notices of Acceptance (NOA) determined that the SentryGlas® interlayer would meet the performance requirements as specified by the architect. Building codes continue to become more stringent. Therefore, we continue to focus on developing new products that meet the requirements of our customers both from an aesthetic and a performance perspective.

"We have a good working relationship with DuPont," he continues, "and we collaborate on projects when necessary. The SentryGlas® interlayer has good structural integrity and performs well in a large-missile test, so in certain applications customers are specifying SentryGlas® for buildings that could be exposed to higher-wind-load conditions or higher threat levels such as flying debris from a hurricane." 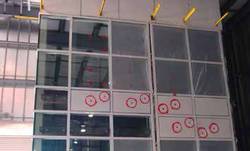 The SentryGlas® interlayer was validated using a test laboratory to conduct a large-missile test. The subsequent Notices of Acceptance (NOA) determined that the SentryGlas®interlayer would meet the performance requirements as specified by the architect.
Photo: Viracron 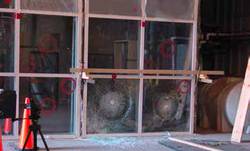 Trevor Barrett, General Manager, Harmon, Inc. South Florida, who installed the façade, adds his thoughts: "The only modifications we needed to make were for the glazing adapters, in order to get more 'bite' on the glass, we didn't have to undertake any reconfiguration of the vertical mullion supports. "At the end of the day," he continues, "we knew that by using DuPont™ SentryGlas® we had installed a premium product in this application, one that will perform for many years; it was completely dominant in the testing and there were certainly no after thoughts about not using it.

"SentryGlas® is one of the strongest interlayers available," Barrett concludes, "and coupled to its resistance to water ingress and delamination it is certainly an ideal product for demanding exterior applications. I deal with DuPont on weekly basis, discussing code changes and performance criteria and what the company really delivers on top of its industry leading products is real in-depth knowledge and support."

Experimental Study on Thermoplastic Interlayers in Laminated Glass Using Fiber Optic Strain Sensors
The study describes the results of the principal applicability of fiber optic strain sensors to evaluate the structural behaviour of laminated glass and provides the basis to define a model for the material characteristics of viscoelastic interlayers.
Devil's Detail: Bent Glass
From domed skylights to curved handrails, revolving door enclosures to building enclosures, the dramatic curves of bent glass offer architectural form and function.
#AskGlaston Episode 58: Why is SentryGlass more difficult to laminate than normal PVB?
That’s an excellent question! It really is true that SentryGlass is more difficult to laminate in many aspects than standard PVB. But if we first think of what SentryGlass has been designed for, it is to give structural strength to the laminate.
Structural Glass in Building Restoration. Europe’s Tower Entrance Hall. Madrid. Spain
The refurbishment of Hall access involves the complete demolition of existing access for the construction of a new lobby with greater transparency. To get this new image, the architect choose a solution in structural glass, without other structure.
Structural Glass Connections
In the last decade there has been a trend in Architecture to design façades in which all structural elements are made of glass. This trend has also extended to other parts of the building such as rooflights, staircases, etc.
Transparent Visions | glasstec
This year the special show will address the four focal themes Interactive Façades/Display Glass, Energy and Performance, Structural Glass and New Technologies.