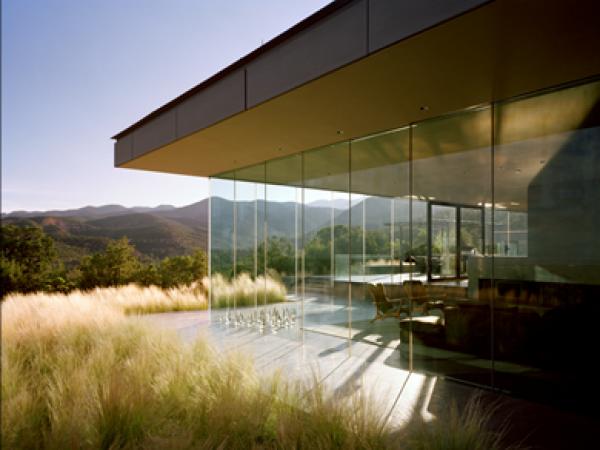 The canopies are a composite construction between both steel and glass, leaving no element without stress or structural function.

The steel without the glass would have little lateral stability, and would not survive a wind storm. The overhead glazing was developed into a 30m long lateral beam using a series of unique but simple point fitting connectors. A glass "knee" structurally connected the two halves of the pier. A number of special technical problems were required to be resolved because of the rigid attachment of steel to glass, including the relative thermal movement of the dissimilar materials. Designed in collaboration with Diller Scofidio & Renfro Architects, the structure is an architectural feature of the Lincoln Center development.

The overhead glazing provided lateral strength for the structure, and the two halves of the pier were held together with a glass knee.

Precedent structures leading up to the development of this canopy were the Brooklyn Academy of Music Canopy and the Klein house. The glass forms the tension element in a derrick crane type structure, and was completed in 2007. The Klein house features glass walls that hold up the roof. Both of these projects included glass supporting steel, provided valuable lessons for the design of the Lincoln Center canopies.

Figure: Brooklyn Academy of Music Canopy. Overhead glazing is in tension to hold up the steel frame.

The canopy beams were cantilevered from the piers by 11.6m with a backspan of14.0m, and laterally braced by the overhead glazing. The pier was split into two halves, with each half working compositely with the other because of the connection through the glass knees.

Figure: Glass knee holds two halves of the pier together

The bridge has a large flat surface which can twist. When it twists, it picks up more wind load, and then elastically moves to the opposite twisted position. This combines with some vortex shedding and other asymmetric wind loads to form the potential for aerodynamic instalbility.

This aeroelastic concern was addressed in a number of ways. Firstly the mass and stiffness of the structure were tuned to ensure the first natural mode of vibration exceeded 2.5Hz.

The coefficient of thermal expansion of steel is 12 μϵ /oC, whereas the coefficient of thermal expansion of glass is 8 μϵ /oC. Additionally, glass’s transparency combined with steel’s opacity mean that the two materials absorb different amounts of solar radiation, leading to there being a difference in thermal movements between glass and steel. Glass is a brittle material, so no local yielding could be counted on, yet the glass was expected to work compositely with the steel.

A number of options were studied to address this concern. They could be broken down into the following basic approaches:

Ultimately the semi-rigid joints model was determined to be the most practical. Drilled point fittings were installed between the steel and the glass, and the bearing included a neoprene bush that introduced the required flexibility. This additional flexibility affected the global structural stiffness in other less desirable ways, particularly the natural frequency.

The exact stiffness of the semi rigid joint was difficult to determine accurately analytically, so tests were performed for this purpose. Accurate force vs displacement diagrams were produced. The neoprene was the source of the flexibility in the system, and neoprene is a close to incompressible material with a Poisson’s ratio near 0.5. As such, its expansion under load was taken into account in the test, particularly as relates to the bond of the neoprene to the substrate.

With glass as an essential part of the load path, yet a brittle and breakable, redundancy was a key design consideration.

All structural glass was laminated with four plies such that the loss of any one would reduce the bending capacity of the glass by no more than 30%.

A SentryGlas interlayer was used throughout the project in order to provide post breakage performance. In the instance of total four ply glass breakage, the SentryGlas has tension strength, and thus some membrane and beam action can be developed with the broken glass. The broken glass can carry some compression, and combined with tension in the interlayer, flexure is possible.

The glass knee held the two halves of the column together, and carried significant dead load. If the glass knee was to fail completely, the steel had enough capacity to survive under at least dead load.

The structure was also engineered for any one total panel loss, whether accidental or during replacement. There were two completely independent glass knees, and either could be lost catastrophically. The overhead steel beams had enough lateral strength to be able to span across a missing panel.

iPhones incorporate accelerometers into their hardware, and additionally have the ability to query all of the hardware at a component level. An app was downloaded that recorded the acceleration data at a frequency of 1000Hz, and downloaded to a data file.

This acceleration data could be converted into displacement data by integrating the accelerations over time, and compared with the theoretical movements predicted by the models. Good correlation was shown.

Glass is an inherently strong material, and with proper detailing can contribute significantly to the total structure’s stability instead of simply being a secondary element. The Lincoln Center Canopies showed that this could be possible.

The paper has been firstly published in 2011 GPD Conference Proceedings Book, p. 589-592

Trends in bus glass processing - Glastory
The latest Glastory blog is dealing with the newest trends coming to the bus glass market - how the cut-outs, digital and screen printing, larger surfaces and thinner glass to reduce weight and fuel consumption is challenging the glass processing.
Probabilistic Study of Wind-temperature Interaction
An Initial Study Towards Optimized Structural Assessment of Glass Components
Glass Constructions Under Extreme Boundary Conditions
Constructions at exceptional locations are often challenging but worth one’s while. Extreme boundary conditions and sophisticated demands of the client have to be considered.
Trends in automotive display glass processing - Glastory
The latest Glastory post is dealing with the trends in automotive display glass processing.
Minimum Energy Performance Requirements for Window Replacement in the 28 EU Member States
In the European Union, Member States are allowed to set minimum performance requirements to construction products available on their market.
Trends in automotive glass processing - Glastory
In this blog post, we look at trends in the sunroof and windshield business today and how glass processors can prepare for them.
20 Farringdon Street - Case Study
Unitised Façade System Designed with a Highly Transparent Façade of Low G-value Combined with Blast Requirements
Glass Fins in Architecture
For years and years research, development and discussions have been made on the safety of glass structures.
Designing Impact Glazing to Meet Tornado Performance Standards
Building code requirements for wind-borne debris protection have been in existence since the mid- 1990s, and as a result, many glazing systems have been tested and certified to these performance requirements.
Comparative study of laminated glass fins using full-scale testing, finite element modeling, and buckling formulas
For nearly 50 years, glass has been used as structural elements in glass fin applications. These applications include interior and exterior projects, supporting facades, canopies, storefronts, curtain walls and skylights.
Anisotropy as a defect in U.K. architectural float heat-treated glass
Anisotropy is the term used in the façade industry to describe the manifestation of patterns and colourful areas in heat-treated glass under certain light and viewing conditions.
Post Breakage Strength Testing for Overhead Laminated Glass Applications
Post breakage strength of glass is still an unknown area as analytical models for this are inconclusive so far and thus destructive testing is the only reliable solution.