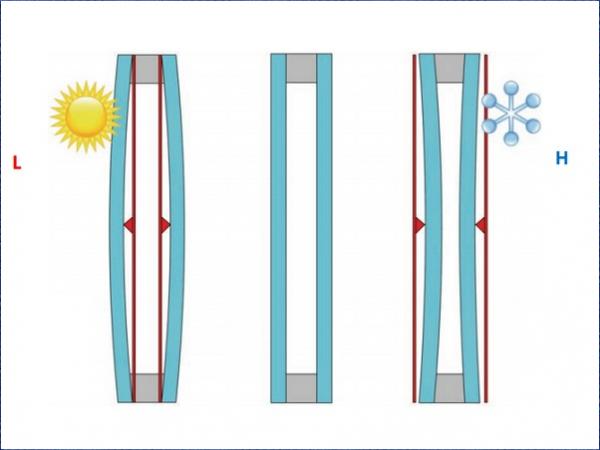 This paper was first presented at GPD 2019 by A. Rose from ift Rosenheim.

1 What is pressure-equalization of IGUs and what are the advantages?

Conventional insulating glass units (IGUs) are made of several sheets of glass separated by spacers and sealed hermetically around the edges. The cavity between panes is usually filled with argon. The seal keeps the ingress of moisture into the cavity low to prevent water condensing on the inside surfaces of the glass panes and to avoid any corrosion of metallic low-e coatings. Further, the seal prevents the fill gas from escaping.

There is a major drawback associated with this design: an exchange of gas or air between the cavity and the atmosphere is impossible. Thus, whenever the temperature in the cavity or the external air pressure changes, the pressure in the cavity changes as well. This causes the panes to bulge inwards or out, inducing flexural stresses in them. The edge seal is subjected to compressive or tensile loads. (Figure 1) Further, moveable solar shading devices integrated in the IGU might get trapped and damaged by panes bulging inwards.

Atmospheric effects as described above increase with format and inter-pane spacing (Figure 2). Thus, the overall depth of conventional IGUs has to be restricted to avoid any damage caused by changes in air pressure or temperature. Such restrictions would not be necessary if pressure equalization between the IGU cavity and the atmosphere could be achieved permanently.

So, the advantages of permanent pressure equalization are:

2 How can a permanently pressure-equalized IGU be realized?

Fresh air flowing into the cavity transports humidity from the atmosphere into the cavity. The moisture is being absorbed by the desiccant in the spacer until it is saturated. Then, condensation of water on the inner glas surfaces and corrosion of low-e coatings would follow. The durability of an IGU would be reduced to merely a few years.

There are two ways, in principle, to achieve a restriction of the air flow:

3.1 Principles of the model

Within the framework of a research project [1], ift Rosenheim has developed a calculation model which simulates the behaviour of a permanently pressure-equalized IGU with respect to the degree of pressure equalization and moisture uptake.

The model calculates the deflection of the glass panes, the related flexural stress in the panes and the moisture uptake due to the volume flow of air through the capillary tube or the valves, respectively. Diffusion processes through the edge seal or within a capillary tube are not represented in the model.

An iterative process yields suitable capillary tube parameters (inner diameter, length) or valve parameters (inlet and outlet pressure), in order to reach a balance between pressure equalization and moisture uptake of the IGU.

Figure 4 illustrates the pressure equalization by capillary tube and valves for the location Rosenheim as determined with the calculation model. The pane deflection is shown as a function of time. The x-axis displays the hours of one year, from 00:00 am on 1 January until 12:00 pm on 31 December. A positive value on the y-axis means outward bulging of the panes while a negative value means inward bulging of the panes.

The blue curve represents a hermetically sealed IGU. The curve follows the average daily temperature throughout the year. So, the panes bulge inwards during winter (because the temperature is lower than during the manufacturing of the IGU), and they bulge outwards during summer (because it is warmer than during the manufacturing). Further, the curve follows the daily temperature changes. (Normal variations of the atmospheric pressure have only a relatively small effect on IGUs in comparison to daily and seasonal temperature changes.)

The red curve represents an IGU pressureequalized via a capillary tube. The curve does not show any seasonal changes, and the daily amplitude is smaller than that of the blue curve. Both effects are due to the partial pressure relief caused by the volume flow of air through the capillary tube.

A curve for a pressure equalization via valves (green) is only shown in the detail of Figure 4b as it would partly cover up the blue and the red curve in Figure 4a. The valve parameters in this model calculation were set, so that the degree of pressure equalization would be similar to that caused by the chosen capillary tube. Typical for the effect of valves are the plateaus of constant deflection (here at about 2.2 mm).

This is when one of the valves is open, and air is flowing freely through it.

4 Does the moisture uptake depend on the location?

The results of model calculations for three locations with different climates are presented Table 1. Capillary tube and valve parameters were chosen so that the degree of pressure equalization was similar in all three cases. The values in the table indicate the moisture uptake due to the volume flow of air through the capillary tube or the valves, respectively. Permeation/diffusion through the edge seal and capillary tube are not considered in the model calculations.

There is a strong effect of the climate on the moisture uptake. For example, in Singapore about three-times as much moisture is getting into the cavity than in Rosenheim.

Further, IGU with valves show a considerably lower moisture uptake than those with a capillary tube. This is because for long periods, while the pressure in the cavity is between the setpoints of the two valves, the cavity is practically sealed. There is no exchange of air with the atmosphere.

EN 1279-3 Gas leakage [2]: Permanently pressure-equalized IGUs cannot be filled with argon or a similar gas as they are basically open to the atmosphere. A gas filling would escape within a few weeks. Therefore, a gas leakage test is not applicable.

EN 1279-2 Water penetration [3]: Conventional (hermetically sealed) IGUs absorb moisture via permeation/diffusion through the edge seal. The water penetration test of EN 1279-2 is designed to provide good conditions for this: a small specimen format to create high loads on the edge seal, a high concentration gradient between the cavity and the test chamber and last but not least a high test temperature. The evaluation of the EN 1279-2 test is based on many years of experience: If an IGU design passes the test, real-life IGUs will usually reach a durability of about 25 years and more.

For permanently pressure-equalized IGUs the situation is completely different. The main mechanism of moisture uptake is the volume flow of air due to changes in temperature or air pressure. If temperature and air pressure are constant, there is no volume flow. And the contribution of diffusion through the edge seal might be reduced as well because, after the pressure has equalized, there is no load on the edge seal which could potentially open up any flaws in the edge seal and favour diffusion through such flaws.

Further, no experience exists concerning the relation between EN 1279-2 test results and the real-life durability of permantly pressureequalized IGUs. So, passing the test does not say anything about real life durability.

Therefore, a water penetration test according to EN 1279-2 is not appicable to pressureequalized IGUs and even meaningless.

Large cavities in IGUs can be realized by applying pressure equalization.

The degree of pressure equalization has to be balanced against the moisture uptake to ensure a sufficient durability of the IGU.

Valves are theoretically very promising, however, suitable valves could not be found yet. Development work might be necessary.

There is no general solution. Capillary tube parameters and valve parameters have to be chosen depending on IGU format, construction and energetic absorption properties as well as the particular climatic loading.

Exploratory study on the load-bearing behaviour of laminated glass beams exposed to fire
This study provides a closer look at fire performance of glass beams and proposes further examinations to increase the load-bearing capacity in case of fire.
The Performance of Vacuum Insulating Glazing Units Subjected to a Soft Body Impact
The goal of this work is to investigate the mechanical performance of VIG’s subjected to soft body impact and gain insight into the failure mechanisms of the VIG when exposed to dynamic loads.
Adhesive solutions for cast glass assemblies
Ground rules emerging from built case studies on adhesive selection and experimental validation.
Differentiation in Architecture by Professional Designs and New Materials
The economy globalizes. The industries concentrate. The productions become uniform. Cultural specificities disappear. About architecture and glass in architecture, it is the same phenomenon.
Ahead of the Curve: Innovative Cold Bent & Insulated Glass Entry Wall
“Going ahead of the Curve” is what the advertisement states outside of newly remodeled, Class A office building at 160 Elgin Street in Ottawa, Canada.
Investigations on Linear Silicone Joints for Glass-Metal Elements with Composite Structural Behavior
In this article, experimental and numerical results obtained for linear structural silicone joints between glass and stainless steel substrates, investigated separately under tensile and under shear loading, are discussed.