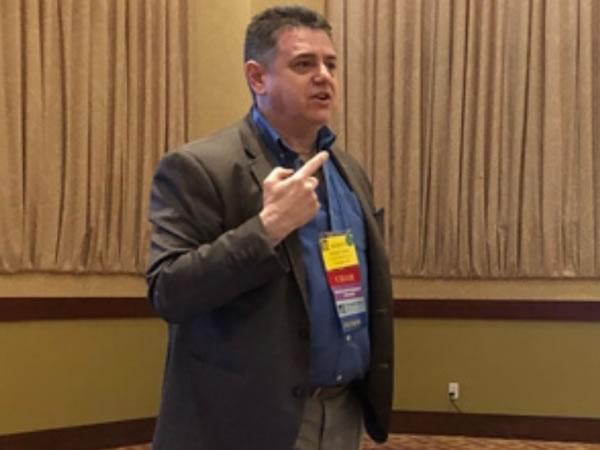 Robert Jutras (UL/CLEB) hosted a seminar on the differences between how Canada and the United States evaluate field performance of windows and curtain walls in large buildings during the American Architectural Manufacturers Association (AAMA) 82nd Annual Conference in Palm Springs (February 25-28).

Jutras, who is Canadian, focused more on the Canadian codes and practices for the benefit of a mostly American audience at the conference.

Jutras’s presentation compared building codes, including the 2018 International Builders Code (IBC) and the 2015 National Building Code of Canada (NBC), and discussed field performance evaluation in the U.S. versus evaluation in Canada, with a focus on what differences meant for air leakage and resistance to water penetration. He also compared the two countries’ takes on differential pressure versus wind speed.

AAMA standards, which can be used to evaluate the performance characteristics of other fenestration assemblies, include several in the AAMA 501 series of documents.

Jutras spoke about air leakage saying that, in Canada, the applicable laboratory test method for determining the rate of this is ASTM E283, Determining Rate of Air Leakage Through Exterior Windows, Curtain Walls, and Doors Under Specified Pressure Differences Across the Specimen. If field testing for air leakage is to be conducted, the applicable test method is ASTM E783, Field Measurement of Air Leakage Through Installed Exterior Windows and Doors.

In regard to water penetration, Jutras’s presentation showed examples of six cities on each side of the U.S. and Canadian border, close enough to support the hypothesis that climatic conditions should be comparable. Results showed that, on average, there are two times more pressure for resistance in Canadian cities than in U.S. cities.

Jutras noted that, when evaluating the relationship between differential pressure and wind speed, it is important to account for the building’s total elevation, given that the available wind speed data is usually measured near ground level.

More information about AAMA and its activities can be found via the AAMA website.

AAMA is the source of performance standards, product certification and educational programs for the fenestration industry.