The tetrahedron of fire - Wrightstyle 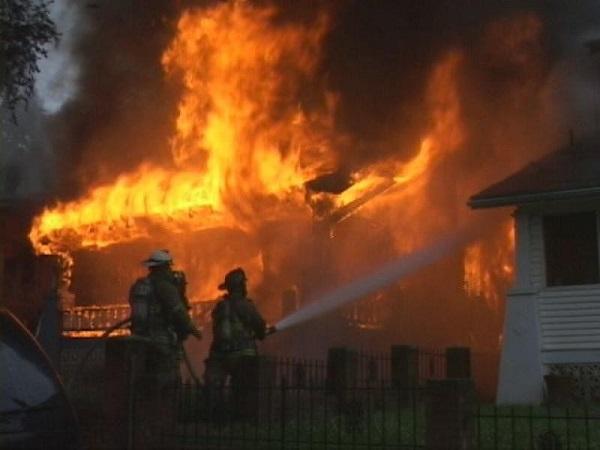 The International Association of Fire and Rescue Services (CTIF) collects fire data from 31 countries and 35 cities worldwide, representing some 14% of the world’s population.

The highest fire death rates relative to population were in Russia, Belarus and Ukraine.

CTIF says that, extrapolating the results and applying them to non-reporting countries, could mean that some 136,000 people are killed by fire every year, making it among the most common causes of death for children and young adults.

The difficulty, of course, is collecting fire data from countries, cities or regions where such data is not recorded although, despite some stark variations, the incidence of serious fire and fire fatalities is falling.

Most fatal fires occur in the home.  In developing countries that may be because of open cooking fires. In more developed countries, an electrical fault or a dropped cigarette.

However, the human cost can be much higher in a commercial building or, as we saw so tragically at Grenfell Tower, a high-rise residential building.

It’s why developed, and most developing countries, have fire regulations that should inform designers and developers on the necessary steps needed to minimise fire risk – although, understandably, poorer countries find it harder to police those regulations.

It also requires an understanding of fire dynamics – the fundamental relationship between fuel, oxygen and heat – the so-called fire triangle on which all fires, intentional or otherwise, depend.

Get those three elements together and the fire triangle is joined by a fourth element – the chemical chain reaction that is actually the fire. In technical jargon, the triangle of combustion then becomes a tetrahedron.

It’s a geometry that can either be friend or foe, as fuel and oxygen molecules gain energy and become active. This molecular energy is then transferred to other fuel and oxygen molecules to create and sustain the chain reaction. In an uncontrolled fire in a building, how it spreads of course depends on a whole range of factors – from the type of fuel (everything from ceiling tiles to furniture) to the building’s construction and ventilation.

Taming fire generally involves the removal of heat, in most cases using water to soak up heat generated by the fire. Without energy in the form of heat, the fire cannot heat unburned fuel to ignition temperature and the fire will eventually go out. In addition, water acts to smother the flames and suffocate the fire.

But what is also needed is containment – to prevent the fire spreading from its original location. That was evident at Grenfell and, all too often, in other uncontrolled fires internationally.

Those protective barriers, often external curtain walling or internal glass screens and fire doors, should not only contain the fire in one discrete area, but also provide escape routes for the building’s occupants and safe routes for incoming fire fighters.

That’s where fire resistant glass and glazing systems are so important, because modern steel systems are so technically advanced that they have overcome the limitations inherent in the glass itself.

The biggest limitation is that glass softens over a range of 500˚c to 1500˚c. To put that in perspective, a candle flame burns at between 800˚c and 1200˚c. In a typical flashover fire inside a building, temperatures can reach between 1000˚c and 1400˚c.

These temperatures can disrupt the integrity of conventional panes of glass, which are liable to crack and break because of thermal shock and temperature differentials across the exposed face. This compromises the compartmentation of the building’s interior allowing fire to spread from room to room.

That can, incidentally, be a problem that a sprinkler system actually causes. There have been several notable cases where cold water from a sprinkler system has come into contact with heated non-fire rated glass – causing the glass to break and allowing more oxygen to reach the seat of the fire.

As a fire escalates, the amount of heat produced can grow quickly, spreading like a predator from one fuel source to another – devouring materials that, in turn, will produce gases that are both highly toxic and flammable.

To make things worse, due to thermal expansion, these flammable gases are usually under pressure and able to pass through relatively small holes and gaps in ducts and walls, spreading the fire to other parts of the building. Heat will also be transmitted through internal walls by conduction.

As the fire worsens, and when unburned flammable gases reach auto ignition temperature, or are provided with an additional source of oxygen – for example, from a fractured window – an explosive effect called ‘flashover’ takes place.

Flashover is the most feared phenomenon of any fire fighter and signals several major changes in the fire and the response to it. First, it brings to an end all attempts at search and rescue in the area of the flashover. Simply, there won’t be anybody alive to rescue.

Second, it signals that the fire has reached the end of its growth stage and that it is now fully developed as an inferno. That then signals a change in fire-fighting response because it marks the start of a worse danger – the risk of structural collapse.

The fact is that most fires start with only a minimum of danger – a dropped cigarette, a spark from a faulty wire – and, if dealt with quickly or adequately contained, pose no real threat. However, an unchecked fire can spread with devastating speed, particularly in a large open space such as a supermarket, open-plan office or factory. And when it does get out of control, the best means of survival is escape.

Around the world, more stringent building and fire regulations have led to architectural and design teams taking a multi-disciplinary approach to assessing hazards – from power failure to cyber attack, from civil disorder to fire and explosive detonation – and arriving at risk assessments that, hopefully, illuminate how that that building should be designed and built.

Designing in safety is nothing new, and assessing risk is the starting point, and in particular the need to build in compartmentation throughout the building, and examining the whole building’s capacity to withstand a fire or other threats.

For the glazed components, that should mean analysing the level of containment the glass will provide and its compatibility with its framing system. Put the right glass into the wrong frame, or vice versa, and you could be turning sixty minutes of fire-resistance into five minutes. In an evacuation situation where seconds count, getting the design wrong at the outset could be a deadly mistake.

Evacuation is further complicated by the length of time it takes for people to leave a building. Many occupants won’t take the fire alarm seriously, particularly if false alarms have sounded before, or will want to finish what they’re doing first. This period – known as “start-up time” – is lengthened if occupants can’t see any visible evidence of a fire. A fire alarm, in itself, isn’t always alarming.

That’s a worry for us at Wrightstyle, because we know of 90 minutes fire specifications that have been reduced to 60 minutes of fire resistance by the developer, or from integrity and insulation to integrity only, to stop fire but not radiant heat – even in larger commercial buildings, simply for cost reasons.

For larger buildings, either commercial or residential – particularly where there may be people with mobility issues or who can’t easily self-evacuate – the minimum should surely always be 90 minutes.

There are many types of fire-resistant glasses currently on the market – and the ranges of products and sizes will continue to increase as the technology for combining glass and glazing systems develops. We’ve come a long way to meet the evolving design requirements of architects and the increasing stringency of building and fire regulations.

Simply, the glass and framing technologies now on the market mean that the impossible is now possible – even if some developers and contractors are now opting for cheaper fire resistant glazing options that we believe aren’t protective enough.