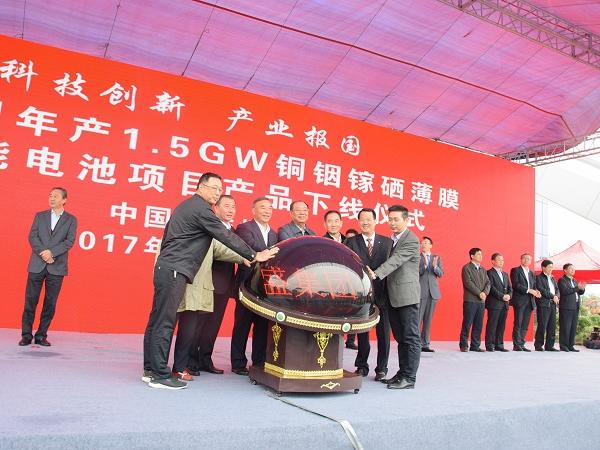 The start of the 300 MW factory is the first production unit of the largest CIGS solar factory at this location with a planned annual output of 1.5 gigawatts.

The 55,000 square meter CIGS technology was supplied by AVANCIS, one of the leading manufacturers of premium thin-film modules. In further development measures, the largest and most advanced solar production facility will be expanded to a total of 270,000 square meters. 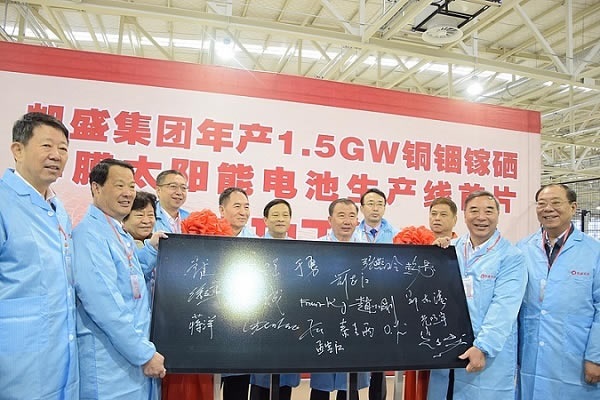 ‘China has ambitious solar energy programs. By the end of March 2017, the generated solar energy in the People's Republic of China increased to 21.4 million kilowatt hours. Nevertheless, solar energy accounts for only 1 percent of the Chinese energy mix’, explains Oliver Just, CEO of AVANCIS.

‘The demand for solar energy in the country is huge especially the demand for premium quality solar modules is enormous. With the start of production, we will have the opportunity to manufacture and market our high quality thin-film technology on site for the largest photovoltaic market. Especially in projects where quality and aesthetics are mission-critical factors, our glass-glass modules occupy a technological top position.’

In line with the high sustainability goals of the People's Republic of China, the expansion of solar energy through Giga Watt production facilities is being continuously advanced. In this context, CNBM has sealed three more CIGS solar factories with gigawatt production volumes in China with groundbreaking ceremonies over the last two years.

NorthGlass has created the Grand Canal Culture Museum with ingenuity
The project adopts 7 layers of 15mm low iron SGP laminated glass, with a maximum size of 12m and the each glass weight about 5.6 tons.
Hegla TaiFin: Batch optimisation together with Hegla Hanic
To optimally leverage the production resources of a tempering furnace, the bedload must strictly comply with production and quality requirements.
NorthGlass High-end Equipment Industrial Park project has entered a new stage
The project of NorthGlass High-end Equipment Industrial Park has entered the construction stage of main structure
Wiegand-Glas in Schleusingen puts furnace 2 into operation
The new end fired furnace, which produces container glass in the colours amber and green, was finally successfully commissioned at the end of the first quarter of 2022.
Okalux: Façade mix on campus
Part of the concept is the Abercrombie Building with its dynamic façade of concrete panels and glass, partly complemented by OKAWOOD insulating glass with Functional Timber Grid.
Fensterbau Frontale & Holz-Handwerk 2022 as „Summer Edition“
FENSTERBAU FRONTALE and HOLZ-HANDWERK exhibition is back at Exhibition Centre Nuremberg as a one-off “summer edition” from 12-15 July 2022.