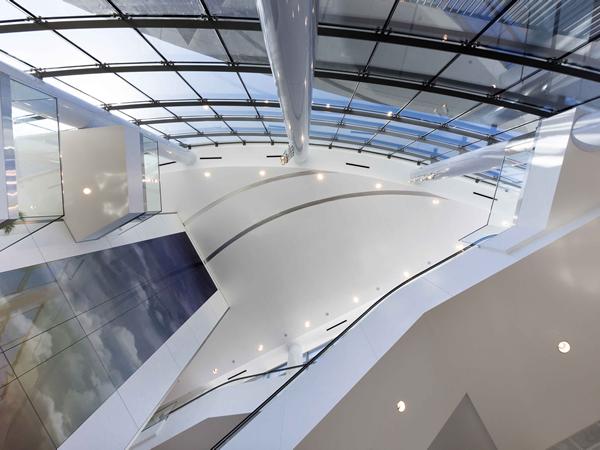 The glass installation and design team chose Pilkington Blue-Green Solar-E Plus™ Low-e for the outer glass of the insulating units for the tinted vertical walls of the sleek enclosure.

Air travel and especially perceptions of the experience are commonly misunderstood. If you talk to any airport executive, they will tell you that one of the most overlooked aspects of air travel actually takes place on the ground.

Navigating an intricate number of issues like protecting against new security concerns, adapting to new technology used by passengers, and traffic flow between concourses can give airlines and airports alike many headaches. It may even determine an airport’s reputation of being a prime destination to fly in or out of or… one to avoid. 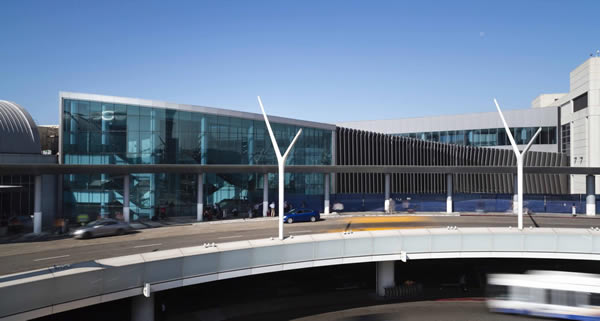 There are few airports more well-known or busier than Los Angeles International Airport (LAX). LAX is iconic in print and on film as a romantic and dream destination.  But today’s increased traffic and expansion has posed many new challenges.

It is the sixth busiest airport in the world and third in the United States, offering 680 daily flights to 96 domestic cities and 930 weekly nonstop flights to 59 cities in 30 countries. One of the big issues at LAX is the inability to make connections between terminals without having to leave security.

One of the airport’s long-standing overall goals was constructing a post-security connector between the airport’s Tom Bradley International Terminal with the always busy Terminal 4. LAX serves nearly 69.7 million passengers. With such an incredible number of people passing through each day, the need for a streamlined system is evident.

Airport management knew that both terminals serve a significant amount of the airport’s traffic. Besides being safe, secure, and efficient, it must be practical and consider passenger’s preferences and needs.

The new connector does that and more. The $115 million project includes an outdoor patio, retail and food outlets, and a streamlined baggage transfer experience for those arriving on international flights and connecting onward. 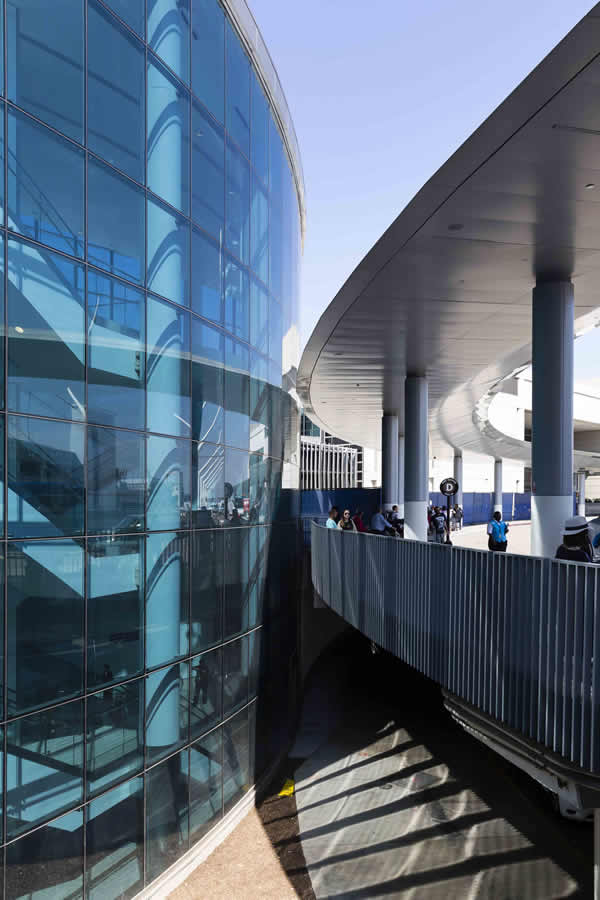 Los Angeles World Airports selected Corgan as the design architect and Turner Construction as the construction manager to spearhead this endeavor.

One of the key aspects to consider in the development was integrating sustainable building practices into LAX’s new architectural vision for the airport and adding an environmentally-friendly element to the improvement of passenger circulations.

That team also knew that with the airport’s existing design, climate conditions, and eye for modern techniques it needed to feature a highly transparent expansive glass facade.

They relied on Bagatelos Architectural Glass Systems, Inc. as the installer working with W&W Glass, LLC, the structural glass supplier of the Pilkington Planar™ system, to ensure the highest level of quality and integrity of the architect’s vision. 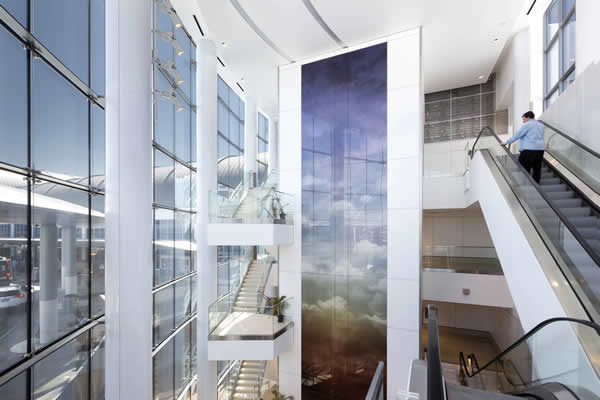 The glass installation and design team chose Pilkington Blue-Green Solar-E Plus™ Low-e for the outer glass of the insulating units for the tinted vertical walls of the sleek enclosure.

The glass units also utilized Pilkington Optiwhite™ low-iron Trosifol® SentryGlas® interlayer laminated glass for the inboard lite for strength and ultra-clear color clarity, thereby allowing the blue-green colored glass to be as true as possible from the exterior.

This combination provided the utmost in energy efficiency, glare control, and overall occupant comfort. The glass units featured a special glazing make-up where the point-supported Pilkington 905 series bolt fitting head is concealed within the interior of the unit, clamped against laminated lite only.

This system, known as Pilkington Planar™ Intrafix, uses no exposed fittings penetrating the structural silicone-glazed outboard lite. Aside from a very clean aesthetic, this also allows window washers to clean down the exterior of the wall without any dirt getting trapped around fittings which can happen with exposed caps or bolts. 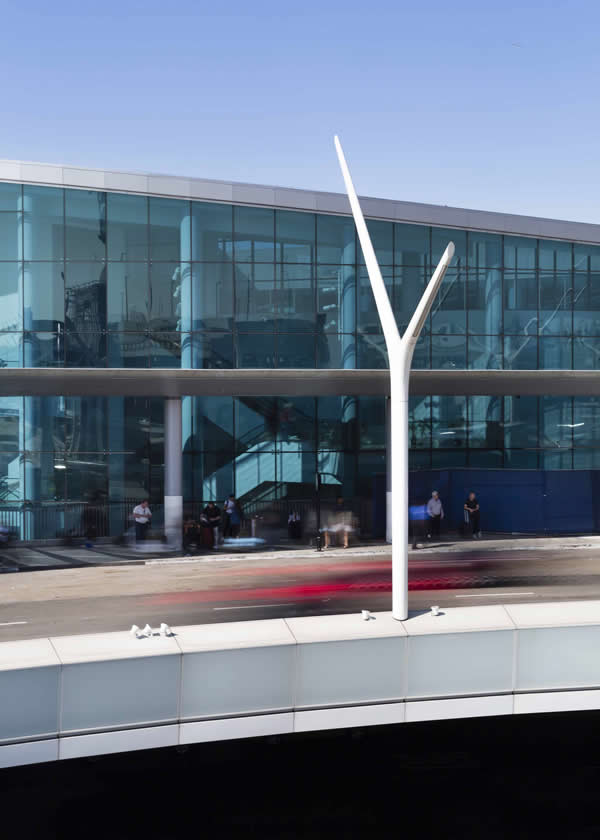 The design featured a minimal back-up structure using a thin, curved AESS steel plate beam and stainless steel sag rod design connected back to columns. The beams at each level act as a lateral bracing while the stainless tension rods transfer the dead load of the glass to the head structure and pick up the sag of the plate beams between columns.

The beams are located at each level to provide a location to connect the fittings for the four-point supported glass panels. The complete system was engineered and supplied by W&W Glass in concert with Pilkington.

The new CAL Green Certified-space will include a Checked Baggage Inspection, South Matrix Interline Baggage Transfer facility, and a four-lane Passenger Security Screening Check Point. A South Terminals Passenger Bus Port is also being added for future use, and a public plaza will be built for outdoor seating on the upper level.

Now, thanks to a network of tunnels, corridors, and the new connector, anyone traveling between the Bradley Terminal and Terminals 4 (American), 5 (Delta), 6 (Alaska), and 7/8 (United) will be able to walk back and forth without leaving security. Sometimes, the fastest aspect of air travel can happen on the ground. 600450
www.wwglass.com
LAX Terminal 4 Connector Building – You Are Now Free to Move Between the Terminals glassonweb.com