Grenzebach with highlights at the glasstec 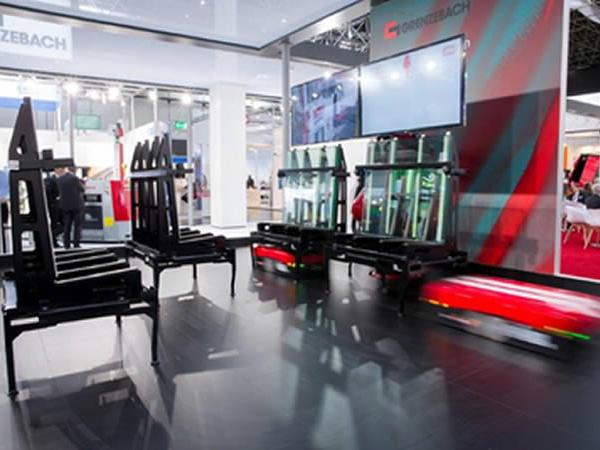 A specifically for thin glass designed cutting head applying constant pressure onto the glass. Automated Guided Vehicles for the distribution of packed glass.

Smart glasses that have the potential to revolutionize remote maintenance - these were some of the highlights Grenzebach presented at this year's glasstec.

A special highlight at the show was an Automated Guided Vehicle for the distribution of glass packs. Markus Gruber, representing the company's "New Business" said that Grenzebach wanted to automate the individual glass pack distribution.

Drivers work three shifts around the clock. Grenzebach developed a system to bring the racks to the distribution points automatically.

Roland Jenning, Manager Research and Development, explained that the vehicles were customized for the specific demands and used "contour navigation".

They explore their environment by means of laser scanners to allow autonomous orientation. This entirely new self-learning system requires no modifications to existing sites.

The presented L1200S is a futuristic looking vehicle suited for loads of up to 1200 kilograms. Roland Jenning stated that Grenzebach could build transport vehicles with a carrying capacity of up to 5 tons. The design is customized to actual needs. 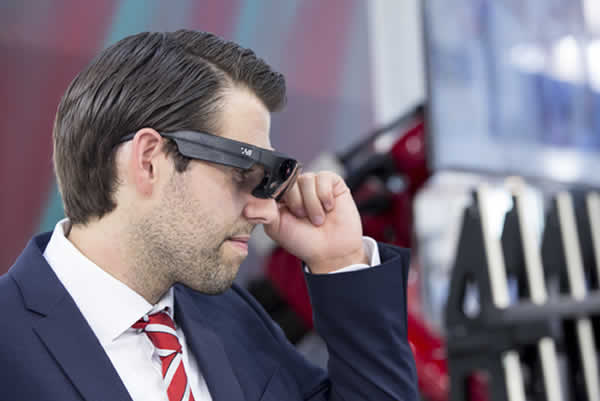 Remote maintenance has become the standard in large size machinery and plant engineering. Using various parameters, manufacturers are able to consistently monitor the equipment status and make adjustments if needed.

Any time a problem occurs, either the system operator can fix it right then and there or the manufacturer sends a service technician.

Markus Gruber responsible for Grenzebach's "New Business" explained that remote maintenance did however have its limits and that with the current technology Grenzebach were limited when it came to error detection.

But he also said that Grenzebach was already ahead of the game. At glasstec, the system showcased was a one-to-one application, meaning that it is able to see and hear what the on-site technician experiences while operating the equipment.

The technician is wearing a set of glasses with integrated microphones and a mini camera which transmits image sequences to the manufacturer’s computer screens and allows for direct communication.

But we don’t stop here! Even drawings needed for repairs can be projected onto the glasses and codes such as data matrix read in.

Roland Jenning, Head of Development, explained that they were using a series product and that it was not the glasses that matter the most, but the actual applications which were exclusively developed at Grenzebach.

The benefits of the new system are obvious. Critical information is quickly made available. Response times are reduced significantly.

Gruber added that maintenance and service were facilitated and that troubleshooting was much easier and more effective; additionally the system allowed for fast and direct communication with the plant operator, all of which maked for an outstanding service support.

Another novelty presented at the exhibition was the brand-new cutting head especially developed for thin glass. While it is quite challenging to apply constant pressure onto the glass using a preset value, the trick is done by the strain gage, added to the cutting head, which records the applied pressure in real time.

Consistent cutting pressure produces significantly less waste compared to the conventional cutting approach while at the same time an improved scoring and snapping quality can be accomplished. Furthermore, the collected data can be stored in a database for analysis and subsequent control system optimization.

Rührer said that if the data showed a consistently moving up and down cutting pressure, this was probably an indicator for improper glass thickness settings.

The cutting head is available not only for new but also for existing Grenzebach processing lines. It is suited for all glass thicknesses with particular focus on thin glass ranging between 0.1 and 1.2 millimeters.

600450
grenzebach.com
Grenzebach with highlights at the glasstec glassonweb.com

GPD Finland 2023 is calling for abstracts
GPD Finland 2023 set for June 14 – 16 is calling for abstracts.
July 19 FGIA Webinar to Cover Recent Market Study Information
The Fenestration and Glazing Industry Alliance will host a webinar entitled “FGIA U.S. Market Studies Overview with Forecasts ” on Tuesday, July 19 at 11:30 a.m. Eastern.
LiSEC celebrates employees as a success factor with almost 2,000 visitors at LiSEC Family & Friends Day
After a longer break due to Corona, the LiSEC Family & Friends Day took place on 24 June 2022 at the Seitenstetten site.
Global science leader joins Glazing Summit
UL, a global safety science leader, is the latest company to come on board for this year’s Glazing Summit, which takes place on Tuesday, October 18 at Edgbaston Stadium, Birmingham.
Gimav is going to Glass South America 2022
A strategic appointment to strengthen ties with South America and reaffirm Made in Italy in the world
Hegla TaiFin: Batch optimisation together with Hegla Hanic
To optimally leverage the production resources of a tempering furnace, the bedload must strictly comply with production and quality requirements.