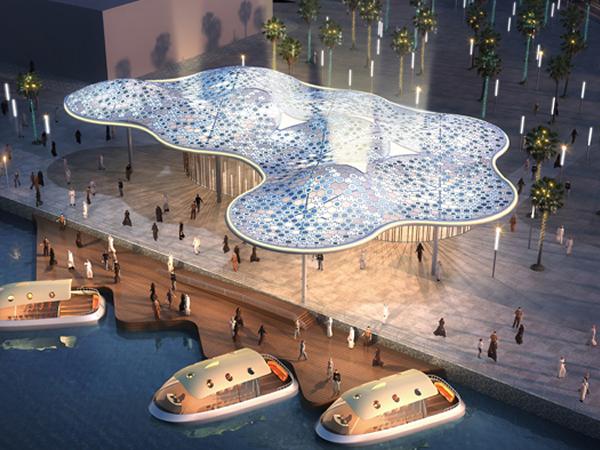 A design concept based using solar power and paying homage to the fishing and pearling heritage of the region has been chosen for RTA’s new marine stations.

Atkins has won a design competition for new marine transport stations along the recently created Dubai Canal for the Dubai Road and Transport Authority (RTA).

The marine stations will provide transport links for commuters and tourists from Business Bay to Jumeirah. An estimated 13 million passengers use marine transit each year.

Atkins’ winning concept was derived from Dubai’s heritage and the historic fishing and pearling culture of the region. A large translucent canopy over each station symbolises a fishing net being cast into the water, and provides shading to the pontoon and station building beneath.

Photovoltaic panels are incorporated into the canopy to generate solar power to supply light at night time to the stations which glow like beacons along the canal. The station itself is designed to maximize the views over the canal and the city beyond.

Adrian Lindon, Atkins Fellow and director of architecture said: “The sustainable design aims to generate its own power and hence reduce operational cost and reflect RTA’s commitment to the environment. We are now looking at the possibility of 3D printing some of the station structure modules. The Dubai 3D Printing Strategy is particularly relevant to the construction sector with a target to 3D print 25 per cent of buildings in Dubai by 2030.”

Adrian continued: “The Dubai Creek is of deep historic and cultural significance to Dubai and has been since the early 20th Century. Opening the Dubai Water Canal in 2016 and developing more public transport choices throughout the city demonstrates the innovative vision of the RTA and the Government of Dubai. Public transportation is the cornerstone of smart healthy cities, as such the RTA is playing a vital role in meeting Dubai’s Smart City aspirations.”

Atkins is celebrating 50 years in the Middle East region this year, and has helped important clients like the RTA realise their visions through the design and delivery of the region’s most important projects. Atkins was the lead designer for the Dubai Metro, a project that has fundamentally improved the quality of life in the city.