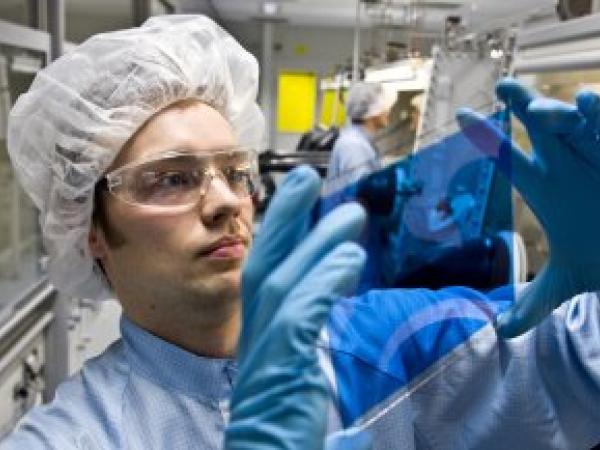 The efficiency of photovoltaic modules is far from being exhausted. Companies are fighting on many fronts to gain percentage points.

In addition to the cells themselves and the production process, the focus is also on modular glass. The latest developments in glass technology offer additional efficiency improvements, and there are many as yet unexploited possibilities.

Californian solar producer Sunpower defends its position as innovation driver in the photovoltaics (PV) sector. In an industry-oriented production process, the company has developed a solar cell that converts sunlight into power with an efficiency level of 24.2 percent.

Thus the Americans have improved the efficiency of their cells by four percentage points over the past five years and are now closing in on the world record set by the University of New South Wales in Sydney. By the late nineties, Australian researchers had already developed a silicon cell with an efficiency level of 24.7 percent.

Sunpower’s key to high efficiency is the back-contact concept. “We banish all power connections of our monocrystalline silicon solar cells to the backside”, explains technologist Bill Mulligan. Therefore the front of the cells, which is facing the light, is not shaded by metal tracks, and more light is available for energy production.

Due to its excellent performance, this technology is highly sought after. Backside collectors manufactured in serial production achieve an efficiency level of just under 23 percent – and a level of 19.5 percent relating to the module. Common silicon panels achieve an average of 13 to 16 percent.

More than any other factor, the efficiency level affects economic efficiency during the production of cells and modules. As a rule of thumb, each percentage point of increased efficiency lowers the costs by approximately 5 percent, as less material is used per watt.

For Sunpower, however, this cost-reducing effect does not apply because of the expensive monocrystalline semiconductor and the cost-intensive mode of production. Backside collectors carry both the negative and the positive pole on the backside. Therefore they must be interlaced in order to avoid short circuiting. “This requires additional process steps and lots of know how“, says Jan Schmidt, Institut für Solarenergieforschung (Institute for Solar Energy Research) in Hamelin (ISFH).

Focus on innovation: The search for more efficient semiconductors for solar cells concerns researchers and engineers all over the world (Source: Bosch)

Companies are feverishly researching more cost-efficient alternatives. The Japanese company Sanyo, for example, has developed a mono-cell that is surrounded by layers of cost-efficient amorphous silicon. These layers mainly function as a barrier which prevents that charge carriers produced inside the crystal are lost at the surface.

This increases the efficiency of the cells to 20.7 percent, and the modules manage and output of 18.2 percent. Alfasolar from Hanover, on the other hand, focuses on optimizing the module itself. The company uses multicrystalline cells produced by the Belgian company Photovoltech that offer up to 17 percent efficiency and packages these little powerhouses behind modular glass with pyramid-shaped structures.

Thus, exiting rays are reflected on the inside of the glass in such a manner that they again meet the cells and are given a new chance for absorption if they have not been converted into power upon first contact with the silicon. Using this technology, Alfasolar generates maximum power from the cells. The efficiency of the modules is 15.4 percent.

In the meantime, more and more manufacturers are using anti-reflective glass to improve efficiency, and light traps are only one way to better exploit the photons. For example, Centrosolar Glas from Fürth adds tiny air-pores to the anti-reflective layers of its glass, which allow for a softer transition of the light. Structured and coated solar glass offers a further advantage. Its surface is smoother than conventional glass, as it is heavily compressed in a rolling process.

For this reason, dirt and water roll off like they would on a lotus flower and do not affect the incidence of light. Glass specialists will show their innovations at the leading international trade fair of the glass industry, glasstec, from 28 September to 01 October 2010, or during the trade fair for solar production technology, solarpeq. Both events are held simultaneously in Düsseldorf.

In the case of concentrated PV, the focus is also on clever channelling of the light. The modules contain mirrors or lenses that concentrate the rays onto one tiny cell. The most effective among them achieve efficiencies of up to 40 percent. “In good locations, concentrator systems can already produce cheaper power than traditional flat modules”, says Andreas Bett, manager of the solar cell department at the Fraunhofer Institute for Solar Energy Systems (ISE) in Freiburg. However, concentrator modules must be aligned exactly with the sun, which increases costs and is almost impossible for roof-mounted systems.

Complex production: The production of solar cells and modules requires extensive process know-how. For this reason, it can take years before new developments can go into serial production. (Source: aleo solar)

The competition is also very active in the sector of thin-film technology. The highest efficiency potential is attributed to CIS cells. This abbreviation refers to semi conducting compounds of copper, indium, gallium, selenium or sulphur. This way, the National Renewable Energy Laboratory of the USA achieved an efficiency of 20.3 percent. However, industrially produced cells still have a long way to go, and with regards to production costs, they have not yet moved ahead of the crystalline competition.

“As far as CIS is concerned, the existing production units are still too small. Once mass production has started, the costs will decrease,” states EU energy expert Arnulf Jäger-Waldau. Thin-film modules made of cadmium tellurid are developed further. The U.S. company First Solar is already producing them for € 0.60 per watt. Very few manufacturers produce modules for less than one euro per watt.

Nano cells offer another option for PV. Here, tiny plastic or pigment particles convert light into energy. Heliatek from Dresden, for example, has developed a process in which pigment molecules are extensively applied to plastic foils using vacuum evaporation. Since this procedure uses little material and energy, the production costs are falling. The Saxons are aiming at € 0.40 per watt, which would be far below the costs of conventional solar modules.

However, one major weakness of the nano cells is that they lose their efficiency quickly since the polymers and pigments used as semiconductors deteriorate rapidly. Because of the many applications possible, researchers are working on improving the durability. Thanks to their low weight and their flexibility, the slim power generators can easily be integrated into buildings as power-producing glass façades or windows. Experts forecast major growth potential for the market segment of building integration. Nano PV offers a new field of activity to machinery and plant manufacturers.

Companies such as Centrotherm, Leybold Optics or Von Ardenne, all of which will show their innovations at solarpeq, are already supplying thin-film producers and manufacturers of organic light emitting diodes (OLED) with coating systems. These machines will also be requested increasingly by manufacturers of organic or pigment cells. At the special exhibition glass technology live, held in conjunction with glasstec, examples of aesthetic façade-integrated photovoltaics or multi-functional façades will be on display.

Delicate goods: The production of thin-film modules takes place in the clean-room. Even smallest impurities affect the efficiency. (Source: Inventux)

Despite the large potential for development of thin-film technology and similar processes, Stefan Glunz, manager of the Department for the Development of Silicon Solar Cells at the ISE, believes in the future of silicon cells. He thinks that their long-term stability is undisputed and their efficiency can be improved with little effort.

Efficiency increases of one percent can only be achieved if better anti-reflective layers can make use of more radiation and new, so-called passivation layers can counteract losses in the charge carriers on the surface of the crystals. New methods for the production of cell contacts are also helpful. Nowadays, frontal contacts are produced most often by screen printing using metallic pastes.

The wide contact fingers thus produced impede the incidence of light and offer higher resistance. In addition, high forces are produced during printing, and only thicker cells are able to withstand the pressure. Therefore, the ISE is developing metallization processes that do not require screen printing. “We are focusing on the chemical separation of metals or the contactless printing of metal aerosols”, says Glunz.

Further efficiency improvements are promised by “N-type” silicon, a positive conductive absorber enriched with boron. This special variant of silicon offers particularly good electrical characteristics, however, it is difficult to handle in production because of the highly reactive boron.

An optimal passivation of N-type cells cannot be achieved with traditional barrier levels. In cooperation with the Energy Research Centre of the Netherlands (ECN) and US systems producer Amtech Systems, the Chinese PV Group Yingli Solar has recently developed a process suitable for industrial application for the N-type cell.

The modules, which Yingli plans to manufacture from the new light collectors starting in autumn 2010, are expected to convert up to 16.5 percent of the light into energy and – with an output of 190 to 315 watts – perform easily as well as the panels offered by western producers.

An alternative could lie in the so-called metallization wrap through cells (MWT). Here, the power collection tracks required for the interconnection inside the module are moved to the back side of the cells and are connected to the metal contacts on the front through 16 holes drilled into the wafer. This threading of the metallization reduces the creation of shadows.

Thus, MWT may be a preliminary step to the backside collectors produced by Sunpower. It is easier to realize because, in contrast to the Sunpower collectors, the contacts remain on the front. Nevertheless, efficiency can be significantly improved by this “simple” measure. In December 2009, the ECN and the Norwegian PV Group REC achieved an efficiency of 17 percent with modules made of so-called MWT cells of multicrystalline silicon.

This cooperative venture surpassed the efficiency record for MWT cells held by Sandia National Laboratories in the USA by 1.5 percentage points. Even using a standard semiconductor, efficiencies can now be reached that were only possible with expensive high efficiency cells in the past.

No matter which optimization option PV producers use, in the end innovative production methods are the decisive factor when it comes to competitive manufacturing costs. In this connection, the PV sector benefits from the specialized know-how of the companies from the glass industry that have experience with vaporizing, printing, laminating of glass or the development of new specialty glass. Both business sectors come together for the first time in this manner at glasstec and solarpeq in Düsseldorf – a good basis for higher efficiency in future.

Groundbreaking: Thanks to new solar technologies such as nano-solar-cells, building-integrated PV develops into a major market segment. The central station in Berlin is one of the early, successful projects. (Source: BSW)

VDMA: Recycling flat glass – circular economy with potential
Sustainability and the circular economy are increasingly influencing work and production processes in glass manufacturing, too.
glasstec Specialist Article No. 4: Glass in Modern Architecture
Held in Düsseldorf from 15 to 18 June 2021 glasstec will pick up on the latest glass trends related to shapes, formats and structures.
glasstec Specialist Article No. 3: Digital Skilled Trades
Digitalisation is not only something for start-ups or major enterprises. It applies just as naturally to many skilled trade businesses.
Structural Glass Walls-Gravity and Stability Elements
In this paper we will look at the potential of what is now a commonly used component in facade design - a load-bearing glass wall panel.
One Single Model: Structural Glazing Analysis for Complex Shape Structures
The “One Single Model” approach rises as the best tool to manage complex buildings through the different engineering branches.
Determination of Interlayer Mechanical Properties for Use in Laminated Glass Design
We have seen rapid expansion in the last decade of laminated glass design using modern analytical and computational methods.