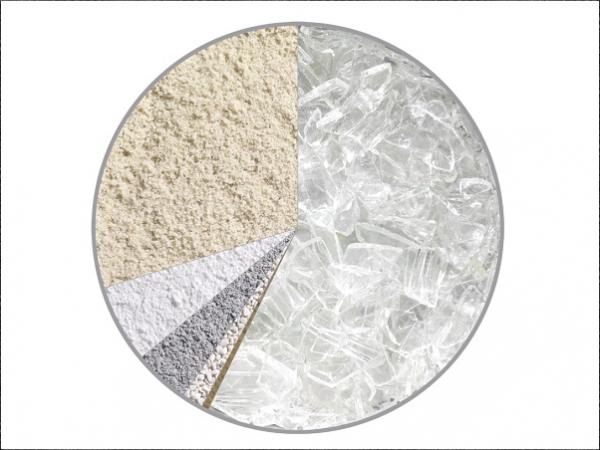 The use of renewable energies will play a role at “glasstec 2020” as well as at its special show “glass technology live” held in Düsseldorf from 20 to 23 October 2020.

The production of glass or molten glass, to be precise, is doubtlessly very energy-intensive. The approx. 6,800 tons of glass produced in Germany in 2015 consumed almost 18.50 terawatt hours of energy. By comparison: in 2019 the entire power generation in Germany amounted to some 607 terawatt hours. Almost 273 million tons of CO2 were emitted just from power generation in this country.

At 44% container glass accounted for slightly less than half the energy consumed in glass production. Approx. 29% of energy was used for manufacturing flat glass and another 11% for processing it. The remaining consumption was accounted for by fibreglass and special glass production. The lion’s share of energy required at just under 80% takes the shape of process heat, which is predominantly obtained from natural gas. Additionally, electricity is needed for electrically propelling machines and electric boosting for melting.

In glass production temperatures must be kept constant. This is the only way to ensure the sustained high quality of the finished products according to the Federal Association of the Glass Industry (Bundesverband Glasindustrie e.V. (BV Glas)). Against this backdrop a constant energy supply of sustained quality is imperative because glass production is a non-intermittent process 24/7 365 days a year.

In the wake of the on-going energy transition and desired decarbonisation, various alternatives to natural gas are currently being considered and studied. In Germany, for example, one container glass producer will build the first hybrid oxy-fuel melting tank, which can be operated with 80% renewable energies. The aim is to save 50% CO2 emissions in melting.

The project was initiated by the European container glass industry and is funded by the EU. BV Glas has launched a project on the national level that looks at whether hydrogen is suitable (Power to X) for being added to, or even replacing natural gas. Even the use of biogenic fuels based on biogas, for example, could be considered but is challenging due to the high demands made and need for consistent quality.

On top of this, glass melting also produces fine dust as a result of waste gas scrubbing and fine grains when reclaiming cullet. In Germany the percentage of waste glass reused ranges from roughly 60% for white glass to almost 95% for green glass. As a matter of principle, glass is a material that can be recycled 100% time and again without any loss of quality.

The resulting dust, however, could not be molten and used for production so far because this would have caused plenty of dust in the combustion and regenerator chambers and, hence, led to process disruptions and damage to the plants. As part of an environment innovation programme a solution was found for this and a plant was funded at a Bavarian glass manufacturer for the beverage and food industry. In this plant the fine dust is compacted into briquettes and then introduced fully automatically into the melting tank with cullet and primary raw materials. This reduces waste by some 25,000 tons annually and saves about the same amount of primary raw materials.

Just as important as climate protection and sustainability including compliance with the Paris Climate Accord is, of course, maintaining competitiveness and/or the further economic growth of this industry. To reconcile both of these objectives there are various strategies and concepts such as the “IN4climate.NRW” initiative launched by the North Rhine-Westphalian government or the energy efficiency network “GlasNET 2.0”, a network of companies in the glass industry under the umbrella of the Energy Efficiency Network of the Federal Government.

A crucial component for improving environmental protection and sustainability is a continued expansion of the recycling industry. Here, the aspect of resource savings also comes into play. Despite fully operational material cycles glass recycling still has some fields that require exploring from scratch. A case in point is the following example of a large-scale plant erected to break down cathode ray tubes from TV sets.

The introduction of modern displays using LCD, LED, plasma and 3D technology entailed a rapid replacement of old CRT TV sets and monitors over the past years – and, hence, over 160,000 tons of used sets per year. Today, there are only small quantities of CRT sets being discarded but in this day and age we are confronted with the question of how to find a meaningful exploitation of the coated glass tubes that are usually treated as hazardous waste.

In the mid-1990s ZME Elektronik Recycling GmbH already commissioned a plant that could sort up to 500,000 tubes and allocate the materials to the respective glass types for further reclamation. The plant was something special because systems for treating and cleaning cathode ray tubes, so-called decoating lines, were not available as standard solutions in machinery and plant engineering. The experience gained back then served as a blueprint for engineering a bigger and more modern plant commissioned in 2007.

The aim of television tube recycling was to retain the raw materials included in the glass matrix such as lead, barium, strontium etc. Today, these raw materials are increasingly extracted and the tubes are practically de-coated. Reusable picture tube glass only requires a very low energy input for re-melting and therefore saves between 10% and 15% of the heating energy required. What’s more, meaningful recycling helped to remove television tube glass from other “recycling paths” such as road building or construction and also rendered landfill superfluous.

This example shows that practically every technical development requires its own recycling concept. Recycling of Laminated Glass | Luc Moeyersons
Laminated glass recycling is becoming increasingly important and urgent due to limited raw materials.
The Recycling of Waste Laminated Glass through Decomposition Technologies
The paper deals with the recycling of laminated glass, especially with the effective separation of glass (in the form of cullet) from the polyvinyl butyral (PVB) interlayer film.
Make or break the loop: a cross-practitioners review of glass circularity
End-of-life insulating glass units (IGUs) continue to follow a linear, wasteful path from renovation and demolition sites into landfills or low-value recycling.
GlassBuild America 2022
See you next year in Atlanta!
Glasstec 2022
Check out the latest updates from glasstec
In between: An Interlayer Material Study for Interlocking Cast Glass Blocks
An Interlayer Material Study Towards Circular, Dry-Assembly, Interlocking Cast Glass Block Structures