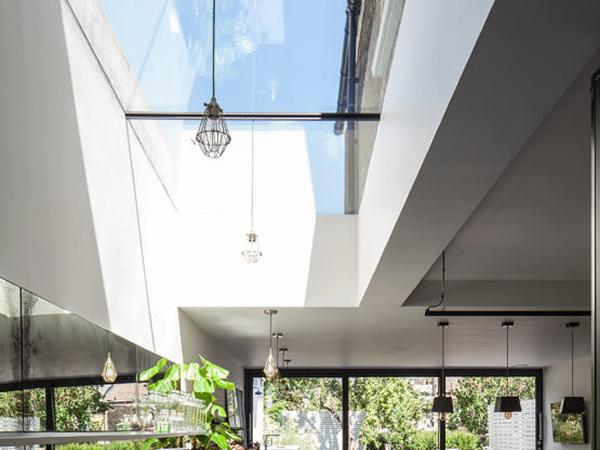 The installation of a Flushglaze fixed rooflight from Glazing Vision was key to unlocking the natural light in the windowless kitchen area.

This fine Victorian terraced house is located in the fashionable Harringey Ladder within the North London Borough of Haringey, and was recently one of the residences open for public viewing as part of the Open House September 2017 tour. 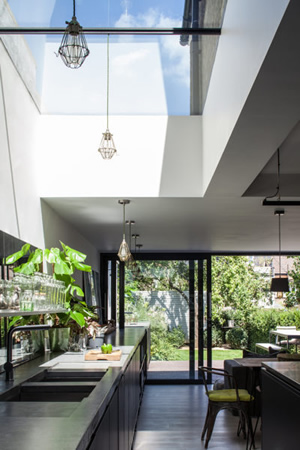 Renovated throughout to an exceptional standard by Trevor Brown Architects, the house also boasts a new, contemporary extension, which has been sensitively designed to seamlessly integrate with the more traditional décor of the rest of the ground floor.

The extension, which opens out through glazed doors onto an attractive decked terrace and garden, accommodates a state-of-the-art kitchen as well as an eclectically styled diner/family room.

The installation of a Flushglaze fixed rooflight from Glazing Vision was key to unlocking the natural light in the windowless kitchen area, which shares its exterior wall with the neighbour’s house.

Properties on the “rungs”of the Harringay Ladder have much sought-after heritage features: impressive front doors, spacious rooms with high ceilings, and sizeable back gardens.

However, without wishing to lose the period charm of the house, the owners at Allison Road were seeking to modernise the interior to suit their young family, as well as to increase the footprint.

The rear reception room presented an opportunity to extend and to create a generously sized, modern kitchen and snug where the family could eat, relax and entertain.

Trevor Brown Architects, known for their respectful restoration of such period properties, were appointed to design the required renovation and extension. The original rear room had been fairly narrow, and there had been a rather alley-like path alongside it running from the back door towards the garden.

Brown designed the new extension so that it abutted the neighbour’s outer wall, thereby taking advantage of the full width of the client’s property. The large garden allowed for some “land grab” so that the extension could be built to measure a not inconsiderable 8m x 5m. 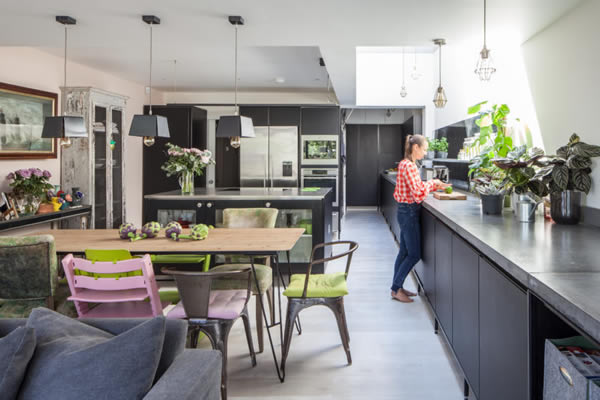 Maximising the light in a windowless kitchen

But the connection to the neighbour’s wall brought a challenge with it – there was no possibility to incorporate a side window in the designated kitchen area of the extension.

To overcome this, Brown looked for a way of bringing the light in from the roof, without adding any unsightly exterior furniture, which might negatively impact on the appearance of the extension.

Having already had positive experience of using Glazing Vision’s products on previous projects, the architect specified one of their fixed Flushglaze rooflights for use on the Allison Road extension as it offered a number of benefits.

Firstly, it met a very specific requirement – it could be fitted to abut all 3 walls that framed the roof of the extension (2 from the client’s home, one from the neighbour’s house). Its clean, minimalist exterior would raise no concerns from the neighbour, nor ruin the views from the garden towards the house.

The lack of any unnecessary bulky capping would mean that the Flushglaze fixed rooflight would not trap dirt or debris, an important consideration given the recessed position of the rooflight and the limited access to it.

Secondly, given the need for a bespoke size of rooflight to maximize the amount of daylight entering the extension, Brown sought the precision engineering offered by Glazing Vision’s factory in Norfolk. The resulting Flushglaze rooflight was made in 3 sections, providing a span of 1600mm and a width of 4300mm, with a silicone seal at the join. 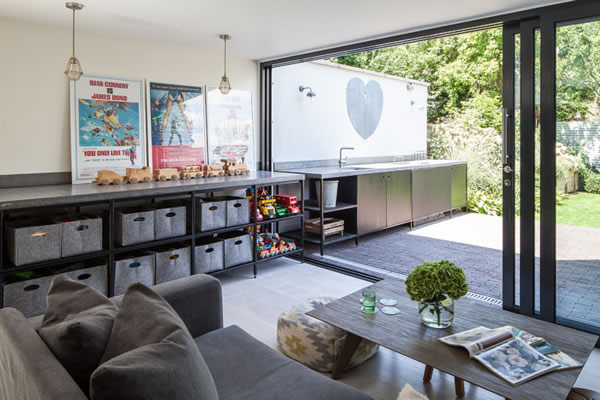 The risk of condensation forming on the internal frame, which is caused by “cold bridging”, is also kept to an absolute minimum. The framework is sealed by a gasket, which means there is no need for a thermal break, thus keeping the profile as reduced as possible. 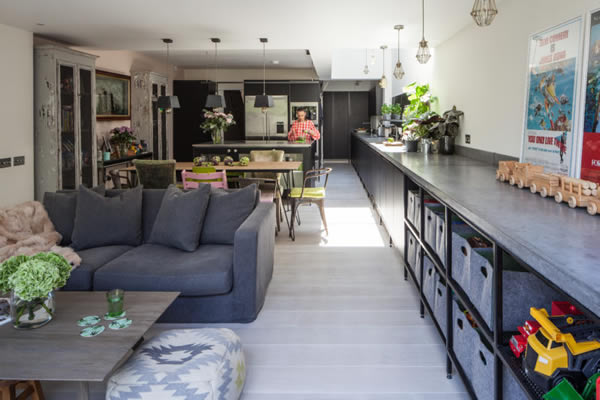 Minimalist framework does not detract from the interior aesthetics

In specifying Glazing Vision’s Flushglaze rooflight, Brown ensured that the product would complement the modern aesthetics of the new extension. The minimalist internal framework would enhance the feeling of loft and airiness, whilst its slate grey finish would subtly coordinate with the anthracite kitchen cabinetry below.

The rooflight is split into 3 sections and the architect was able to position decorative lights directly beneath the joints in the glass. These lights illuminate the kitchen when the family is cooking in the evening hours, and also help to create a warm ambience in the rest of the extension.

Where the dark tones and industrial finishes of the kitchen surfaces, and the moody, eclectic mix of furniture and materials in the lounge/diner could have compromised the light quality, this generously-sized Flushglaze fixed rooflight from Glazing Vision has ensured that the natural light absolutely floods in to the extension during the day. It is a bright, welcoming space, and has become the central hub of this family home. 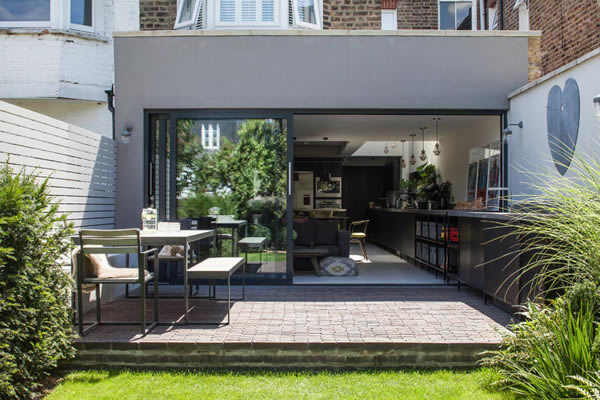 Glazing Summit to tackle the big questions around sustainability
Although tackling climate change has been moving up the agenda for some time, it is now taking centre-stage as the world moves to a sustainable future.
Vitro Case Study: FIVE City Center
Five City Center in Allentown, PA features an attractive blue and gray mosaic-style façade that incorporates five different Vitro glass products.
Introducing Saflex® Crystal Clear PVB interlayer for low-iron glass
Give your design something it never had before: a laminated glass so clear it almost disappears.
Dubai hosts over 36,000 global professionals at the first in person construction event in two years
36,386 business professionals attended Dubai’s construction mega-event The Big 5, returning as the only live in-person event connecting the global construction industry in 2021.
Over 75% of space allocated for FIT Show 2022
FIT Show organisers have confirmed that over 75% of space has now been allocated for its new May 10 - 12, 2022 dates.
Escalating supply chain crisis to top Glazing Summit agenda
The glazing industry has lurched from one crisis to another, from the impact of lockdown to the floodgates opening to an under-prepared industry.
NorthGlass, Guinness World Records Maker
NorthGlass has created the Guinness World Records for the largest single glass window.
Glass for Europe releases a new video on daylight benefits
The benefits delivered by large glazed surface are more than we think. They provide access to natural daylight and a visual connection with the external environment.
Registration for FIT Show’s virtual CPD learning programme is now LIVE!
Organisers of the UK’s flagship event for the fenestration industry have curated two days of content that will be available on Monday 27th and Tuesday 28th September.
Vitro Architectural Glass showcases innovative, sustainable products at GlassBuild America 2021
Vitro Architectural Glass will be showcasing several new products and innovative technologies at GlassBuild America.
The spectacular glass combinations for large building projects by Tvitec
Discover more about how Tvitec’s glass solutions fit magnificently with other materials and claddings for projects headed by renowned international architects.
Arkay Windows latest Glazing Summit 2021 sponsor
Arkay Windows Limited is the latest industry name to come on board for this year’s Glazing Summit.