The new Grand Canyon Skywalk, the U-shaped glass bridge suspended 4,000 feet above the Colorado River, makes it possible for the first time for visitors to take in incomparable views of the western edge of the Grand Canyon.

What makes this engineering marvel possible is the durable and ultra-clear glass that was designed and produced by Saint-Gobain, the world’s leader in glass technology for more than 300 years.

The company’s expertise in glass is recognized throughout the world, evidenced first by its creation in 1682 of the spectacular Hall of Mirrors at the Palace of Versailles in Paris. More recently, Saint-Gobain designed and manufactured the glass in the “Pyramid” of the Louvre, featured prominently in the hit movie The Da Vinci Code.

Saint-Gobain – which employs 24,000 people in the United States, many of them through its building materials subsidiary CertainTeed – manufactured the low-iron Diamant® glass for the floor of the Skywalk at its Cologne, Germany, plant. It was processed into laminated glass at three of its European subsidiaries. The deck, approximately 10 feet wide and 70 feet deep, is made of laminated tempered glass more than two inches thick, produced in 46 pieces that were shipped directly to the western edge of the canyon. Each piece of glass is held in place by connectors specifically designed by Saint-Gobain for the bridge. The floor glass includes a structural interlayer of DuPont SentryGlas® Plus for optical clarity and strength.

According to Roger Watson of Saint-Gobain Glass Exprover, the business which oversees architectural glass export to nations throughout the globe, the Diamant glass in the Skywalk contains a significantly lower amount of iron oxide than regular glass, which means that it is exceptionally clear, appearing virtually invisible to visitors and giving them a completely unobstructed view of the natural wonder.

The glass deck is supported by outer and inner steel beams anchored into solid stone in the wall of the Grand Canyon. The Skywalk is said to support approximately 100 pounds per square foot, can withstand an 8.0 magnitude earthquake, and 100 mph winds.

Tecglass: Unique, Sophisticated and Creative Facade in the City of Pune
FG Glass brought its imagination to life with the collaboration of Tecglass technology.
A+W on the path to Industry 4.0
A+W SmartFactory controls high-tech glass production
Safely experience the difference of the glass floors in decoration
Yorglass' anti-slip floor glass series carry the quality and aesthetic appearance of the glass to the spaces.
British Glass welcomes Matthew Demmon as new president
Managing Director of MKD32 Matthew Demmon has become the new president of British Glass after a unanimous vote at the company’s Annual General Meeting.
Saint-Gobain Hasselt uses LineScanner for glass quality control
High-quality glazing requires high-quality systems for the quality control of glass.
Three-part Saflex® Structural PVB webinars in September
Join us September 10, 17, and 24 for our three-part webinar series on Saflex® Structural PVB interlayers for glass, featuring Eastman’s own Wim Stevels! 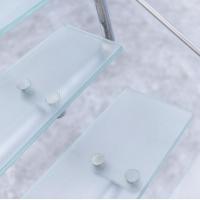 4 projects where laminated glass is essential