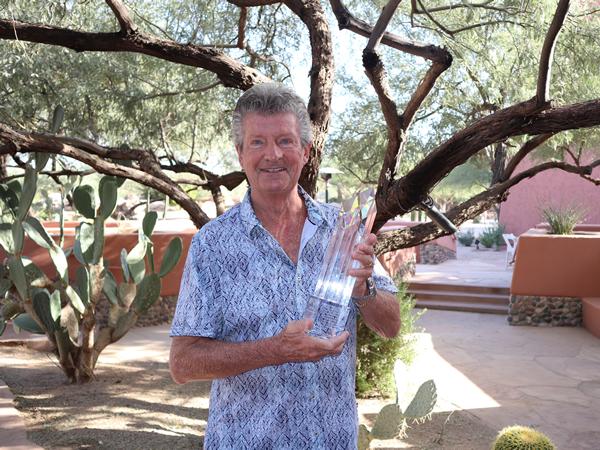 The Fenestration and Glazing Industry Alliance is pleased to announce Georges Thiret (Graham Architectural Products) as the recipient of the first-ever FGIA Lifetime Achievement Award.

This prestigious award recognizes an individual who has dedicated significant resources throughout the majority of his industry career to guiding and achieving the strategic objectives of the organization and who is distinguished in thought leadership, extensive contributions, vision and impact relative to the organization and the industry.

Thiret was recognized during the 2021 FGIA Hybrid Fall Conference in Phoenix, AZ. The industry peers who nominated him described Thiret as a consistent, active leader since the early 1980s within what was formerly the American Architectural Manufacturers Association (AAMA), and now FGIA.

“It’s hard to say goodbye. I want to thank everyone for their support. This has been a great ride. I’ve been involved since 1978. I’ve been proud to be Chairman twice, I’ve been on the board for a long time. Now it’s time to make room for the younger, smarter, stronger. And I know this industry right now is producing those individuals. And this industry is very healthy,” said Thiret, now a consultant for Graham.

Thiret has held a multitude of leadership roles within the organization, including serving two separate terms as Chairman of the Board, and he was the 1998 recipient of the Outstanding Member Award. Having served for many years as the Chair of the Sites Committee, he is credited with evolving AAMA events into some of the most well-renowned gatherings in the industry.

“Georges has been significantly influential in AAMA's evolution, culminating in the unification with IGMA to form FGIA,” said Janice Yglesias, FGIA Executive Director. “The Association is proud to present him with this award, which serves as a well-deserved tribute to a wonderful person and member.”

Thiret was a leader in advocating for material-neutrality within the North American Fenestration Standard (NAFS) and for its harmonization between the U.S. and Canada. He also served as a key driving force behind bringing supplier companies and vinyl materials interests into the Association, the latter of which was the catalyst for the AAMA Profile Certification Program.

“Georges’ industry contributions and influence extend well beyond the association world. He was instrumental in evolving Graham into a leading commercial fenestration products company,” said Steve Fronek, Vice President of Preconstruction at Apogee Enterprises and longtime FGIA board member. “Additionally, he was a pioneer of accessible operable windows in public schools. He has served as a collaborative voice, bridging technical and marketing expertise, and steadily encouraging strong industry relationships.”

A presence who influenced many colleagues to become active industry leaders, former Graham employees describe him as an excellent leader and strategist who was well-liked, respected and trusted by his team. Thiret has been with Graham since the late 1980s.

“By regularly encouraging collaborative work with other industry organizations, Georges helped build our association into the highly influential and credible entity that it is today,” said Yglesias.

Antonio Ortega, CEO of Turomas, awarded as the best manager of Teruel by ADEA
Antonio Ortega, won the award for the best manager in Teruel in the XII Edition of the ADEA Awards.
Şişecam Came Together with the Sector Professional in Zak World of Façades Conference - Istanbul
Şişecam has attended Zak World of Facades Conference - Istanbul event which was held for the first time in Turkey.
Nominate Candidates for Jorma Vitkala Award of Merit!
GPD 2021 was postponed because of the COVID-19 to February 16. - 18. 2022. Due to the 8-month delay, we have reopened the JVAM Award nomination candidate form until January 10, 2022.
Thirsty Thursday: Standards for Laminated Glass with Julia Schimmelpenningh
Sign up for a free webinar with National Glass Association (NGA) on December 9th, 2021 from 1:00-1:30 pm ET. We will be discussing standards for laminated glass.
FLACHGLAS Wernberg: Innovations thanks to A+W Software
FLACHGLAS Wernberg is completely fit for the future with its new A+W software solution
Join Vitro this December for our final Continuing Education opportunities of 2021
Looking for a convenient, engaging way to complete your annual CE credits in the middle of the busy holiday season? Vitro’s Glass Education Insider webinar series can help you finish your requirements with four virtual sessions in December.
ICG 2022 Abstract submission
Still time for submitting abstracts for papers for the ICG 2022 conference in Germany organised by DGG: deadline is December 15.
Buy Five, Get One Free | Group Discounts Available for FenestrationMasters
As companies plan their finances and goals for the coming year, now is the ideal time to consider room in training budgets for the FGIA FenestrationMasters® Professional Certification Program.
PMI Day 2021: once again Mappi invests in the future, invests in knowledge and sharing
On Friday, November 19th, Mappi opened its doors to high school students.
Thermoseal Group Wins G21 Best Component Supplier Award
At the Glass and Glazing Industry’s prestigious G21 event at the Hilton on Park Lane on 26th November, the Thermoseal Group team were presented with the ‘Best Component Supplier’ Award.
Renaud Schmitt Rejoins A+W Software
Renaud Schmitt rejoins the A+W Software team as a Cantor Customer Support Specialist.
Sutton Named Product Manager for Value Added Products
Vitro Architectural Glass announced that Daniel Sutton has been named product manager for value added products at Vitro Glass.