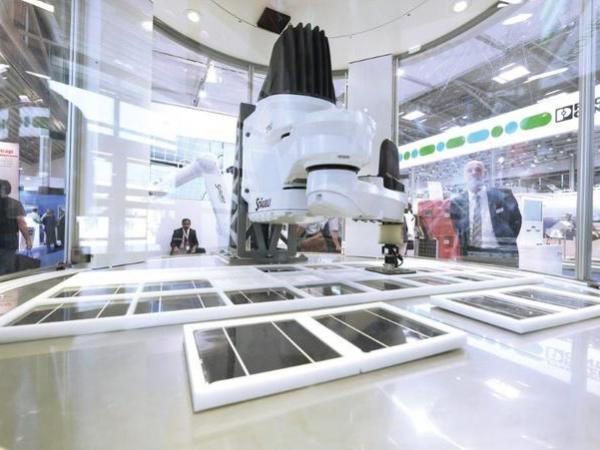 And the parallel event automatica, the leading exhibition for smart automation and robotics, will also focus on this topic. From June 20-22, Munich will thus become the essential innovation showcase for the industry.

The trend is clear - there is a massive reduction in power generation costs for renewable energies. The International Renewable Energy Agency (IRENA) estimates that by 2020, the price of generating power at large-scale solar power stations could drop to roughly three US cents per kWh in many regions around the world.

PV manufacturers in Asia are taking the lead with investments in modern production plants and are in need of high-grade equipment. A current example is the Chinese PV company Risen Energy, which began production of solar cells and modules in Changzhou in early 2018.

Five GW are expected to roll off the new factory's assembly line each year. According to the industry association German Engineering Federation (VDMA), German PV suppliers are also profiting from the Asian production boom. In recent times East Asia has accounted for a large portion of their export quota, amounting to 87 percent, and German-engineered PV production equipment continues to be in demand.

Order volumes have increased in particular for PERC and black silicon systems with crystalline silicon as well as thin-film technology, reflecting the rising demand for highly efficient cells. Thin-film modules and in particular CIGS (copper-indium-gallium-selenide) cells are increasingly also being used as façade elements.

For building-integrated photovoltaics, the boom lies ahead - beginning in 2020, all new non-residential buildings in the EU must be "nearly zero-energy buildings," likely leading to increased use of thin-film solar cells on façades.

The dynamic development of PV production technologies is one of the current special focuses of the solar industry. In keeping with this, Intersolar Europe will be addressing the subject in close partnership with the VDMA, during the Intersolar Europe Conference and the accompanying program as well as the exhibition itself.

For instance, a tailored workshop on June 21, 2018 will offer an in-depth insight into current developments and issues. The event examines the significant challenges facing PV equipment manufacturers in light of global competition.

Dr. Jutta Trube, Managing Director of VDMA Photovoltaic Equipment and leader of the workshop, will explain developments using the latest figures from the "International Technology Roadmap for Photovoltaics (ITRPV)," which is published regularly by the industry association.

The roadmap is recognized by the industry as a PV guide for manufacturers and suppliers. "Prices for crystalline silicon continue to fall and the efficiency of solar cells is improving - things will change in the coming years for wafer and module manufacturers and also for suppliers. We want to explore this and offer an outlook for the next ten years," says Jutta Trube.

The accompanying Intersolar Europe Conference also focuses on the innovations in the area of PV production technologies. The session "PV Manufacturing: Cell & Module Technology Advancements," on Wednesday June 20, 2018 at 9:00am, will discuss production technologies for the manufacture of efficient cells and modules.

The session "PV Manufacturing: R&D - What's in the Lab", on June 20, 2018 at 11:00am, offers a chance to think outside the box by exploring promising production technologies for the future.

In the presentation series "Manufacturing PV in Europe: A Quest for Innovation and Quality," the speakers will discuss how the European PV production market can come to counterbalance Asia's leading position in the field of manufacturing technology.

The session is organized by the European research organizations ETIP PV and EUREC and the manufacturers' association Solarunited.

INTERSOLAR EUROPE AND AUTOMATICA: CREATING SYNERGIES THROUGH A UNIQUE COMBINATION

In 2018, Intersolar Europe is particularly appealing for the industry. As the world's leading exhibition for the solar industry, it takes a close look at the developments and innovations in the large-scale production of ingots, wafers, cells and modules, and much more.

This year the event automatica will take place at the same time, creating another production industry hot spot and providing comprehensive information about the future of automated production.

Uniting Intersolar Europe with this leading exhibition for smart automation and robotics creates an intersection between two worlds, and pools the know-how of two future-oriented industries.

Wiegand-Glas in Schleusingen puts furnace 2 into operation
The new end fired furnace, which produces container glass in the colours amber and green, was finally successfully commissioned at the end of the first quarter of 2022.
Fensterbau Frontale & Holz-Handwerk 2022 as „Summer Edition“
FENSTERBAU FRONTALE and HOLZ-HANDWERK exhibition is back at Exhibition Centre Nuremberg as a one-off “summer edition” from 12-15 July 2022.
Şişecam 37th International Glass Conference
Şişecam 37th International Glass Conference will provide a fantastic opportunity for all participants to discuss and shape the future of glass together and to greet “International Year of Glass 2022”.
glasstec 2022: Foresight. Sustainable architecture with glass
International Architecture Congress on 22 September 2022
GlassBuild America 2022 Registration is Open
The largest glass and fenestration industry trade show in the Western Hemisphere returns to Las Vegas this fall
Okalux: Façade mix on campus
Part of the concept is the Abercrombie Building with its dynamic façade of concrete panels and glass, partly complemented by OKAWOOD insulating glass with Functional Timber Grid.