Back to the Future Works for Columbia Science Building 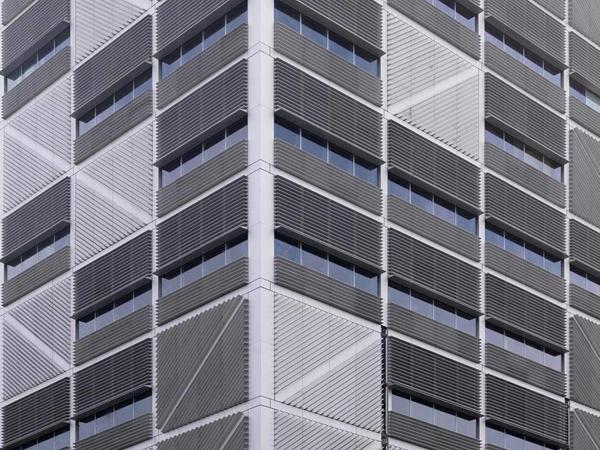 The glaziers and engineers at W&W Glass determined that that a Sotawall® HYBRID-WALL® unitized curtain wall system with integrated Zahner custom louvered metal panels would be the best solution.

Sometimes looking to the past helps provide insight into the right solution. This especially applies when old buildings are in the way.

Columbia University recognized they had a need for additional space for scientific instruction and research facilities on its Morningside Campus at 120th and Broadway.

The answer for the University meant building a new, modern building that would house 21 cutting-edge laboratories for researchers in biology, chemistry, physics, and engineering.

The labs were planned to maximize flexibility and have the ability to house vibration-sensitive equipment for the revolutionary work being performed there.

Due to the construction that was taking place at the Manhattanville Campus to the north, the new building would also provide a link to the old campus for pedestrian traffic.

The final design for the new science building has its origins in the historic campus plan designed by McKim, Mead and White for Columbia University in 1897.

The new facility houses communal research facilities for both biological sciences and nanotechnology including cold rooms, sterilizing rooms, and clean rooms. It also has a library, lecture hall, and café.

On the surface, this would not seem like a complicated project. It is a 14-story structure holding seven research laboratory floors, an integrated science library, and a medium-sized 164 seat lecture hall. But this project has a couple of significant twists.

The principal design challenge was to develop fluid connections between street traffic and the campus. However, the campus is  located 30 feet higher up from the street on a building site dominated by the presence of an existing structure, the Francis S. Levien Gymnasium.

The majority of the new building actually needed to cantilever over topof the gym, leaving only about 65-square feet of space available to fit elevators, mechanical systems, complex steel connections at the base.

Moneo decided the entire east face should be entirely glass, with the exception of its connection with Pupin Hall, where louvered aluminum panels are used. This arrangement displays the indoor activity to the rest of the campus, an effect that the architect compared to a beehive.

The lab side of the building on the west (on the street facing side) features diagonally louvered opaque panels, dispersed with intermittent horizontal glass curtain wall banding shaded by aluminum louvers from late day sun. This area is more private for laboratory activities and equipment.

There is also a pocket of curtain wall wrapping the upper corner as it turns to the north to help accent the metal-heavy facade.

The podium area features a stone base for contrast. The double-story curtain wall at the cafe on the north elevation brings plenty of light in without the need for shading devices due to its orientation.

Moneo’s cladding concept for the facade is integrally linked to the building’s structural steel system. The structure is designed as one giant truss with both internal and external diagonal bracing elements.

Many members were spaced out to allow less interruptions within the lab spaces. This required large amount of steel towards the exterior of the building.

There would be a delicate balance of metal and glass required to expose or conceal these members. The outer appearance needed to be inviting to the general public, but enclosed enough to foster innovation between researchers and students.

This composition speaks both to the artist and the engineer. The architect of record Davis Brody Bond and Turner Construction needed to work with an expert to make sure the elements could be seamlessly incorporated into high-performance, weather-tight assemblies so they turned to W&W Glass.

The glaziers and engineers at W&W Glass determined that that a Sotawall® HYBRID-WALL® unitized curtain wall system with integrated Zahner custom louvered metal panels would be the best solution.

Sotawall® was chosen for their experience in the pre-glazed, unitized curtain wall fabrication business. Zahner was the natural choice for their technology and design flexibility in precision metal cladding system fabrication.

The distinguishing feature of Sotawall® HYBRID-WALL® is its ability to install between floor slabs like that of a standard window wall, while maintaining the superior performance of a pre-glazed, unitized curtain wall.

This allowed the system to be installed with greater adjustment tolerances using field drilled anchors in lieu of embeds in concrete. It also kept the stand-off distance from the building slabs to a minimum with notched out mullions in the spandrel areas.

The shop-fabricated system was instrumental to make sure all of the anchor points for the louvered panels were shop applied before coming out to the job site.

Turner had to carefully coordinate trucking deliveries to a tight job site and installation in intricate three-day work cycles with two rigs suspended from the roof chasing each other around the building for W&W’s ironworkers to anchor the system into place. This process took six months to complete the facade.

LEED® (Leadership in Energy and Environmental Design) certification provides third-party verification that a building or community has been designed and built to meet key areas of environmental and human health, including energy efficiency, materials selection, and water savings.

This LEED® Gold certification is particularly noteworthy due to the large number of laboratories in the 14-story building.

600450
www.wwglass.com
Back to the Future Works for Columbia Science Building glassonweb.com

FGIA Cancels 2020 IG Fabricators Workshop, Plans to Release Online Video Series
Due to the continued health concerns related to COVID-19, the Fenestration and Glazing Industry Alliance has cancelled the Insulating Glass (IG) Fabricators Workshop, previously scheduled to take place November 10-12 in Plano, TX.
Polflam Project: Knauf Office, Warsaw
The fire-resistant glazing in the frameless system POLFLAM® BR, classified as EI 60. POLFLAM® glass, was also used for the fire-resistant doors in the staircases and is a definitive architectural feature of the building.
Sphinx Glass: We have changed our product names
Sphinx Glass changed the names of their Tint range, they will now be known as ISOLITE. As well as their Clear glass, which will be known as TRULITE, with all of its known automotive, silvering, and architectural qualities.
Guardian Glass Project: Black Pearl
The concrete’s dark tint highlights the transparency of the 6,000 sqms of Guardian SunGuard SN 51/28 used in the project’s generous glazed curtain wall.
NGA Announces Winter Glass Conference Transition to Online Event
Conference to shift to one-day gathering on February 9, 2021.
Vitro Glass updates popular Glass Design Handbook
Pocket-sized design resource offers up-to-date information on designing with glass

Sphinx Glass: We have changed our product names