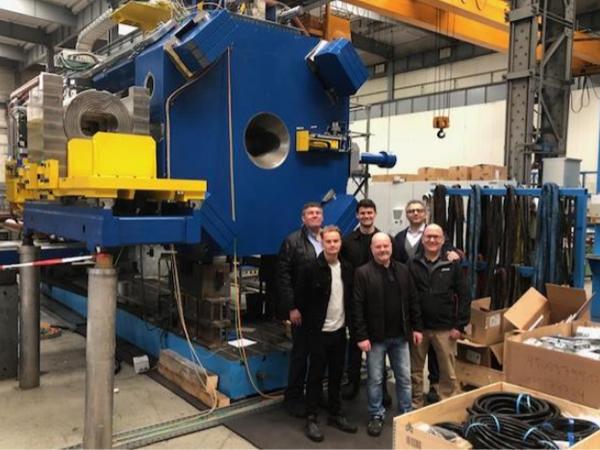 Today sees the delivery of perhaps one of the East Midlands’ largest single private investments over the last few years.

A state-of-the-art aluminium extrusion press ordered by Garner Aluminium Extrusions, trading as Garnalex, has been making its way down the M1 motorway this morning with a police escort.

The route for the specialised heavy haulage took the machinery via Ripley to its new temporary home at The Firs Works in Heage, travelling past the historic Heage Windmill. The photograph shows the striking contrast of old and new technology side by side, in an area already rich with innovation in manufacturing.

The total investment in Garnalex is £9m to date, including the delivery of the aluminium press, and is planned to increase further over the summer. The main body of the machine itself has a weight of 170 tons, and the machine is so large it has to be assembled on site by technicians from the manufacturer’s facility in Germany. Trading at Garnalex is due to commence when the equipment is commissioned during August.

Garnalex has been formed by Roger Hartshorn, who is well known in the industry, having been involved with HL Plastics for over 42 years. He was one of the founders of Eurocell PLC, more recently going on to develop the successful Liniar window system and associated product ranges with his team.

Mr Hartshorn retains excellent links with both companies and intends to further develop this relationship by supplying aluminium extrusions to them, amongst others. Remarkably, the companies he has started now employ over 2,000 people in Amber Valley area.

The new business, Garnalex, already employs 5 full time directors, all of whom are experienced within the industry, to lay the foundations and controls for this exciting new business venture. There is planned further recruitment over the summer as the equipment approaches completion, with employees expected to reach 35 by the end of the year.

Mr Hartshorn says, “Garnalex is a really exciting new business and this initial investment is just the start of the journey. The aluminium extrusion service will initially supply local companies and then eventually branch out into our own range of products. In 2018 the UK consumed 190,000 tons of aluminium extrusions, but only 110,000 tons of this was produced in the UK. The huge benefit we will have is speed of response to supply customers from a UK source from the highest quality with latest technology SMS low energy plant, into an industry and a customer base that we have supplied for over 30 years.

“In line with my continued philosophy, we have exciting plans for further investment in premises, equipment and plant to further develop the new business.

“I’m excited with the prospects of Garnalex. The Amber Valley region in particular is already a successful location for innovation and development in manufacturing and we’ve been lucky enough to attract some of the best people in the area to join the team.”

There remains less than 1ha of land within the estate but there is still a huge demand from local companies who wish to expand within the site. Garner Holdings is in the process of applying to the local authority to develop a second phase of the estate in order to supply that need with an additional 19ha of purpose-built industrial units. The application proposes to build new bespoke facilities for HL Plastics, Manthorpe Engineering, Garnalex and LB Plastics.

Planning permission was recently granted to develop the Firs Works industrial land for 175 residential units. This brownfield site will become available once a new employment site has been sought for the business to relocate to, preferably at the Denby Hall Business Park.

British Glass response to government price cap on energy bills
British Glass welcomes the announcement from government to cap energy prices and assist businesses, including the glass industry, with the ongoing energy crisis for an initial six months.
FIT Show sponsors Glazing Summit
The FIT Show is the latest industry name to sponsor this year’s Glazing Summit.
Thermoseal exhibits at Glasstec
Thermoseal Group invites all customers and industry contacts to our highly anticipated after-show party, hosted at the Thermobar on Wednesday 21st September 2022 at McLaughlin’s Irish Pub in Alstadt.
Glazing Summit sees 50% of tickets sold in last seven days
Momentum has gone into overdrive for the Glazing Summit, with organisers revealing that, at the time of writing, 50% of the tickets sold were in the last seven days alone.
British Glass comment on the energy update of 8 September 2022
British Glass welcomes the recognition from the UK Government that radical action is required to mitigate the spiralling costs of energy that threaten businesses in the UK.
British Glass CEO gives evidence to government inquiry on energy
British Glass CEO Dave Dalton has today (6 September) given evidence to BEIS’ inquiry on how businesses and workers are reacting to the cost-of-living crisis.

Is your office ventilation smart?