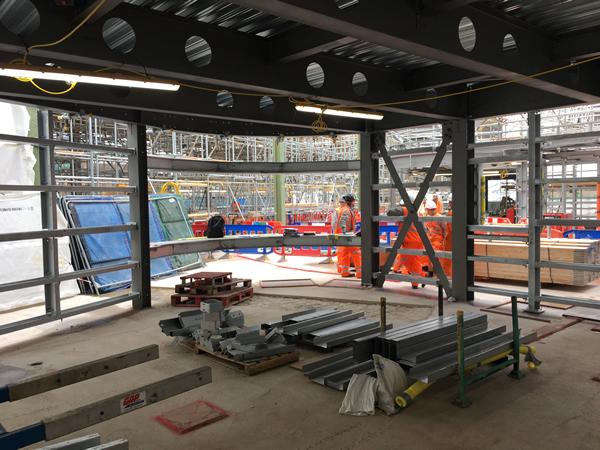 We’ve added to our transport portfolio by supplying a range of systems for five new Crossrail stations.

We’re supplying to Bond Street, Farringdon, Liverpool Street, Whitechapel and Woolwich stations on what will become the Elizabeth Line.

The line is expected to fully open at the end of 2018 and will increase London’s rail capacity by 10% when it is fully operational.

The £14.8 billion Elizabeth Line will have 40 stations, including ten new stations, with up to 24 trains running each hour in both directions on its 100 kilometre route.

In Whitechapel station, pictured, We have been contracted by Kilnbridge to fabricate, supply and install a range of curtain wall screens for the station’s new ticket hall on its mezzanine level.

Building work on the new station, which first opened in 1876 and now has over seven million users per year, has been complicated by its importance as an interchange for both the Hammersmith & City and District lines and the London Overground.

Wrightstyle has completed a number of recent prestigious transportation projects, both in the UK and internationally, including a major railway hub in Hong Kong and the iconic frontage of London’s King’s Cross station.

We’ve become an international leader in the supply of guaranteed systems to mitigate against fire or ballistic or bomb attack – and has live tested our systems against both car and lorry bomb attack.

Wrightstyle is also a major supplier to airports around the world, including several in the UK, with our systems providing a high level of protection against a range of threats.

“Crossrail is the largest construction project in Europe and has been designed to provide passengers with the safest-possible travelling environment,” said John Woodcock, our contracts manager.

“That’s why our systems have been specified across the new line because we have enormous experience in the sector, and our international testing regime provides absolute assurance on the strength and compatibility of both our glazed and framing components,” he said.

Advancements in Structural Glass & Glass Facades | WORKSHOP – SESSION 2A
Do not miss this opportunity! Register for the August 13th Facade Tectonics session (12-2pm) on Advancements in Structural Glass & Glass Facades.
A dialogue of history with modernity – the facade of the PURO hotel in Warsaw glazed with Guardian Glass
The use of low-iron UltraClear™ Guardian glass made the project look light and transparent.
Şişecam presents webinar series on Designing for a New World – Post COVID-19 powered by Architect and Interiors India
The fourth episode of the webinar series will see a discussion on the many facets of glass and its use in the architectural and design realm.
Trex Commercial Products: Perimeter Mall – Renovation
Trex Commercial Products provided more than 1,100 lf of Track Rail along the interior stairs and common area balcony overlooks in the multi-phase transformation of Atlanta’s Perimeter Mall.
NorthGlass SiNest Yield Unusually Brilliant Results Again in Zhengzhou Construction Expo
On July 28, China (Zhengzhou) Prefabricated Building And Green Building Technology Expo opened in Zhengzhou International Convention & Exhibition Centre.
NorthGlass Glass Louvres Decorate KIA Visual Plaza
The building is a square structure with 16,900 pieces of SGP colored glazed laminated louver glass on the facade.