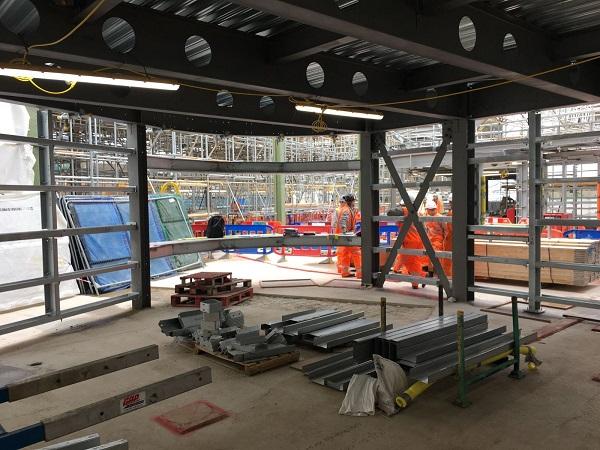 Wrightstyle, the advanced steel and aluminium glazing company, has been appointed to work on a sixth Crossrail station.

The contract at Paddington station will see the company fabricate bonded doors and blast-rated screens for Craft Interior.

Devizes-based Wrightstyle is also supplying a range of blast and fire-rated doors, screens and curtain walling to Bond Street, Farringdon, Liverpool Street, Whitechapel and Woolwich stations on what will become the Elizabeth Line.

The line is expected to fully open at the end of 2018 and will increase London’s rail capacity by 10% when it is fully operational.

The £14.8 billion Elizabeth Line will have 40 stations, including ten new stations, with up to 24 trains running each hour in both directions on its 100 kilometre route.

Wrightstyle has completed a number of recent prestigious transportation projects, both in the UK and internationally, including a major railway hub in Hong Kong, the Dubai metro and the iconic frontage of London’s King’s Cross station.

The company is an international leader in the supply of guaranteed systems to mitigate against fire or ballistic or bomb attack – and has live tested its systems against both car and lorry bomb attack.

Wrightstyle is also a major supplier to airports around the world, including several in the UK, with its systems providing a high level of protection against a range of threats.

“Crossrail is the largest construction project in Europe and our appointment to a sixth station underlines how designers are building in the highest-possible levels of safety,” said John Woodcock, contracts manager, Wrightstyle.

“We have worldwide experience in the sector, and our international testing regime provides absolute assurance on the strength and compatibility of both our glazed and framing components,” he said.

Glass Futures Ltd presents Glass Futures Open Design Events
Glass Futures opens a virtual door to it Global Centre of Excellence - be part of our open design sessions.
Trosifol interlayers were specified by MonoSol for two glazing applications
Inside and out, interlayers from Trosifol prove their capabilities in structural and aesthetic applications... both sides of the Atlantic.
FIT Show organisers announce new September 2021 dates
FIT Show organisers have announced new dates for its 2021 event, postponing the fenestration industry’s flagship UK event from May until September 2021.
NorthGlass: A window of Lujiazui showing the masterpiece of world art
The super-large glasses of the architectural complex are built by Tianjin NorthGlass.
Solarban® 90 glass adds drama, performance to Westin Irving Convention Center Hotel
As BOKA Powell evaluated their options based on performance, aesthetics, availability and cost, Solarban® 90 glass emerged as the most suitable glass system for the hotel.
British Glass welcomes Matthew Demmon as new president
Managing Director of MKD32 Matthew Demmon has become the new president of British Glass after a unanimous vote at the company’s Annual General Meeting.