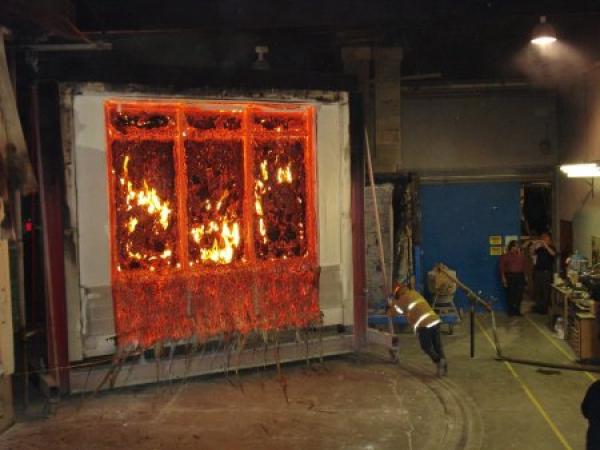 Photo source
Wrightstyle
Wrightstyle is a specialist steel and aluminium glazing company and supplies its fire-rated systems internationally. Jane Embury, the company’s marketing director, looks at the impact of arson.

It’s a safety campaign that you may be unaware of, although it highlights a very real problem.

Arson Awareness Week (21 – 27 March) is designed to focus minds on a crime that deserves much greater attention. Because, according to the Arson Prevention Forum, some 70,000 fires are set deliberately every year in the UK.

Nearly 50% of those fires are attended by the Fire Service, and the total cost of fire insurance claims stands at some £1b per year.

The Forum also points out that arson accounts for almost half of all fire and rescue call-outs, and that it can have the most appalling consequences. In 2014/15, 50 people died in fires that were started deliberately.

Arsonists tend to be young men – although they can be from any social background or age group, or either sex. The peak age for offending is between 14- and 16-years-old.

The reasons arsonists give for their behaviour is also diverse. Some fires are set as an insurance fraud. Other fires are started simply for the thrill, or for revenge. Some arsonists have mental health issues.

Most deliberate fires are started at night, although not always – particularly in commercial or industrial premises. In the latter, areas such as storerooms or warehouses provide both cover for the arsonist and, importantly, stored materials to fuel the blaze.

The Arson Prevention Forum has ten recommendations for preventing arson or its consequences, and advises everyone to be aware of the risks.

That starts with a sensible fire risk assessment, looking at every aspect of the business, not least how materials are stored to what fire precautions are in place.

The Forum makes the good point that many companies targeted by arson attack go out of business – so having a plan of action should be front of mind for every business owner.

But if a fire breaks out, it doesn’t immediately matter if it was started deliberately or not. The important thing is to get everybody in that building to safety. The fire risk assessment should, of course, have addressed each issue in the evacuation process.

For example, occupants in a building should generally be able to escape away from the fire. That means having escape routes protected by fire-resistant materials or self-closing fire doors. It also means recognising that fire travels upwards, so that stairways must also be protected.

It also means having exit doors that open outwards to make escape easier and, if there are large numbers of people, minimising the crush risk. (Exterior fire doors should also be checked to ensure that obstructions, such as bulk deliveries, aren’t cluttering them up).

Where possible, it means making escape routes as short as possible, with clear signage, and building in planned (and rehearsed) contingencies for evacuating the elderly or infirm. It also means planning for electricity failure and how to evacuate people in darkness.

At Wrightstyle, our business is about managing fire risk. Our systems stop fire, smoke and toxic gases from spreading for up to 120 minutes - minimising fire damage and allowing occupants to escape.

In a real fire situation, the glass will only be as protective as its frame, and vice versa. Specify each component separately, and you run the risk of one failing – and therefore the whole fire protective barrier failing.

It’s not a subject that we like to think about, but it’s a surprisingly common crime that can, and does, devastate lives and livelihoods.

Arson Awareness Week is maybe something we should all think about, at all times of the year.

FIT Show set for Fensterbau
FIT Show, the UK’s only dedicated event for the glass and glazing industry, will form part of the GGF UK Pavilion (Hall 4A, Stan 305) at Fensterbau Frontale (18 - 21 March, 2020).
LV Osaka sets sail, NorthGlass creates another brilliant future in Japan!
The internal and external curtain walls are all made by Tianjin NorthGlass.
Thermoseal Group Now Supplies IG Components to 48 Countries in 5 Continents
The demand for more energy efficient insulated glass (IG) components has been growing worldwide with the global drive for more energy efficient buildings.
Have your say at Glazing Summit 2020
Visitors to this year’s Glazing Summit will again be able to have their say on the issues that matter.
181 Fremont Tower, with Vitro Glass, named San Francisco’s top building of decade
San Francisco Chronicle calls engineering marvel “the people’s choice”.
Spacer Bars, Document L, Energy Efficiency and Triple Glazing
Thermoseal Group, the UK’s leading manufacturer and supplier of the largest volume of spacer bars for insulated glass (IG) sealed unit production, gives an insight into the spacer bar market and predicted future trends.