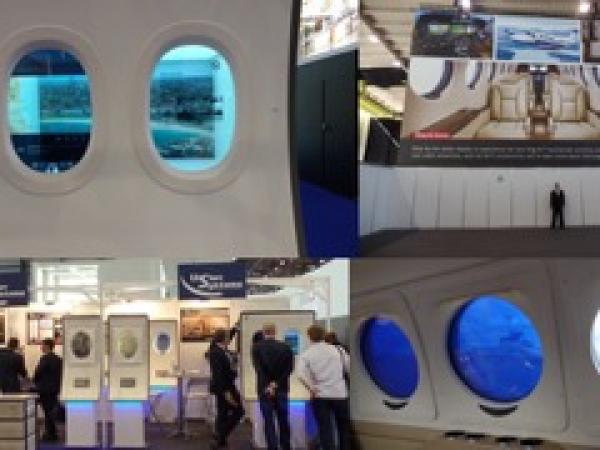 At the May 24-26 EBACE aircraft show in Geneva, the growing use of an SPD-Smart EDW system is taking a leading role in improving the passenger experience in ways that go beyond just shading.

Previously, the passenger experience focused on connectivity, content, in-flight entertainment (IFE) and devices. Now that those areas have been addressed, it is recognized that improving the passenger experience should now focus on airlines, designers and aircraft manufacturers providing for a more comfortable environment -- a cabin where excessive light and glare is managed, is quieter, and cooler. This environment also improves the work or entertainment experience. For example, a device used for work or entertainment, such as a laptop, can be better viewed when light and glare is managed.

New SPD-Smart EDW system innovations have now been introduced to meet this need, and have resulted in an even more enhanced passenger experience with innovative new products shown at EBACE by various licensees of Research Frontiers (NASDAQ: REFR).

When first introduced, SPD-Smart EDWs were the most advanced form of light-control the aerospace industry had ever seen, yet they were simple shading devices that allowed passengers to press a button and instantly change the tint of their windows. Now, light and glare control has become more sophisticated through the use of more intelligent and automated control systems and other features, new materials have resulted a quieter cabin that is also cooler while on the ramp, while passengers are boarding, and in flight.

This is particularly important now due to many new aircraft and aircraft interior design features. For example, larger windows on aircraft allow passengers to feel more connected with the outside environment and enhance the feeling of comfortable spaciousness. But with larger windows comes a far greater need to control solar heat gain from sunlight coming into the cabin.

SPD-Smart EDWs can block up to 99.95% of visible light. Part of enhancing the passenger experience also comes from improvements to in-flight entertainment systems and the rise of bring-your-own-device entertainment systems on modern aircraft. SPD-Smart EDWs not only block light and heat from entering the cabin, they also reduce glare so people can see what is on their video screens better, and also reduce the noise level coming through the passenger window by 10 decibels, which further enhances passenger enjoyment and comfort.

SPD-Smart EDW systems have been featured on jets, helicopters and turboprop aircraft, and they offer an effective, elegant and unique solution to improving how passengers feel while in flight. These benefits do not stop with the passenger. Flight crews can have easier central control over all windows in the aircraft cabin, and in the cockpit, pilots benefit from sun visors and side windows that reduce heat and glare while preserving visual acuity.

Now aircraft manufacturers and their suppliers have taken these basic benefits of SPD-Smart EDWs and built upon them with innovative new features. Easier control switches from InspecTech Aero Service were shown on the two newly redesigned King Air 350i and 250 that were on display by Textron at EBACE. In their announcement at EBACE that the King Air C90GTx (the third King Air to offer SPD-Smart EDWs as standard equipment) has received FAA certification, Textron highlighted the improved EDWs on their new aircraft as an important cabin enhancement: "Cabin Upgrades:…The cabin now offers an enhanced passenger experience…Also standard on all three models are electronically dimmable window shades, offering a simple interface that provides clearer views and darker shading at the touch of a button."

Vision Systems also debuted an Acti-Vision aircraft window that not only dims, but brings the passenger important information such as flight status, moving map, satellite imagery, and even tourist information about what the passenger is looking at to a transparent video touchscreen built into the window. This window and the importance of improving the passenger appearance received very good customer reaction, media attention and other articles at EBACE.

Size does matter, and GKN Aerospace's division, Fokker Services, expanded what they started at the Hamburg Air Show in April where they debuted their large SPD-Smart SkyView panoramic aircraft window, by having multiple SkyView windows in a simulated cabin fuselage. This acted as a private meeting lounge for Fokker executives at EBACE to be able to meet with important customers in a comfortable lounge environment surrounded by spacious windows that are the largest windows ever designed for jet aircraft.

SPD-Smart EDWs are standard equipment on seven different aircraft and an option on others. The aircraft that have featured SPD-Smart windows, either in serial production or concepts and mockups displayed at aircraft industry events include Honda Aircraft HondaJet, Textron-Beechcraft King Air 350i, King Air 250, King Air C90GTx, Epic Aviation E1000, Dassault Falcon 5X, Airbus Helicopters H175 and other fixed wing and rotor aircraft. In addition, SPD-Smart EDWs have been installed in the aftermarket on over 30 different aircraft models.

Research Frontiers (NASDAQ: REFR) is the developer of SPD-Smart light-control technology which allows users to instantly, precisely and uniformly control the shading of glass or plastic, either manually or automatically. Research Frontiers has built an infrastructure of over 40 licensed companies that collectively are capable of serving the growing global demand for smart glass products in automobiles, homes, buildings, museums, aircraft and boats. For more information, please visit our website at www.SmartGlass.com, and on Facebook, Twitter, LinkedIn and YouTube.

Şişecam attended the 4th Innovative Glazing Global Summit
Şişecam participated in the 4th Innovative Glazing Global Virtual Summit addressing the latest trends in the glass industry.
Saudi Build 2022
The 32nd International Trade Exhibition for Construction Materials, Building & Environmental Technology, will take place from 14-17 November 2022 at Riyadh International Convention & Exhibition Center.
OmniDecor glass design | Milano Design Week 2022
OmniDecor is taking part in the 2022 edition of the Milan Design Week with an articulated series of initiatives.
Early Bird Registration is Still Open for the Facade Tectonics 2022 World Congress!
Register today with our Early Bird pricing to claim your spot amongst the industry’s most influential leaders and academics.
Joint General Assembly Meeting of GKFP, QKE and EPPA
On 12 May 2022, around 50 members, partners and media representatives came together at the Novotel in Karlsruhe for the joint General Assembly Meeting of the three associations.
Fensterbau Frontale 2022: “Summer Edition” with extensive supporting programme
Fensterbau Frontale takes place as a one-off “Summer Edition” from 12 to 15 July 2022.

Glastory: When it comes to energy