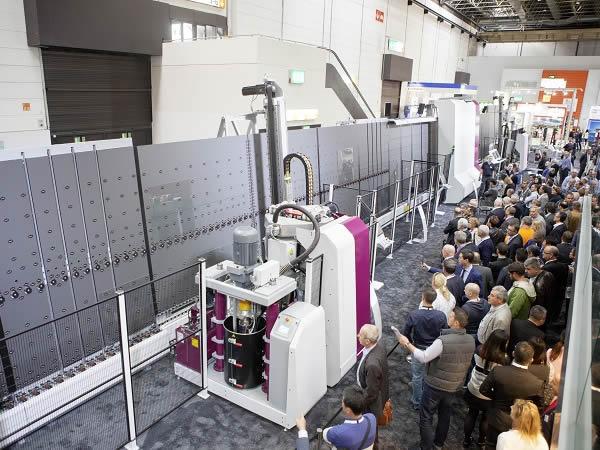 Photo source
At the glasstec the crowd of people interested in the exhibited TPA line with Fast Lane concept (vertical Lift-over System) was enormous | Photo: www.lisec.com

Lisec has developed an entirely new concept for the production of insulating glass units with thermoplastic spacers.

The new system is efficient, effective, fast and a real hit also from the outside due to the new LiSEC machine design.

At the leading trade fair of the glass industry, the glasstec, LiSEC presented the TPA line with the Fast Lane concept (vertical lift-over system) for the first time.

The name Fast Lane says it all: sheets which do not require a TPA application are led past the applicator head and are thus overtaking other ones.

At the glasstec show, an enormous crowd of people was interested in the exhibited line; the visitors were able to appraise the benefits of the new plant several times a day:

Application on the Fast Lane

The new LiSEC line contains a unique feature. In order to increase the cycle time, the sheets which are not applied are transported beyond the applicator station.

This is the LiSEC Fast Lane concept: only those sheets are passing through the sealing plant which are actually sealed.

The line runs fully-automatically from the cutting (to size) to the stacking of the finished insulating glass units and is monitored and controlled by a control station.

This method does not only ensure a consistent process, it is also ensured that the sheets do not have to be handled manually during the process.

That means: less occupational accidents (cuts) and no defective sheets due to contamination.

The new LiSEC TPA line with its Fast Lane concept is designed so that only one operator is required in order to control the entire insulating glass line.

The operator’s only responsibility is to monitor that the plants are running and to intervene in case of interruptions.

Compared to conventional TPA plants, the new TPA line is able to produce cheaper by 10 – 15% with the Fast Lane concept due to the faster cycle time and the minimal need for operators.

In case of the new TPA line, LiSEC can not only score from a technical point of view but also in terms of its look, in other words the machine design.

The new design was presented at the trade fair for the first time and it emphasizes LiSEC’s claim: best in glass processing.

When developing the new design, which comes from the Vienna design office spiritdesign, LiSEC has considered the production as well as the assembly: thus, metal sheets were designed smaller in order to ensure an easier handling and the number of colors was reduced.

The perfect interaction of all integrated plants ensures the high speed and process quality. In the first step, the unloading of the harp racks is done sequentially by the automatic unloading station.

Then, the sheets are running through the washing and drying plant and the quality scanner which checks them for their quality prior to the assembly.

The correct sorting of the sheets for the paired and tandem operation of the press is automatically taken over by the vertical lift-over system, a second transport route above the TPA plant.

Here, sheets which do not need any TPA application are able to pass other ones. The elements are assembled and filled with gas in the press and after that they are finished in the sealing plant.

Both the press as well as the sealing plant were specifically revised for the Fast Lane concept.

Maximum quality from the intake to the finished element with an excellent cycle time – the TPA line in the Fast Lane concept is best in insulating glass production. Seminole Hard Rock Hotel & Casino made with SentryGlas®
Stunning six-string edifice strikes a chord on Hollywood, Florida skyline thanks to SentryGlas® – both inside and out.
8 signs you may need a Viprotron scanner
Here are some signs, where support comes from using Viprotron scanners.
Eurovetro & Forel: “Glass evolves, and we evolve with it”
Eurovetro upgraded their equipment with a new Forel ‘High Tech’ line for insulating glass, with an edging machine and flexible profile applicator.
Lars Wismer appointed new director of glasstec
As of 1st of December 2022 Lars Wismer (49) will lead the team of glasstec, as well as A+A, International Trade Fair for Safety, Security and Health at Work.
LiSEC – Right in the middle of the international trade fair action
All.in.one:solutions: under this motto LiSEC presented complete solutions from a single source for flat glass processing.
A+W awarded finalist in the 'World Market Leader' category
Software from Hesse to the world: Minister of Economics Tarek Al-Wazir honoured the Pohlheim-based company A+W as a finalist in the 'World Market Leader' category.