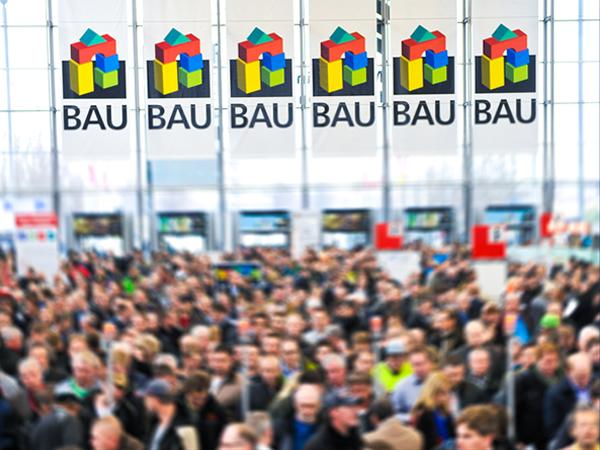 For the first time ever, 80,000 of the more than 250,000 visitors who attended BAU 2017 were from abroad. As a result, BAU, the World's Leading Trade Fair for Architecture, Materials and Systems, managed once again to make significant gains at the international level (2015: 72,000 visitors).

With more than 65,000 visitors from architecture and planning offices, BAU managed yet again to solidify its reputation as a trade fair for architects. With a total of 2,120 exhibitors from 45 countries, it also set a new record for the number of exhibitors.

Reinhard Pfeiffer, the Managing Director responsible for the fair, is pleased with the results: “Once again, BAU has set a number of new records. In doing so, it has done an impressive job of demonstrating its position as a driving force behind innovation and a source of momentum to the construction industry.”

During BAU, Messe München announced that it has acquired a majority share of FENESTRATION CHINA, China's most important trade fair for windows, doors and facades.

The new joint platform FENESTRATION BAU China will take place for the first time in Shanghai from November 7 to 10, 2017. The merger has also allowed BAU to strengthen its position in China, the most important construction market in the world.

“BAU was founded in 1964, and in its more than 50 year history, it has developed into an internationally respected mega event. Everyone who made their way through the fair's 17 exhibition halls was left with that impression,” explained Mirko Arend, Exhibition Director of BAU.

The halls and exhibition stands were full from day one. As always, the halls were characterized by elaborately designed stand presentations—many two-stories high.

The visitors that could be seen and heard at the stands came from around the world. The 2,120 exhibitors from 45 countries were well prepared. Many of them brought specially trained employees to BAU to better serve all the international guests.

But even though BAU 2017 demanded complete dedication from its exhibitors, given all the new contacts, high-quality visitors and positive economic outlook, the atmosphere at the exhibition stands was outstanding.

As in the past, exhibitors were pleased with the internationality, quality and diversity of the trade visitors. The clear tenor: BAU is in an exceptional position, and it is the industry's most important trade fair—both at home and abroad.

“Once again BAU has put its special status as the industry's leading international trade fair to the test,” explained Bernard Gualdi, Director of Corporate Communications at Braas. “BAU has proved more than ever that it is the leading international exhibition,” underscored Thomas Lauritzen from Schüco. Ayten Yilmaz from WICONA kept his remarks brief: “BAU is sensational.”

Werner Hansmann, CEO of Saint-Gobain Rigips, described his impression: “There was a noticeable increase in the number of international contacts this year.”

Hannes Spiss was at BAU with the Chinese company Northglass for the first time, and the Vice President was “completely overwhelmed.

For us, participating again in 2019 is an absolute must.” When asked about the next BAU in two years, nearly all exhibitors gave the same answer: We'll be back!

BAU's position as the absolute number one in the industry was also verified by a survey of exhibitors conducted by market research institute Gelszus, the results of which are almost impossible to improve upon.

According to the survey, nearly all exhibitors (98 percent) gave BAU a rating of good to excellent. Its character as a leading exhibition was recognized on a broad front (95 percent). 95 percent of exhibitors gave it top marks for quality, 91 percent for the share of international visitors.

Less surprising: This time exhibitors gave the current state of the economy better marks than in 2015. 91 percent—compared to 81 percent two years ago—gave it a rating of good to excellent.

Exhibitors also confirmed that the willingness to make concrete business deals has improved compared to 2015. Almost all exhibitors (98 percent) plan to participate again in 2019.

The results of the visitor survey remained stable at the highest level. Further improvement is hardly possible in this case, as well. As in 2015, 98 percent of visitors who attended BAU gave it a rating of good to excellent, and 96 percent plan to attend again in two years.

Visitors gave the fair top marks for the scope and completeness of its exhibits (98 percent good to excellent) and for the presence of market leaders (95 percent).

Visitor satisfaction was between 90 and 100 percent in all categories, which is also normal for BAU. 95 percent of visitors reported reaching their most important goal, which was to gather information about new developments.

That was slightly more than in 2015. Nearly all visitors, exactly 95 percent, were trade visitors, and 62 percent said that they held management positions.

Even though BAU's most convincing qualities are the diversity of its visitors and the diverse range of topics that it covers, this year's fair revolved around two themes.

The exhibitors in the BAU IT sector in Hall C3 demonstrated how strongly digitalization is influencing the future of building. The topic of building information modeling (BIM) was omnipresent there.

The other topic that dominated the exhibition halls: Smart building elements and systems that have specific properties and react to outside influences—from door handles with finger scanners to energy-generating facades and system solutions for completely connected smart homes.

While BAU is known for the quality of its exhibitors and their stand presentations, that applies all the more to its supporting program.

As in the past, the three exhibition forums were popular attractions at this year's fair. They were located in the middle of the halls (C2, A4 and B0), so visitors could hear the industry's hot topics explained by independent experts from the architecture, research and industrial sectors as they walked by—and free of charge!

Presentations revolved around the digitalization of planning and construction, modular serial construction and the topic of ‘smart’.

The Forum in Hall B0 also had an additional focal point for practical solutions for restoring and modernizing buildings. Real Estate Industry Day and Universities Day were also held there.

The exhibitors' presentations were accompanied by special shows on the main themes of BAU 2017 (Intelligent Facades—Digital Planning, Building and Operation—Networked Buildings—Building and Living 2020), covering various aspects and points of view.

BAU 2017 was officially opened by Dr. Barbara Hendricks, Germany's Federal Minister for the Environment, Nature Conservation, Building and Nuclear Safety (BMUB). In her speech, she referred to the construction industry as a “essential industry” for key social functions.

She said that we are on the right track with housing construction initiatives. “Germany's construction sites are humming. After years of stagnation, we have seen the trend turn around.” After a full tour of the exhibition, the Minister opened the BMUB Conference, the title of which was “Construction policy is necessary!”

Once again, the Long Night of Architecture was a highlight of BAU. On Friday evening, more than 35,000 visitors wanted to experience 70 of Munich's buildings and architectural highlights while lighted up at night (see also BAU PI No. 19).

As always, several awards were presented within the scope of BAU. They included the 1:1 ‘First House’ Award in conjunction with ‘Bauwelt’, the AIT Innovation Award, the BAKA Award for Product Innovations, the ‘Built on IT—Building Jobs with a Future’ Award, the Building Materials Market Oscar and the Bavarian Engineers Award.

The twelve winners, whom were selected from more than 1,500 competitors from around the world, can look forward to half-year internships with leading international architects. They looked thrilled as they stood side by side with their future employers.

The next BAU will feature two new halls when it takes place at the Messe München trade fair center from January 14 to 19, 2019. The trade-fair center will then have 200,000 square meters of exhibition space.

GlassBuild America Day 3 Recap Video
The sights and sounds from the last day of the 2021 edition of GlassBuild America in Atlanta, GA.
TurkishGlass participated in the GlassBuild America 2021 with high quality and a wide product range
TurkishGlass was highly recognized by visitors with its high production capacity, wide product range, high quality and experience.
Fenzi Group on stage at Vitrum 2021
Advanced technology, ongoing innovation, focus on the environment
Windows, Doors & Facades Event and Gulf Glass were a huge success
Windows, Doors & Facades Event and Gulf Glass come to a successful close with 1,200+ exhibitors participating from all over the world.
Best in Show Awards Presented at GlassBuild America
The following companies received Best in Show Awards for their exhibit booths at GlassBuild America 2021.
Sights & Sounds of GlassBuild America
Back to Business. Back to GlassBuild.
GlassBuild America 2021 Day 2
See all the happenings from the floor of GlassBuild America 2021 in Atlanta, GA.
Economist: 'We Are Looking Forward to Years of Growth'
While the overall U.S. economy may see a deceleration in growth in 2022, the North American glass industry can expect “a pretty appealing runway” with “years of growth,” says Connor Lokar, senior forecaster for ITR Economics.
Glazing Executives Forum Addresses Labor Shortage and Supply Chain Issues
The Glazing Executives Forum, now in its 15th year, is organized by the National Glass Association and held in conjunction with GlassBuild America.
Product Trends at GlassBuild America
Pandemic Challenges Accelerate Automation
International Window Film Conference and Tint-Off™ Returns to San Antonio in 2022
The annual International Window Film Conference and Tint-Off™ (WFCT) makes its way to the Henry B. González Convention Center in San Antonio, Texas, Sept 14-16, 2022.
GPD 2021 Announcing New Dates
GPD Finland 2021 – Winter Edition Dates Release