A recently opened landmark transport interchange in Rochdale which features extensive structural glazing by GLASSOLUTIONS has caught the attention of the industry’s leaders by picking up a string of awards in recognition for its architectural and engineering excellence.

Glazing for the internal and external façades and shop frontages for the Rochdale Transport Interchange was designed by GLASSOLUTIONS to create a frameless, glass-to-glass appearance and achieve visual consistency across the project."390" height="249" src="/UserFiles/4(456).jpg" alt="" />

GLASSOLUTIONS was brought in at the planning stages of the £11.5m project, working closely on the design with AHR Architects and Kier Construction. They introduced Wicona, who put forward the WICTEC 50SG option, based on one single system and common components, tooling and processes to simplify specification and reduce time and costs in fabrication and installation.

GLASSOLUTIONS Sales Manager Keith Ferguson said: “This was a particularly complex façade project because the interchange is located on a sloping site, resulting in the angle increasing from one mullion to the next, which means every single pane of glass had to be different. Saint-Gobain glass was used right across the interchange as part of a highly innovative, energy-efficient and specially-adapted glass and aluminium façade solution from Wicona.”

The project was funded jointly by the Department for Transport, Transport for Greater Manchester and Rochdale Borough Council. The building was designed to be highly transparent, with an enclosed single concourse creating a dramatic cornerstone feature to the town for visitors and daily users. The project has successfully delivered an enhanced experience for users, with exceptional passenger facilities, and is one of Europe’s first hydroelectric powered transport interchanges. 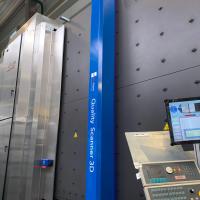 Prediction of moisture diffusion and failure in glass/steel adhesive joints