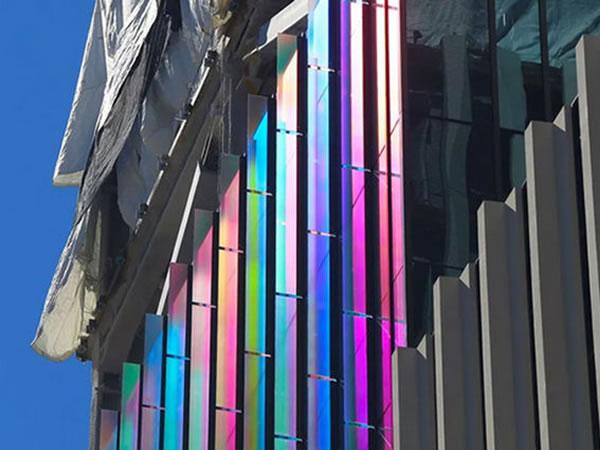 The Dichroic Glass fins fitted to the windows on the Loma Linda University Children’s hospital tower are a unique decorative feature that have captured the attention of the campus community.

The Children Hospital’s appearance will vary from day to day because of the kaleidoscopic array of colors reflected on the tower windows.

Work is continuing on the instillation of glass panels that cover the new Loma Linda University Children’s Hospital tower. The unique material produces shifting colors on the building’s exterior as the light changes throughout the day — an effect similar to a prism.

The array of colors is projected onto the glass wall by Dichroic glass fins, a product of the Goldray Glass Company, headquartered in Calgary, Alberta, Canada. The Dichroic glass product is actually a layer of color-shifting film material sandwiched between two glass panes. The glass will be attached to the hospital exterior as fins, which will capture light rays and project a changing array of colors on the hospital wall.

The colorful exterior to the Children’s Hospital tower is an effort to make the building especially attractive to its young patients, as well as to families and visitors.

Loma Linda University Children’s Hospital was founded in 1992 and is the only children’s hospital serving children from a four county area that comprises nearly 25 percent of California’s land mass. The hospital admits more than 15,000 children annually, and it provides ambulatory care to another 160,000.

The ongoing construction, which began approximately two years ago, is a part of Loma Linda University Health’s Vision 2020 – The Campaign for a Whole Tomorrow. New buildings for both hospitals will meet and exceed California’s upcoming seismic requirements for hospitals.

You can follow the rise of the towers on a daily basis by checking the construction web cams.

We're sharing photographic updates of the hospital construction work on a periodic basis. Watch for special emphasis on some of the behind-the-scenes-views and untold stories at the Vision 2020 website.

This vignette is adapted from a blog by Dennis E. Park, which appears on the website www.docuvision2020.com.

The edge of a glass panel that is being positioned to be installed on the east side of the seventh floor.

The Dichroic glass is delivered to the site in a wooden box, which is sequentially numbered to match the glass panels. Here, two tower glass workers carefully lift a fin out of the box.

Workers from the Tower Glass crew discuss the sequence of the next panel lift.

COLORS ON A CLOUDY DAY

The Dichroic fins have been installed on the east facing windows. Even though this photo was taken on a cloudy day, color still emanates from the Dichroic fins.