On the inhomogeneity of residual stresses in tempered glass panels 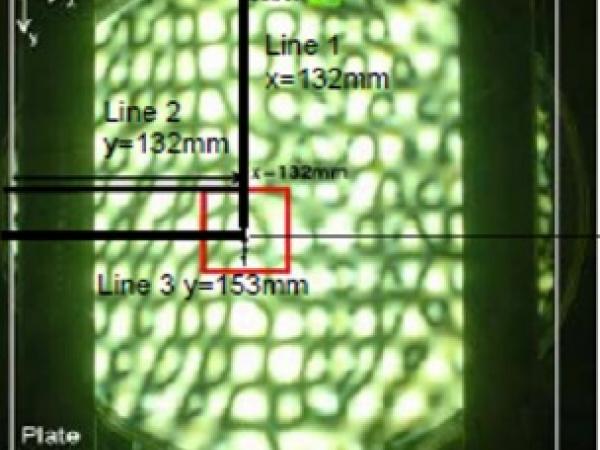 The paper shows that the residual stress at the surface of tempered glass panels may vary both locally and globally, i.e., stresses near the edges and corners of the panels may be considerably different from the stresses in the middle part of the panels.

The paper shows that the residual stress at the surface of tempered glass panels may vary both locally (at a distance equal to the distance between the cooling jets) and globally, i.e., stresses near the edges and corners of the panels may be considerably different from the stresses in the middle part of the panels. That should be borne in mind while assessing the degree of temper by non-destructive measuring of the residual surface stress.

According to the European Standard EN 12150-2:2004, to establish whether a product conforms to the definition of thermally toughened soda lime silicate safety glass, initial type testing shall consist of a) mechanical strength measurement in accordance with EN 12150-1 (also EN 1288-3:2000) and/or b) fragmentation test in accordance with EN 12150-1:2000. Thus European standards prescribe application of the four-point bending test and/or the fragmentation test. Both of these tests are destructive and time-consuming.

At the same time, during recent years photoelastic residual stress measurementmethods have been considerably developed and applied. In [1] data is described about testing of 360 glass panels by first measuring the residual surface stress with the GASP polariscope (GASP is registered trademark of Strainoptics Technologies, Inc.) [2]. Paper [1] shows that a good correlation exists between surface compressive stress data and mechanical strength according to EN 1288-3 (Fig. 1). Similar results have been obtained by several other authors [3–6].

1). Since sa is known, measurement of the surface residual stress roughly determines the bending strength of the glass. Equation (1) does not take into account that the flaw population changes as a result of the strengthening process.

Another factor to be considered is possible local variation of the residual stress. Since in tempering furnaces the cooling of the panels is carried out by jets, the cooling of the surface of the panel is inhomogeneous. Due to this, the residual stress may vary at a distance commensurable with the distance between cooling jets. Let us mention that vibration of the jet grids leads to more uniform distribution of the tempering stress (see, e.g. [7], p. 135).

Fig. 1. Relationship between the surface compression and strength of clear float glass specimens (from [1], courtesy of GPD 2005).

The aim of this paper is to investigate how this global and local inhomogeneity of the tempering stress field may influence the measurement results.

Scattered light polariscopes for residual stress measurement in glass have been developed by several authors [8,9]. However, these polariscopes are complicated devices, which can be used only in laboratory conditions and cannot be used in factory conditions near the production line.

For industrial applications, a portable scattered light polariscope, referred to as the SCALP, has been developed at GlasStress Ltd [6]. A schematic of the optical measurement arrangement and a photograph of the SCALP are shown in Fig. 2. A laser beam is passed through the panel at an angle of about 45°. Stress birefringence changes the polarisation of the laser beam. These changes are recorded by measuring the variation of the intensity of the scattered light along the laser beam with a CCD camera. From this measurement data the stress profile through the panel thickness is determined. Spatial resolution of the SCALP in the plane of the panel to be measured is about 0.5 mm; in the direction of the thickness of the panel it is about 20 μm.

The SCALP is calibrated using a four point bending test. Since it has no moving parts, no additional calibration is needed. The polariscope is automatic, and stress profile measurement time is about 3 s. However, to calculate the stresses, the value of the photoelastic constant is to be known.

Fig. 2. Optical measurement arrangement schematic (a) and photograph (b) of the portable scattered light polariscope SCALP.

3. LOCAL VARIATION OF THE TEMPERING STRESSES

Stress field in a tempered glass panel No. 1 of dimension 300 × 300 mm with thickness 5.5 mm was calculated and partly measured experimentally with the SCALP [10]. Calculations were made on the basis of a mathematical model, described in [11]. Figure 4 shows photoelastic fringe pattern in a circular polariscope. Inhomogeneity of the stress field is clearly visible.

Distribution of the calculated and measured stress σx in the mid-surface and upper surface of the plate are compared in Fig. 5. It should be mentioned that the very high stress gradient in the plane of the plate may have influenced the precision of the photoelastic measurements.

Fig. 4. Photoelastic fringe pattern of the panel No. 1.

Figure 6 shows the fringe pattern of a part of a tempered glass panel No. 2 and variation of the stresses σx and σy along the scanned line.

It can be seen that in the middle part of the panel (at a distance from the edge more than 50 mm) the stresses are more or less isotropic, i.e., σx

σy , while near the edge the stress components σx and σy differ considerably. Local variation of the stresses between x = 7 mm and x = 31mm is also distinct – being about 10 MPa at a distance of 10 mm.

Fig. 6. Fringe pattern near the edge of the tempered glass panel No. 2 and distribution of the surface stresses σ x and σ y along the scanned line.

Fig. 7. Interference pattern in a circular polariscope of the central part of a sidelite.

Fig. 8. Directional variation of the surface stress at points #1 and #2 of the sidelite shown in Fig. 7.

Let us mention that if surface stress measurement is carried out with the SCALP, which measures stress variation along a laser beam, the local variation of the surface stress can be measured and the stress value is determined at the point where the laser beam enters the surface of the panel. In contrast, the GASP device gives an average value of the stresses for a small distance along the measurement direction.

4. GLOBAL VARIATION OF THE TEMPERING STRESSES

Besides the local variation of the tempering stresses in the scale of several centimetres, on glass panels the value and character of the residual stresses depends also on the location on the panel. In the middle part of the panels the residual stresses have mostly isotropic or close to the isotropic character, i.e. in all the directions the stresses have about the same value. Near the edges and corners the formation of the tempering stresses is influenced by inhomogeneous cooling conditions and therefore stresses in different directions may differ considerably. This is valid in general. However, local variation of stresses may considerably influence the situation.

Fig. 9. Geometry of a tempered glass panel. According to European standards the stresses are to be measured at the centre and at the four corners.

Fig. 10. Directional variation of the surface residual stress at the centre and at the points A and E.

At the corner points the stress ellipses have considerable eccentricity. It means that at these points stress measurement in an arbitrary direction is not sufficient. To obtain real values of the residual stresses, if measurements are carried out with the SCALP, the measurements should be carried out in three directions, at 0°, 45° and 90° to the coordinate axes. On the basis of these measurements the directions of the principal stresses and their values are automatically calculated.

It has been shown that residual stresses in tempered glass panels can be highly inhomogeneous. Both the local and global inhomogeneity has been investigated and demonstrated on several examples. General information about the inhomogeneity of the stresses can be obtained by observing the panel normal to its surface in a plane circular polariscope. Principle of the work of a scattered light polariscope, or SCALP, has been explained.

Using this device, both local and global inhomogeneity of the tempering stresses have been recorded in several cases. From the given examples it follows that while in the middle of the glass panels the tempering stress is usually isotropic and stress measurement in one direction may be sufficient, near the edges and corners that may not be the case and direction-dependent measurements should be carried out.

Since the local variation of the surface tempering stress may reach about 10 MPa or even more, the precision of the SCALP (several Mpa’s) is sufficient for non-destructive assessment of the strength of the panels.

The authors are thankful to Dr. Jonathan Williams and to Dr. Jüri Josepson for helpful remarks.

Banco Popular HQ - Auditorium, Madrid (Spain)
This document refers to a small explanation of the Auditorium execution process from the design and development of the technical solution, testing, manufacturing, to its final execution.
Systematically Unique Facade Geometry
For over two decades and following a century of efficient, functional and often orthogonal architecture, we are experiencing the extensive search for ever more complex building geometries and expressive architectural forms.
Structural Silicone Joints in Cold-Bent SSG Units
Use of cold-bent and warped glass units in unitized curtain walling has been getting a state-of-the-art application for the last years.
Cyclone Resistant Glazing Solutions in the Asia-Pacific Region
A Growing Market to Meet Present and Future Challenges
Glastory: More daylight for good health - case Kaari Hospital in Finland
As a modern society, we’re spending about 90% of our time indoors – at home, in offices or commuting. How is it possible to get access to daylight, when we can’t naturally be outside? By making buildings more transparent.
Approaching Hot Bent Annealed Glass
The paper will provide an overview of the currently applied engineering approach in the industry for curved hot bent glass in the absence of standards and codes.

The key themes at BAU 2021: Resources and recycling