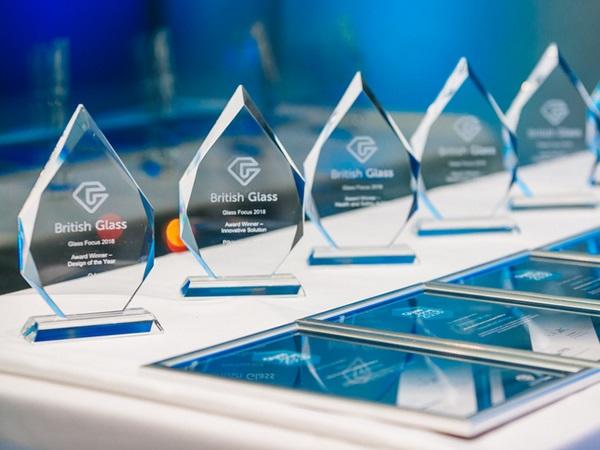 A bright future is ahead for glass, thanks to a serious focus on innovation, the environment, and sustainability, the industry’s annual prestige awards ceremony at the Millennium Gallery in Sheffield heard. (Thurs 22 November).

“Judging gave us all a difficult time,” said Dr Nick Kirk, Technical Director of the organisers and hosts British Glass, the industry association with a national and international membership. “And if there’s one thing we’d like to say it’s that all the entries were excellent. There were many intriguing and  beautiful designs, and amazing ideas, and we could clearly see that the sector’s businesses believe strongly in developing their people for the future. We are delighted that we have an absolutely outstanding ‘Apprentice of the Year’ and ‘Company of the Year’.

“There were some that were at an early point in the development of the project submitted, and I would urge them to enter again next year when they are further along the road. 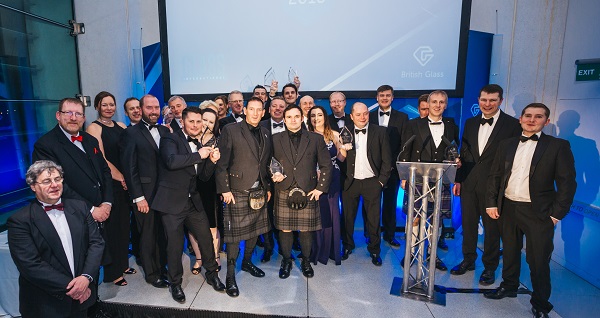 Winners in each category of the Glass Focus 2018 Awards were:

Design of the year: O-I with the Wildcat Gin

The Wildcat Gin bottle was designed and produced for Whyte and Mackay, which wanted a distinctive look for its new premium gin: the design and the technical skills needed made it a UK first.

The bottle tells the brand story from its origins in the illicit, night-time gin trade of the 1700s, when gin was literally sold ‘under the sign of the cat’. The clear glass is highly sustainable, using over 35% cullet (recycled glass), and with a journey of just 18 miles from O-I Alloa to the filling plant in Grangemouth.

Whyte and Mackay also knew glass was the only packaging material capable of creating the radical shape they wanted for the brand’s launch, and the award entry explained what the judges said was a challenging design to put into production. O-I achieved this by undertaking a manufacturing first in a two-stage engraving process. Some of O-I’s most experienced manufacturing personnel from the UK and overseas were involved in ensuring the dual engraving would be a success.

Millions of birds die each year when they fly into glass in homes, offices, and bus shelters. This is a growing challenge for the glass industry, architects and specifiers. Reflection strikes, when birds fly toward something reflected by the glass such as the sky or vegetation, are the main cause of the problem: existing products are effective but reduce the transmission of the glass and the view from inside the building.

Pilkington has developed Avisafe™, a patterned UV enhanced coating which makes glass more visible to birds, at its R & D Technology Centre in the UK. In tests it outperformed the best solution currently on the market, and it prompted unanimous admiration from the judges. Simon Slade, who works at the R & D Centre, is a keen ornithologist and was a driving force behind the project.

The product has not yet been commercially released, but has been successfully used on jumbo plates of glass. Pilkington envisages that it will be possible to use it for other purposes such as solar control, safety and security, and noise control.

Ardagh Group’s Doncaster glass  plant tackled  the  subject  of  mental  health - often  a  taboo subject  in  a  male-dominated  industry - with five off-site ‘Inspire Days’ for all staff. During a 2018 review of reasons for absence at the plant mental health conditions ranked high, and managers felt that colleagues needed a greater understanding of it. The days, which were particularly relevant to shift working,  included a  mental  health  workshop,  leadership,  healthy  eating, sleep,  relaxation,  and  mindfulness. Finally colleagues in groups created a future vision of the plant taking into consideration their department, new technology, continuous improvement, competitive advantage, and customers. The company says that the  impact  has  been  outstanding: colleagues  feel  able  to openly address mental  health  issues without  stigma and understand how  to offer  real  support  to each  other.

Ardagh Group’s Irvine plant in Scotland runs 24/7 producing millions of glass bottles and jars for major consumer brands. However, it is an area that experiences intermittent power failures from the national grid, which can slow down or stop production.

A reliable source of energy was needed, and investigating this provided the opportunity to reduce the plant’s carbon footprint at the same time. Ardagh worked with ESB Smart Energy Services to install a hybrid battery storage system which provides green energy, giving back-up during peak energy consumption, and feeding energy to the grid when demand is low. It taps into various renewable energy sources such as solar and wind rather than diesel, and reduces CO2 production by over 400 tonnes annually. The pioneering technology has transformed the way energy usage is managed at the plant and supports the company’s commitment to environmental responsibility and sustainable manufacturing processes.

The battery was manufactured by Tesla and GridBeyond owns the grid-optimising platform that delivers energy back to the national network.

Gareth is about to start his third year of a four-year apprenticeship in the mould shop at O–I’s Alloa plant, making and servicing moulds for some of the world’s most famous and prestigious spirits brands. He has impressed his supervisors and colleagues so much that he is seen as a possible future CNC programme/operator in the department.

Gareth has shown attention to detail, initiative and a ’fantastic’ work ethic. During a period in the plant maintenance department he kept his log book to such a high standard it has been used as a standard operating procedure for future furnace repairs.

The company says: “Gareth exemplifies the kind of young employee who will develop into the Master Makers of the future – adding fresh insight and technological innovation to the encyclopaedia of knowledge which has sustained mass-produced glass as the consumer’s preferred packaging for well over 100 years.”

In 2016 Saint-Gobain realised that while its commercially differentiated supply chain management service was profitable and praised by customers, it was difficult to maintain. There were more and more complex products, more combinations of products, and shorter lead times. This was stretching parts of the workforce, particularly planning and logistics, both at a human and business level.

The company commissioned a full review of its business processes, and then set about empowering local teams to build their vision of the best way to provide the service-driven delivery Saint-Gobain is committed to. They were asked for ideas from current and previous workplaces and undertook a total of 1,300 hours of external training. A team of 35 documented the existing working practices, envisaged the ideal way forward, and was allowed to put this into reality.

The company says: “Visibility and communication between disciplines has massively increased with together with respect for colleagues’ challenges and a willingness to work together. Despite exceptional market forces and multiple manufacturing issues, this has enabled strong decision making, higher levels of customer satisfaction, lower stocks and a much calmer, in-control mood in all corners of the business.”

Nippon Electric  Glass  Fiber UK intrigued the judges with its first-ever entry in the awards. Electric Fiber, a Japanese-owned company which makes glass fibre used in wind turbines, wanted to engage more  employees  at its Wigan base in  improving  the ‘Near  Miss’  hazard reporting  process. It used the title Hiyari  Hatto, which is the Japanese  for  ‘Near  Miss’ to challenge all employees  to  submit  one  report a month  of  a  near miss, an unsafe act, or an unsafe condition. The project also gave Electric Fiber the opportunity to educate staff about hazards and to get their input into reducing  risk  and accidents. The  project used noticeboards,  monthly  newsletters,  digital  signage  and  group  discussions, and the company says it has seen “an  excellent  response” with  over half of all employees putting in a monthly report. The project also encouraged all contractors in this year’s furnace rebuild programme to take part.

Dave Dalton, Chief Executive of British Glass, has visited the Nippon Electric Glass plant in the UK  and said: “I was very impressed with the company’s work and its ethos. Nippon Electric Glass strives to build a brighter future for the world by uncovering the unlimited possibilities of glass for more advanced creative manufacturing. The ‘Near Miss’ Hiyari  Hatto entry is a clear example of its consistent drive to improve health and safety conditions.”

sedak isosecure receives award
Insulating glass in all bullet-resistance classes "A+Awards Special Mention 2020" for sedak isosecure.
Advancements in Structural Glass & Glass Facades | WORKSHOP – SESSION 2A
Do not miss this opportunity! Register for the August 13th Facade Tectonics session (12-2pm) on Advancements in Structural Glass & Glass Facades.
GlassTrend webinars
Since all on-site GlassTrend events in 2020 are cancelled, the GlassTrend Board decided that a series of TEDx-like webinars will be organized during autumn of this year.
Pandemic Silver Linings: A glazier’s perspective for management
During these unprecedented times, it’s more important than ever to be working on your business, rather than working in it.
Virtual Glass Summit recap
ACerS first virtual conference welcomes high attendance and variety of glass topics.
Şişecam presents webinar series on Designing for a New World – Post COVID-19 powered by Architect and Interiors India
The fourth episode of the webinar series will see a discussion on the many facets of glass and its use in the architectural and design realm.