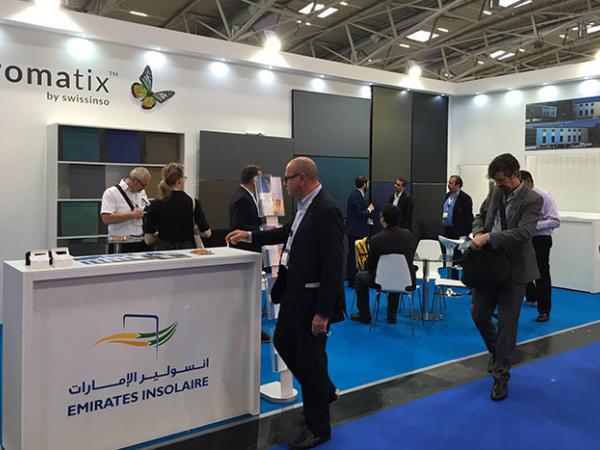 Emirates Insolaire LLC, a pioneer in the development of new solar technologies and a joint venture of Dubai Investments PJSC and SwissINSO Holding Inc., is expecting strong growth for its sustainable, energy-efficient coloured solar panel technology amidst surging demand for BIPV across the globe.

Over 1,000 exhibitors and 40,000 trade visitors attended the exhibition.

As the demand for energy-efficient solar technology surges in Europe, GCC and the globe, Emirates Insolaire is expecting sales of 50,000 square metres of coloured Kromatix solar glass.

In 2015, total installed output in Europe rose to almost 100 GW, making the continent one of the largest markets for photovoltaics. A total of 50 gigawatts [GW] of new photovoltaic capacity were added worldwide in 2015 in the midst of a strong growth phase, which will witness the global photovoltaic capacity increasing to over 300 GW in 2016 and 500 GW by 2019.

The coloured solar panels from Emirates Insolaire offer high efficiency, with each photovoltaic module capable of generating 170 to 190 watts per square metre for roof or 110 to 130 watts per square metre for facades. Emirates Insolaire’s coloured solar panels and photovoltaic modules enhance the design of any building and can be easily integrated to any façade or roof. KromatixTM is becoming the reference, and simply put, becoming just the building envelope to efficiently produce energy from roof to bottom.

Zak World of Façades Middle East - 17th Mar 2020, Conrad, Dubai
The world's leading conference on façade design & engineering.
Tecglass installs the largest digital printer for glass in the Middle East
The innovative Vitro Jet FS24 digital printer with Side Kinetix technology will be installed in the UAE.
A new solar era in Spain begins
By adding an estimated 4.7 GW in 2019, Spain returns to the continent’s top solar markets and is the clear market leader in Europe.
Entries open: International innovation prizes for the new energy world
From January 1 to March 31, 2020, market leaders, SMEs, start-ups and project owners are all invited to submit their pioneering ideas and projects for the most important innovation prizes in the energy industry – The smarter E AWARD, Intersolar AWARD and ees AWARD.
Top 10 Moments from The Big 5 2019
From its humble beginnings in 1979 to the number one meeting place for the global construction community in the Middle East and Africa, The Big 5 celebrated its 40th anniversary in Dubai.
The Middle East Construction Industry considered one of the top locations to invest, according to ground-breaking new report
GCC and the wider Middle East were recognised for standout construction opportunities based on responses from nearly 6,000 global industry professionals from 136 countries.

Evaluation of adaptive facades: The case study of Al Bahr Towers in the UAE