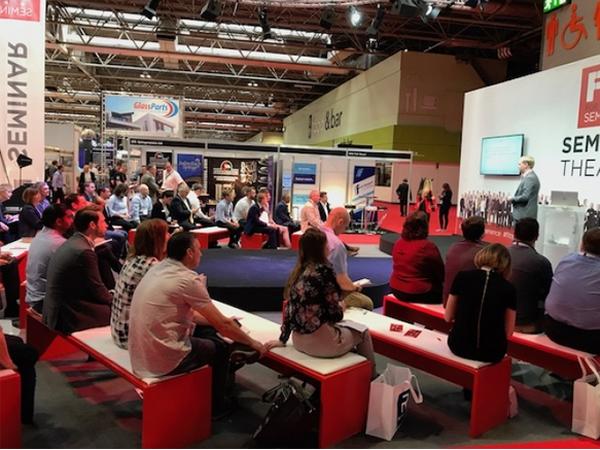 After an extraordinary three days at the National Exhibition Centre the 2017 FIT Show has been hailed as another momentous event in the series that first took place just four years ago.

The event was universally praised as being an unequivocal success with exhibitors taking healthy numbers of sales leads from visitors keen to engage and explore the hundreds of new products on show.

The organisers have revealed that 9,935 unique visitors attended this year’s FIT Show, a number that rises to 13,285 when their revisits were counted across the three days of the event (multiple daily entries are automatically de-duplicated).

Daily numbers were Tuesday – 4808; Wednesday 5136; and Thursday 3341, figures that reflected the subjective comments of exhibitors at the show and typical for many business-to-business events, with the middle day showing the highest numbers.

This year saw a significant presence of aluminium for the first time at any fenestration industry B2B event for more than three decades and visitors flocked to some of the most exciting stands as the surge in interest in aluminium framing continues.

The majority of PVC-U systems producers were in attendance and they also enjoyed crowds as they rode the wave of interest in coloured and heritage framing. The machinery suppliers were also busy throughout as new technology drove interest from fabricators at all levels though especially in seamless welding.

With sales leads taken in abundance and the general feeling that quality and genuine interest was high many exhibitors were keen to stake their place at the next FIT Show, which was confirmed as taking place in two years time on 21st, 22nd and 23rd May 2019.

Almost half of the available stand space for the next event was contracted or reserved before the doors closed, with this figure expected to grow significantly during the weeks following this years show as companies consider their performances and look ahead to 2019.

The sold and reserved advanced stand sales figure was all the more impressive with the further 25% increase in space that was announced for 2019. This represents a doubling of the FIT Show in just two events.

The FIT Show’s Matthew Glover says that once again so much of the success of this year’s FIT Show is down to the efforts of exhibitors: “As our marketing campaigns emphasise the FIT Show is all about the people and companies that exhibit. Exhibitors have once again worked hard to promote the event and those efforts, combined with the biggest FIT Show campaign ever, succeeded in boosting visitor numbers once again.

“And when the show opened visitors were greeted with the most creative and beautiful stands; everyone involved with the building of this event commented how impressed they were with the efforts made by exhibitors.”

GIMAV states: no Exhibitions in 2020, but the 2021 calendar must be followed
GIMAV official statement gathers the Companies position: “participating in Exhibitions during 2020 is nonsense” and sends a message to the Organizers: “avoid an overcrowded calendar in 2021”.
Mappi chooses not to participate to Glasstec 2020
In our life priorities come before business. Safety is our first priority. Customer support, constant search in solutions and innovations for a better world, and unconditional love for the glass industry, remain at the top of our hearts and minds.
GPD 2019 – Market Trends in the Glass Industry (1/3)
This week, we continue with 3 videos from the Market Trends in the Glass Industry session.
LiSEC will not attend glasstec this year
In view of the far-reaching impacts of the COVID-19 pandemic, it was decided to cancel this year's participation in glasstec 2020, which will take place from 20th to 23th October 2020 in Düsseldorf.
Trosifol will not join glasstec 2020
Trosifol / Kuraray cancels participation in Düsseldorf because of corona pandemic.
FIT Show 2021 - The countdown is on!
It’s official, the countdown to FIT Show 2021 is on. And we want you to be part of FIT!