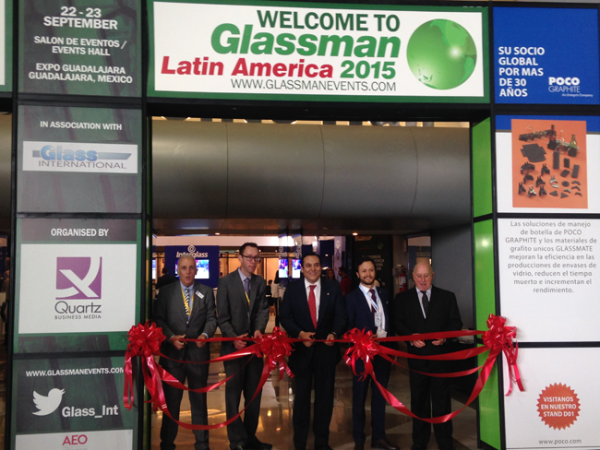 Exhibitors have hailed the latest Glassman exhibition as a resounding success. Overseas companies exhibiting at last week’s Glassman Latin America event in Mexico reported plenty of traffic to their stands.

Some reported as many as 25 new leads as a result of contacts made at the show. The free-to-attend exhibition and conference took place in Guadalajara, Mexico and included exhibiting companies such as Sorg, Interglass, FIC UK, Pennine Industrial, Electroglass and All Glass. Stefan Ribjitzki, Director International Sales, of German company Reckmann Instrumentation and Control Technology said: “We had a really good first day with about 25 leads, so we are pleased.”

Exhibitors reported plenty of contacts from the domestic Mexican glassmaking industry, with delegations attending from the various plants around the country. There were also a number of visitors from the wider region, including from Venezuela, Argentina, USA and Brazil.

Companies to visit the event included O-I Mexico, Fevisa, Grupo Modelo and Pavisa. Exhibitor Samuel Leaper, International Sales manager at E.W Bowman lehrs reported a good show. He said: “We are very happy.We’ve seen a lot of people, most we know and a few we didn’t. We’ve had some good meetings and gained some good leads that we wouldn’t have previously had, so we’re very happy.”

The event included a technical conference and a press conference.

Media from Mexican television, and national and regional newspapers questioned a panel of glass experts about the domestic hollow glassmaking industry during the press conference.

Hector Garica Padilla, Gerresheimer Queretaro’s Senior Plant Director and Jose Luis Velez, Managing Director of Guadalajara’s Interglass, were among those who fielded many questions about the domestic glassmaking industry.

The next Glassman takes place in Abu Dhabi, UAE in May 2016. Webinar: Elevating Exterior Design with Glass and Glazing Solutions
This Glass in Architecture Academy webinar will feature presentations of several case studies where high-performance glass and glazing not only provides a beautiful-to-look-at façade but also increased performance at every level.
GlassPrint 2023 Announces Conference Programme
Below are the first confirmed titles for GlassPrint 2023. More presentations and details will follow in the coming weeks.
2nd Annual meeting for National Associations
The second Glass for Europe annual meeting for glass and glazing national associations took place on 29 November.
Thirsty Thursday Webinar: Advancements in Glazing Technology
The webinar is accredited for 1.0 AIA LU|HSW and is free to attend.
Forel at GlassBuild America 2022 - Video
Forel showcased its latest innovations for insulating glass manufacturing at GlassBuild America 2022.
LiteSentry-SoftSolution at Glasstech Mexico
LiteSentry-SoftSolution are excited to be showcasing at Glasstech Mexico November 30th-December 2nd!