Buildings to generate their own power with innovative glass blocks 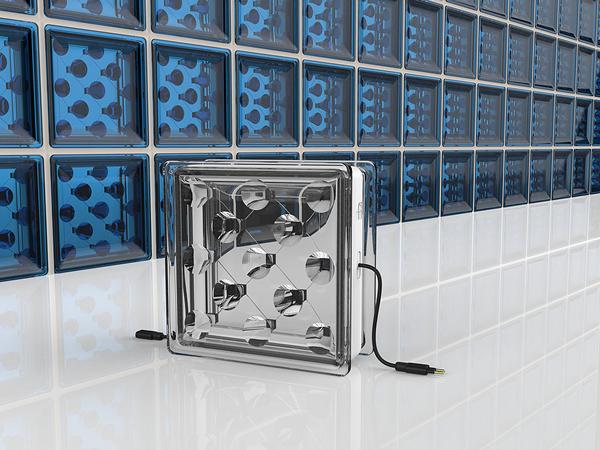 Buildings could soon be able to convert the sun’s energy into electricity without the need for solar panels, thanks to innovative new technology.

Renewable Energy experts from the University of Exeter are developing a pioneering new technique that could accelerate the widespread introduction of net-zero energy buildings through the latest Building Integrated Photovoltaics (BIPV).

These products, similar to the solar tile created by Tesla, can become a part of a building’s architecture to generate electricity. The team have created an innovative glass block, which can be incorporated into the fabric of a building and is designed to collect solar energy and convert it to electricity.

It is thought that buildings consume more than forty percent of the electricity produced across the globe. This new technology would allow electricity to be produced at the site of use, whilst being seamlessly integrated into the building.

The blocks, called Solar Squared, are designed to fit seamlessly into either new buildings, or as part of renovations in existing properties. They are similar to existing glass blocks by allowing daylight to resonate around a property by replacing traditional bricks and mortar with transparent glass bricks.

Crucially, however, the Solar Squared blocks have intelligent optics that focus the incoming solar radiation onto small solar cells, enhancing the overall energy generated by each solar cell.  The electricity generated will then be available to power the building, be stored or used to charge electric vehicles.

The Exeter team, which has created a start-up company Build Solar to market and produce the pioneering product, is now looking to encourage investment to carry out commercial testing of the product, and then aims to take it to market in 2018.

Dr Hasan Baig, founder of Build Solar and Research Fellow from the University of Exeter’s Environment and Sustainability Institute said: “BIPV is a growing industry with a 16% annual growth rate. Setting up a company, which can cater to this growing market shall prove beneficial for the UK economy in the long term.”

“We are aiming to build integrated, affordable, efficient and attractive solar technologies, which have the smallest impact on the local landscape. It’s an exciting venture and one that should capture the imagination of the construction industry, when looking to develop new office blocks and public buildings or infrastructure projects such as train stations and carparks,” said Professor Tapas Mallick, chief scientific advisor for Build Solar.

The Build Solar team believe their blocks have better thermal insulation than traditional glass blocks, as well as providing power to the building. The patent pending technology is at prototype stage and the team are now in the process of fine-tuning their designs in order to test the technology at pilot sites.

Co-inventor and Exeter’s research commercialisation manager in Cornwall, Jim Williams, believes that the timing of the technology is favourable. “It’s now clear that the world is moving to a distributed energy system, of which a growing proportion is renewable. This, coupled with the shift to electric vehicles means that there are substantial opportunities for new ways of generating electricity at the point of use”.

600450
www.exeter.ac.uk
Buildings to generate their own power with innovative glass blocks glassonweb.com

Brexit: harmonised standards as the only regulatory reference for construction products
As part of the ongoing negotiations on Brexit, the UK and EU are seeking to agree on a Mutual Recognition Agreement (MRA) on conformity assessment covering the results of third-party conformity notified bodies.
Guardian Glass signs a strategic partnership with ML System
This partnership will allow Guardian Glass to offer a complete range of both semi-transparent and opaque BIPV product solutions, that help contribute to Nearly Zero Energy Building (NZEB) regulations.
HEGLA Introduces New V-H 150 Seculift For Smart Factories And Secure Glass Handling
The new V-H 150 Seculift from HEGLA is next generation glass handling technology for lifting, placing and manipulating glass on a production floor.
Guardian Glass Project: Here East
As part of a ground-breaking scheme to transform the Here East Broadcast Centre at the Queen Elizabeth Olympic Park, the team at Hawkins Brown Architects came up with a simple concept to break down the building’s bulk: ‘crust’ and ‘core’.
Entries are now open for the Glass Focus Awards 2020
Entries for the Glass Focus Awards 2020 are now open with this year’s event featuring a virtual presentation ceremony, on Thursday 12 November.
25 June 2020 - Online Auction Sale UK - Insulated Glass Sealed Unit
Insulated Glass Sealed Unit Manufacturing Equipment - No longer required by Abcell Ltd. | Location: Birmingham, UK | Bidding ends: 25 Jun 2020

Production and Testing of Kiln-cast Glass Components for an Interlocking, Dry-assembled Transparent Bridge