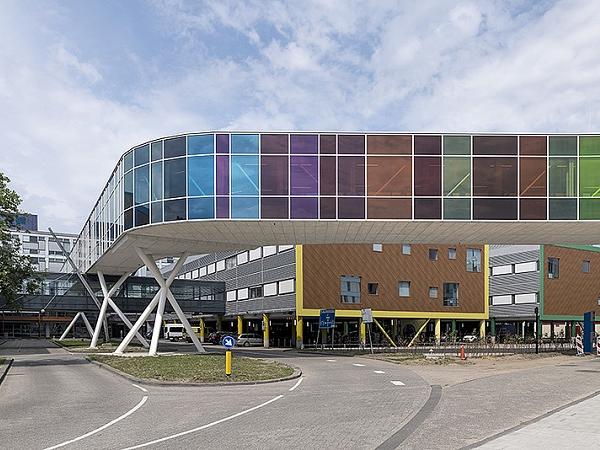 The new built bridge of the Princess Maxima Hospital in Utrecht (NL) has won the Vanceva® World of Color Award™ 2018 in the category exterior. The pedestrian crossing shines in 15 different colors and thus convinced the jury.

With over 50 submissions, the competition from all over the world was huge. But the overall project of the Princess Maxima Center was able to prevail. The bridge with the colored glass façade that was built in 2017 connects the Wilhelmina Hospital with the new constructed Princess Maxima Center for pediatric oncology at the other side of the road.

With the help of the colored glass panes that were used for the bridge a friendly and cheerful atmosphere was created and brings happiness to the mostly grey hospital life. The bridge does not only symbolize the cooperation of the two hospital in the area of therapies but also research.

Basis for the architects planning were studies which show that natural light and colors can influence the health of humans in a positive way and provoke positive emotions especially for children.

The light through the colored windows creates an extraordinary play of light and color in the hospital and thus make even the way to the various playgrounds and play areas in the Princess Maxima Center an experience for the children. In addition, the connecting passage blends in perfectly with the landscape and reduces the sound from the street.

The link between the new center and the Wilhelmina Hospital was very important to everyone involved, so that a faster and better treatment of the children is possible and doctors or caregivers get to their patients quickly without having to cross the wide street.

Parents can also be with their children quickly in emergency situations. The hospital emphasizes that all important areas can be reached within one minute. Functionality and design were thus optimally combined in this construction project.

Two years ago Thiele Glas was also honored by the Vanceva® World of Color Awards™ for the project Corning Museum of Glass. Winning this year’s price in the category exterior is a big compliment to all that have been involved in the project.

SATINAL installed the second EVA-film production line in Italy and launches STRATO® COLOUR
Satinal invested in a new production line and develops a new range of products
This is the process how the super glass is produced by NorthGlass
Super glass provides enough natural light for the building and gives us a better view.
SOLARBAN 70 glass supports net-zero energy design of Newport Beach’s Environmental Nature Center
SOLARBAN 70 glass helped the Newport Beach’s Environmental Nature Center earn a coveted spot on the 2020 American Institute of Architects Committee on the Environment Top Ten Awards list.
Tvitec Sustainable Glass - Memorable Projects
Discover the most attractive projects of the last year that all feature high-performance glazed solutions from Tvitec
Thermoseal Group is an Sunday Times HSBC International Fast Track 200 business
Thermoseal Group has been ranked no. 96 in the Sunday Times Fast Track 200 list of businesses with fastest-growing international sales.
FGIA Recognizes Industry Leaders for Excellence During Annual Awards Ceremony
FGIA recognized the contributions and achievements of its members and congratulated award winners at the Virtual Annual Awards Ceremony at the end of the first day of the conference - Tuesday, February 23.