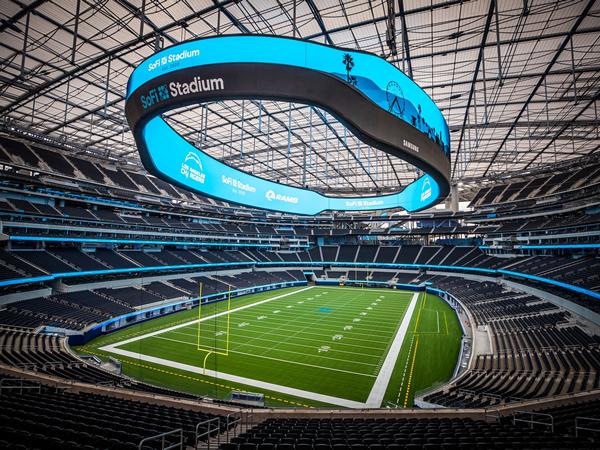 SoFi Stadium marks one of Trex Commercial Products’ largest railing projects to date, which custom designed and engineered an unprecedented 73,000 linear feet of railing for the facility.

Describing SoFi Stadium in Inglewood, Calif., warrants some superlatives. The largest venue in the NFL, the new home to the Los Angeles Rams and the Los Angeles Chargers football teams spans more than 3 million square feet and has a seating capacity of 70,000-plus seats, expandable up to 100,000 for special events. It also marks the biggest commercial railing project ever undertaken by Trex Commercial Products, which custom designed and engineered an unprecedented 73,000 linear feet of railing for the facility.

“The sheer size of this project was unlike anything we have taken on before,” said Laura Rygielski Preston, president of Trex Commercial Products, a leading national provider of architectural railing systems. “In total, our team designed, developed and deployed the equivalent of 14 miles of railing, featuring nine different styles in 125 different configurations.”

Trex Commercial Products’ railing can be found both inside and outside the stadium, from the seating bowl and suites to the concourse and vomitorium areas, as well as the monument stairs and canyons on each side of the facility. Cable, glass, aisle and cane rail in sleek, sturdy aluminum complement the stadium’s contemporary architecture, while drink rails add convenient function to VIP, ADA and standing spectator areas.

For the install, more than 1,500 pallets of railing material were sent to the job site – an average of 2-3 pallets per day over 20 months. Upon completion, the stadium’s railing elements commanded more than 10,000 design hours, 13,000 production hours and a continuous crew of between 20-40 installers.

A distinguishing aspect of this project is the strategic integration of LED lighted rail. More than 5,000 linear feet of multi-line LED Aisle Rail add safety and ambiance to the massive seating bowl area. Combined with 3,000 linear feet of LED Site Rail, SoFi Stadium features the most LED railing Trex Commercial Products has used in any project.

“The lighted rail really enhances and elevates the sophistication of the stadium,” noted Rygielski Preston. “It’s visually stunning, especially at night. We can’t wait for fans to see it once live attendance resumes.”

SoFi Stadium opened in September 2020 and is an unparalleled sports and entertainment destination. The state-of-the-art facility is slated to host a variety of high-profile events, including Super Bowl LVI in 2022, the College Football Championship Game in 2023, and the Opening and Closing Ceremonies of the Olympic Games in 2028. The stadium is the centerpiece of Hollywood Park, a near 300-acre mixed-use development, which will feature retail, commercial office space, a hotel, residential units and outdoor park spaces.