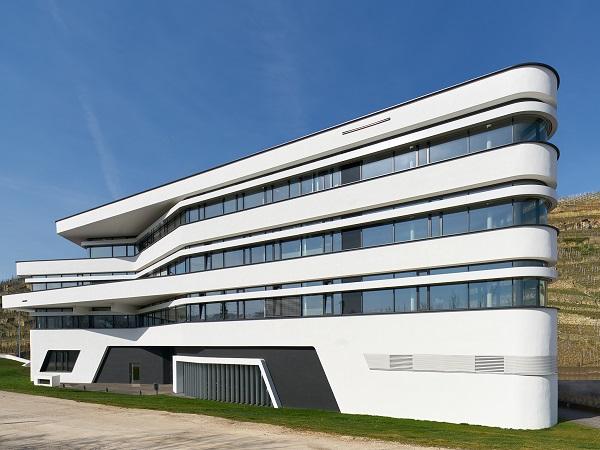 Photo source
The narrow profiles make the façade look like continuous ribbon windows from the outside | Photo: Schüco International KG

Working in the vineyard.

The new headquarters of Südwestmetall in Esslingen not only stands out because of its dynamic and amorphous aesthetics.

In terms of energy saving and thermal insulation too, [fritzen 28] architekten used the latest sustainable technology.

They deliberately chose the Schüco FW 50+.HI façade system, which offers maximum thermal insulation with elegantly narrow profiles. Inside, this created a uniquely light working environment with a view of the vineyards.

Passengers on the train between Stuttgart and Ulm have something new to look at on their journey. In brilliant white and with dynamic forms, the building houses the new headquarters of the Neckar-Fils regional group of Südwestmetall at the western entrance to Esslingen.

It is a place for members of the employers’ association to exchange ideas and knowledge and hold conferences. Communication is the main purpose of the building.

The site made this a challenging construction project. It is the end piece of a newly developed area with heterogeneous usage running along the railway line: a narrow, tapered triangle sandwiched between the train track, a busy road and vineyards behind. [fritzen 28] architekten from Esslingen have created a transition here between nature and the urban environment which is also a striking entrance to the town.

From the west, the building’s floors are stacked on top of one another, segueing into the neighbouring development. This starts with the very first white supporting wall, which runs from the top of the site along the road and then opens onto the underground garage entrance with a dynamic curve.

The main inspiration for the design was the vineyards with their horizontal layering and their curves. They are reflected in the building’s amorphous form. None of the four storeys looks the same as the others.

They recede and protrude, form terraces and create different views from both the inside and outside. The façade alternates between continuous ribbon windows and large white spandrel panels, making the layering even more distinct. 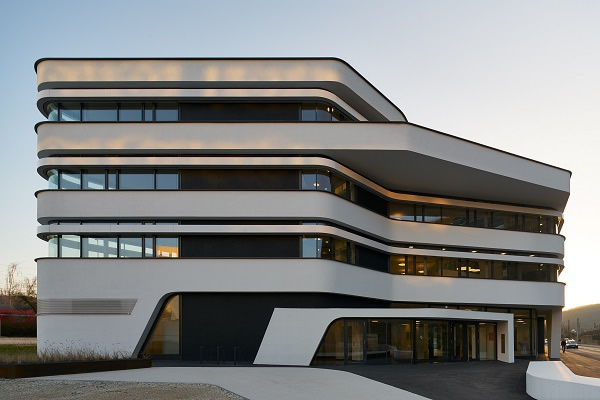 The building therefore appears open and inviting from the outside; inside it is flooded with light and communicative. The central element is a light well, which is surrounded by the areas where people meet – foyer, reception, event areas and so on.

Suspended LED light discs and wide, single-flight staircases reinforce the inviting atmosphere. The green of the surroundings can be seen from every room thanks to the continuous ribbon windows. The surfaces of the interior have been kept simple in white and bamboo.

The sophisticated energy concept was developed by Transsolar. Energy for heating and cooling are derived by the reinforced concrete frame construction via heat pumps from a groundwater well. Activated ceilings control the indoor temperature and a special effective render reduces the room acoustics. 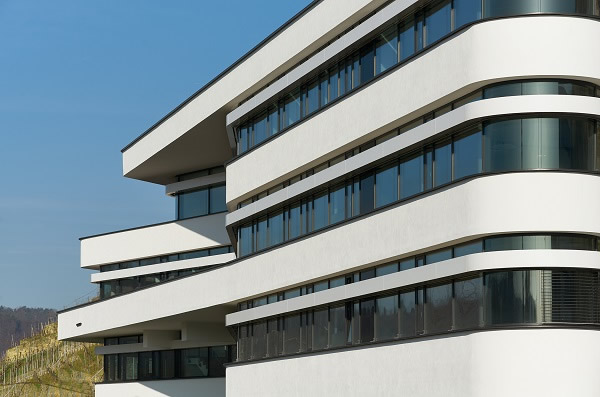 Special sound absorbers in the ceilings make suspended acoustic ceilings unnecessary. Suspensions are only encountered where particular sound requirements make them essential, for example in the open secretariat areas or in the event space.

Mechanical cross ventilation, ventilation via a heat exchanger and a purely LED-based lighting technology are just as much part of the concept.

In terms of energy saving, [fritzen 28] architekten deliberately chose the Schüco FW 50+.HI mullion/transom façade system. This allowed the required combination of thermal insulation and sound reduction to be achieved.

After all, the building lies between a busy road and a railway line. The architects were also won over by the flexibility of the system, which meant it was easy to design the many curves of the façade. One aesthetic reason for choosing it was the narrow face widths of the mullions.

Through them, the individual window units look like Schüco AWS 90 BS.HI+ continuous ribbon windows. A further advantage of the façade system is that it can also be overhead glazing, which is why it was used as a roof above the central light well. 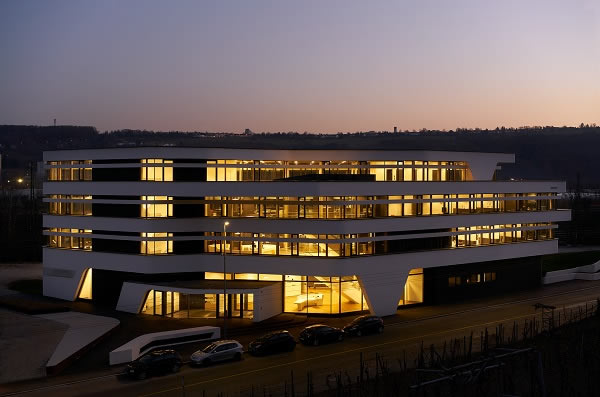 In other areas too, the developers counted on solutions from Schüco. All the fire elements are Schüco FW 50+ BF and Schüco FW 60+ BF.

Schüco ALB active large louvre blades are installed vertically in front of the event space. They allow the right light conditions for every requirement – dark for presentations and films and light for speeches.