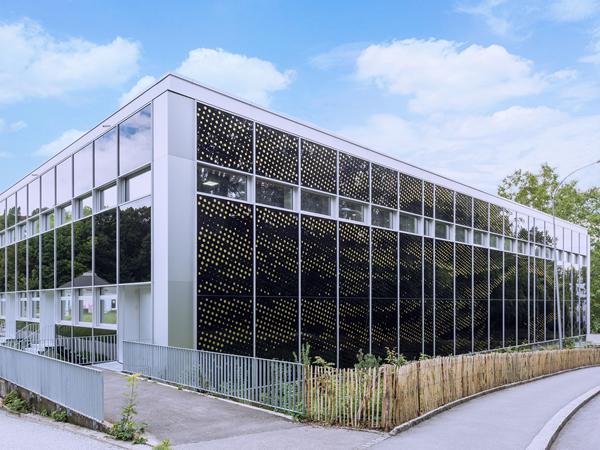 The EPCL vocational school in Lausanne (Ecole professionnelle commerciale de Lausanne) exemplifies how the renovation of a building can turn it into a work of art. The educational complex, consisting of the school building and a sports hall, dates back to the early 1970s and was given a new glass façade as part of an energy-efficient refurbishment project, a façade full of surprises: round “piezo” metal discs were integrated in the façade glass that, like the membranes of a loudspeaker, make the entire building sound like running water.

As a symbolic reference to the River Flon flowing in an underground canal in the same district, this idea was the result of a cooperation between Chiché Architectes and the artist Rudy Decelière. The architects, the artist and a team of experts from Glas Trösch developed an ingenious solution to add a visual accent to the installation.

The architecture of the school complex dating back to 1971 is a typical example of post-war modernism in the region: in the 1960s, the Swiss canton of Vaud developed a school construction programme that was to increase the number of schools cost-efficiently and in a short time in order to cope with the strong growth in the population.

For this purpose, the Centre de rationalisation et d’organisation des constructions scolaires (CROCS) devised a rational construction method which became known under the same name in its abbreviated form: the CROCS system was the basis for a total of 27 school complexes built between 1965 and the start of the global oil crisis in the mid-1970s.

The buildings are characterised by their rectangular floor plans and the cubic shape of the structures, as well as the construction method: a self-supporting, modular metal support structure forms the basis for all floors and rooms, the technical infrastructure and, last but not least, the façade with its large window areas.

Equally characteristic of buildings from this period is their problematic energy balance: while energy aspects did not play much of a role in those days, leaks and the inadequate insulation of the outer shell of buildings have proved to be symptomatic of the architectural heritage.

When Chiché Architectes from Lausanne won the contract for the energy renovation of the school complex in the district of Vallée de la Jeunesse in a competition in 2011, they involved artist Rudy Decelière in the planning of the façade from the outset. With his poetic sound sculptures, Decelière had attracted the attention of the architects in the triennial “Bex & Arts” exhibition.

The architects’ concept envisaged much more for the renovation than just improving the energy balance. The school complex was to gain vitality during and outside the hours of use, take up the characteristics of the original CROCS system as well as the genius loci in a new form.

From the desire to meet these diverse requirements and, at the same time, give the building something completely new arose the idea of constructing a glass façade in front of the building that, also in a figurative sense, would focus on something which had never been seen before: sound waves.

They make the façade sound like the irregular murmur of running water – a symbolic reference to the River Flon, which originally flowed through the area. During the Expo Lausanne in 1964, urban planning measures canalised the river underground so that it disappeared from the landscape.

Art and technology in harmony

After several tests with prototypes in cooperation with the experts from Glas Trösch, the search for a technical implementation of the design concept for a new façade, which was to transform the building into a synaesthetic experience, was successful.

The SWISSLAMEX Colordesign laminated safety glass by Glas Trösch proved to be the perfect solution for the façade elements: round “piezo” metal discs are inserted between two layers of laminated safety glass and wired so that they can each be addressed, using amplifiers, with the sound composed by Decelière.

Around 13,000 “piezos” of varying sizes are aligned in the individual elements, together forming a stylised wave which extends over the entire building on 690 square metres of façade surface. The additional colour foils in black inserted between the two layers of glass highlight the golden shimmer of the “piezos” in the sunlight.

At the same time, the colour-stable glass provides permanent visual protection inside without compromising the supply of daylight. In conjunction with the new façade insulation, the symbiosis of sound and image set in glass also contributes to a better energy balance and, finally, ensures that pupils feel comfortable – whether they are learning or doing sports.

SATINAL installed the second EVA-film production line in Italy and launches STRATO® COLOUR
Satinal invested in a new production line and develops a new range of products
Tvitec: See how each eco-efficient solution fits perfectly to each project
Tvitec launches a new series of fascinating videos on its YouTube channel.
SOLARBAN 70 glass supports net-zero energy design of Newport Beach’s Environmental Nature Center
SOLARBAN 70 glass helped the Newport Beach’s Environmental Nature Center earn a coveted spot on the 2020 American Institute of Architects Committee on the Environment Top Ten Awards list.
Tvitec Sustainable Glass - Memorable Projects
Discover the most attractive projects of the last year that all feature high-performance glazed solutions from Tvitec
Thermoseal Group is an Sunday Times HSBC International Fast Track 200 business
Thermoseal Group has been ranked no. 96 in the Sunday Times Fast Track 200 list of businesses with fastest-growing international sales.
NorthGlass to occupy the C position in the industry
All glass for the new National Gallery renovation project is produced by only one Chinese company- Tianjin NorthGlass.