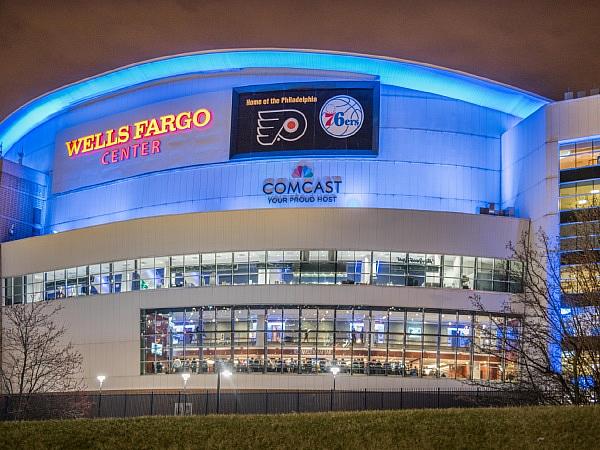 The extensive glazing scope began on the building exterior, where two new runs of curtain wall were cut into the existing north and south façades to offer expansive views of the Philadelphia skyline. The new glass runs parallel to existing glazing, and the vertical mullions in both old and new sections needed to line up.

Straightforward in concept, in actuality, this alignment was challenged by the building’s geometry. The Wells Fargo Center is slightly conical, with framing that angles outward. All of the vertical mullions are segmented or angled toward the middle.

According to Rabinowitz Glass Project Manager Derek Erfurt, the building underwent a 3D laser scan before his team used AutoCAD and Rhino modeling software to understand the complex geometry. “We have some excellent drafters who were able to do intense 3D modeling of the system,” Erfurt explained. “They drew all of the curtain wall in 3D, which added a layer of difficulty to the fabrication process.”

Cutting a new run of curtain wall into an existing building presented additional challenges. Selective demolition was required to understand the interior structure and determine how the new curtain wall could be anchored to the building. The original glass type was unavailable, so selective color matching was required to ensure the new and existing curtain wall glass would match. J.E. Berkowitz provided the final selection, installed within YKK’s YCW 750 SSG curtain wall system.

“One of the biggest challenges during window construction was maintaining temperature and humidity inside the building, especially after ice went down for hockey season in September,” explained Construction Project Manager Geoff Brock of Structuretone. “Before the existing metal panels were removed, we built temporary walls with tarps just inside the building, so that work could progress on the exterior without impacting interior conditioning.”

In addition to the new curtain wall, Rabinowitz Glass installed decorative glass fronts on all of the concession stands on Levels 5 and 6. The white back-painted glass was ordered from Canada, with all pieces ordered based on “hold sizes.”

According to Erfurt, the tight schedule meant the millwork for the 20+ concession stands wouldn’t be available until just before the glass needed to be installed. This prevented simply measuring and ordering. Instead, all glass was ordered based on the millwork shop drawings. “It was almost like putting a puzzle together,” he said. “Little to no tolerance with the glass meant they had to have the millwork pieces perfect. Overall, it was successful.”

Just as athletes can’t change their game clock, the project team was driven by the inflexible basketball and hockey schedules. “You couldn’t just push back the home opener of the Flyers,” Erfurt said with a laugh. Construction manager, Structuretone, and all of the trades cooperated and all work was completed on schedule for a dramatically refreshed venue.

Economics expert John Manzella touches on trade, labor, immigration at FGIA Annual Conference
Those at the 2020 Fenestration and Glazing Industry Alliance (FGIA) Annual Conference heard an economics expert offer perspective on several crucial, global topics.
Hall layout: Updates in some sections at BAU 2021
The new halls C5 and C6 prompted a major re-shuffle of the sections at BAU in 2019, so adaptations for BAU 2021 are only moderate in scale.
Thinking outside the box enables complex curved façade on Hamburg’s concert hall
Located on the Elbe River, on the western tip of the HafenCity in Hamburg, Germany, the Elbphilharmonie is one of the largest and most acoustically advanced concert halls in the world and an outstanding example of modern architecture.
Notification of Extension of Service Deadline for China Glass 2020
Notification of Extension of Service Deadline for the 31st China International Glass Industrial Technical Exhibition (China Glass 2020)
FGIA Annual Conference keynote speaker Jim Hunter champions power of servant leadership
The keynote speaker at the 2020 Fenestration and Glazing Industry Alliance (FGIA) Annual Conference made a case for servant leadership over traditional management.
FGIA recognizes industry leaders for excellence, marketing, more during inaugural FGIA Annual Conference
The Fenestration and Glazing Industry Alliance (FGIA) recognized the contributions and achievements of its members and congratulated award winners at the inaugural FGIA Annual Conference Awards Banquet held Tuesday night in Ft. Lauderdale, Florida.